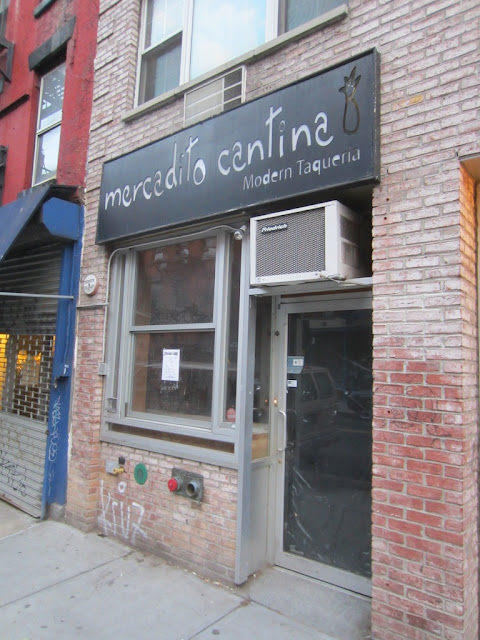 Looks as if the former Mercadito Cantina space on Avenue B near East 11th Street is getting a big-name suitor. The flyer attached to the window shows that applicants repping a new bar/tavern called The Asphalt Jungle will be on the April 8 CB3/SLA committee docket... 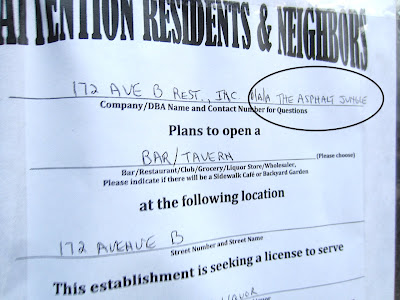 ... and (at least) two of the names involved are part of the team behind Dutch Kills, the popular Long Island City cocktail lounge where bartenders hand-cut block ice down to size for cocktails behind the bar. (You can read more about their ice program here at the Times and here at Forbes.)

One of the applicants, Richie Boccato, is a veteran of Milk & Honey. He also co-owns tiki lounge Painkiller/PKNY on Essex Street, among other ventures (including Sweetleaf). We emailed Boccato yesterday afternoon to find out more about The Asphalt Jungle.

Previously on EV Grieve:
About Mercadito Cantina closing:'Open letter to EV Grieve and CB3' (58 comments)
Posted by Grieve at 6:16 AM

"...where bartenders hand-cut block ice down to size for cocktails..." I guess that's supposed to suggest swanky artisanal. IMO it comes off more like third world cruise ship.

OMG I'm so sick of the crappy tourist bars in our neighborhood (if you can even call it that any more).

A complete waste of time and money and another place for people that worship at the altar of Kardashian type douchebaggery. That space will not get a full liquor license, if Mercadito Cantina which failed miserably blamed it on lack of full liquor license. See above "Letter to CB3" from a worker at former space. Also across the street, the former restaurant Ouvo blamed the lack of full liquor license for their failure. Then how can this place in the same area expect to get a liquor license? 11B Express an affordable family restaurant that is a real plus to the community had to wait 5 years to get just a beer & wine license. That space (former Cantina) is not far enough from the church on E.11th Street to get a full liquor license and that space is not deemed a commercial space, it is as per the building of the structure set aside for community space or for a gallery type setting. Finally, they are in the moratorium zone that is not granting any new liquor licenses. So I don't think this will even get the light of day. Here's a thought, how about another affordable restaurant in that space that one can actually have a meal for less than $50? Or a take out foods place similar to a Garden of Eden or something? There are a bunch of these new "fancy" drink places in the neighborhood and they're all half-full and way overpriced and have Zero relevance to the community or its history or values, just carpetbaggers who cater to douchebaggers for the fast dollar then close up and go on to the next trendy bandwagon to jump on. How about something that is conducive to this community?

Thanks,
25 year East Village resident, who enjoys nightlife but thinks we've got enough places to drink...

"that space is not deemed a commercial space, it is as per the building of the structure set aside for community space or for a gallery type setting"

I have heard this before. Do you have the information to prove this? The D.O.B website doesn't indicate community use. It would be helpful if you could give more information.

Also,
Affordable restaurants don't exist anymore because of the high rents. We either have pizza, falafel, McDonalds, Subway, San Loco or expensive. It's either one or the other for now. So for now I will take a low establishment over another expensive restaurant any day. The upscale places are killing us. Need to ward them off now.

It just happens that 11B has turned out to be a neighborhood joint. I think because of the concept and design. The pizza side is a great fun design. Can do laundry and sit and get a slice. The other room is fun to sit in too, no blasting music, no artisinal food and cocktails and a sweet party space for a birthday. Glad it doesn't have full liquor.

@anon 5:06 - please share whatever info you have about the community-use facility requirement as it will help stop this place from moving forward and prevent residents from having to fight new applicants every couplf of months. Also if you live nearby please send a letter to CB 3 in opposition or better yet please attend the CB 3 SLA committee meeting on April 8th.