Subway taking over from Ben & Jerry's on Third Avenue 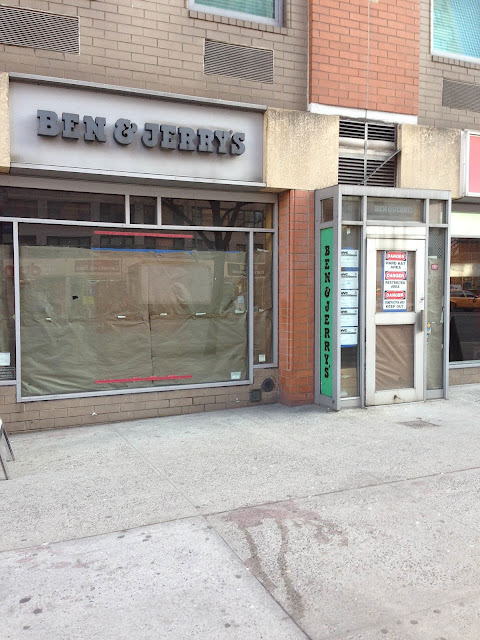 In recent weeks, the for rent sign came down and contractors arrived at the former Ben & Jerry's on Third Avenue between East Ninth Street and East 10th Street. The ice cream shop closed after 22 years here back in September 2010, as Jeremiah Moss first reported.

The space has remained vacant since then.

We asked Richard Colligan, proprietor of Metroplis next door, if he knew who the incoming tenant was.

Yes he does — it will become a Subway.

So this will reverse the trend of Subways closing around here ... like the franchise on East 14th Street and the one on Second Avenue near East Ninth Street ...

Previously on EV Grieve:
So what's going on with the former Ben & Jerry's space on Third Avenue?

Metropolis: 20 years of selling vintage clothes in the East Village
Posted by Grieve at 6:00 AM

Two of my favorite places--Metropolis and Saint's Alp Teahouse--are on this block. I won't be going to Subway, and my guess is it won't last if all the other Subways in the neighborhood are going out of business.

And of course we have all heard, I presume, that the first Denny's will open soon somewhere downtown. Bets on how long it takes them to reach the East Village?

At least it'll fit in with the strip mall look of that hideous little stretch of stores just north of 10th St under the NYU dorm. Despite the dorm, I predict another in a practically historic series of EV Subway flops. At this point, the only location down here I could see having any possibilities would be in the immediate vicinity of Union Square.

The village was my favorite place to walk around. It always had new things going on. I liked looking at the new stores and the old ones. The city is always changing and that's what always caught my attention. I was always around there since I was a teen so I knew the stores that closed. One shoe store in particular closed in 2008. It was opened since I was a teen. It was located near the NYU. I'm glad I came across your site on twitter.

I actually miss that goddamn Ben and Jerry's shop. It used to kind of stick out as one of the odd few chain stores around. I had never seen another Ben and Jerry retail store so to me it didn't really seem like a chain. It was a simpler time...

where are all the signs banning subway from the east village? where is all the uproar over chains taking over our neighborhood?

hard to believe the protestors against chains in the area, when they sit quietly by as another one comes in and there is no opposition...

Now THIS is a hoot because when Ben & Jerry's came there the uproar was that IT wasn't wanted in the area. Some people literally must have something to complain about at all times.

Uggh- that smell of subway bread cooked in a dirty dishwasher. Enough aleady with this chain store garbage! Give me the smell of the mexican place on 3rd and 1st anytime!

Those complaining about chain stores have always are self-selective. There have been McDs, KFC, Popeye, Dunkin Donuts, etc. here for decades. Chains for the most part mean that a local owner sources its products, and gets its marketing, from a centralized location. One could argue that all of the bodegas selling Boars Head meats have been chains for 50 years.

To those that argue that there were always chains, yes there were chains but there were also small businesses or local or mom n pop shops. There was balance. Nowadays, most are just chain stores and the local and mom n pop shops have been pushed out. It's not black and white as in chain v. small businesses. Chain stores here and there are ok. But chainstores taking over the neighborhood and opening within storefronts or blocks of each other, it's noisome.