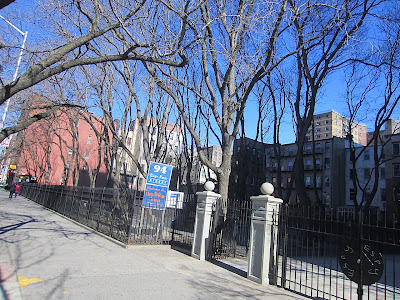 From the EV Grieve inbox... via the Real Rent Reform Campaign...

If you haven't already heard, NYCHA has released their plan to put luxury towers on eight public housing sites (view the official plan here). The plan hasn't been well received by the community, and Chairman Rhea was grilled and heckled for 3 hours, as reported by the Daily News.

At Monday's meeting, we'll hear a special presentation from Community Voices Heard about progress in organizing around the NYCHA infill project, and what how the broader tenant movement can respond.

Previously on EV Grieve:
Outrage over proposal to turn the green space at the Meltzer Tower into private development (35 comments)

Email ThisBlogThis!Share to TwitterShare to FacebookShare to Pinterest
Labels: NYCHA

Don't expect anything from Rosie Mendez. She has sold us down the river.

The only chance we have left in this community is to squash this plan and sue the city to stop the SPURA Plan unless it contains 100% affordable housing.

Rosie supported the SPURA plan and the NYU expansion plan. So don't be surprised if she supports this land grab as well.

Down with Chin. Jenifer Rajkumar-sue the city for the SPURA Plan now.

Sorry, but what's the big beef with SPURA? Half the units are affordable. How is that a sell out? Aside from the fact that we should be building straight-up public housing for low income people, which ain't gonna happen in the current environment of austerity and rampant anti-public-anything pols? Not sure what to think about NYU, but the SPURA deal seems okay... as long as all the new buildings don't turn out to be blue or something.

HUD says that NYCHA has a billion dollars for repairs that it's not spending, so why fund it further.

Bloomberg and Rhea don't want to use this money for repairs, because then people might like living there and will not move out.

Falling down apartments are Bloomberg's tough-love, hoping to drive poor people to get a job and make money, so they won't live like this.

The catch-22 has now caught up with the system, and given Bloomberg a great way to further harrass poor people by selling off their light and air, and parking and parks.

It's practically free living, so it's not supposed to be nice and fancy. But selling off basic trade offs to warehousing the poor is just not right.

Bloomberg is trying to make sure that his impact continues long after he's out of office. Development and real estate are his legecy. If the poor do not rise up and hit the streets, then they deserve what they get.

And if they vote for Quinn, then they really deserve to be driven out of the City, cuz she's just a 4th term for Bloomberg.

I've never been so disappointed in M. Lopez, Mendez, Chin, and the rest of our City's leaders. They know we will not vote republican and are counting on not having a Dem' opponent.

And one more thing: who really thinks that if this land is leased then the money will be used to repair current NYCHA housing? if you do, I have a bridge you might like to buy.

The money from this sell off will just be another reason for state and fed's to remove current funding from the program... just like they did when lotteries were going to solve our public education problems.

Are you for real. It's public land handed over to private developers. This is Bloomberg's forced demographic change. Now they are going after NYCHA. They want the land baby.

We need 100% affordable housing. The SPURA Plan-half of the pie goes to market rate right off the top. One third of the other half is slightly below market rate in terms of price. The other two thirds are split up between "affordable" senior and other "affordable" housing.

Affordable housing doesn't mean low income or very low income housing. It means whatever they want it to mean.

The tenements have been and continue to be converted into apartments for snotty rich assholes.

The Cooper Square Committee and GOLES are weak and submissive.

We need to squash the NYCHA Plan and sue the city for the SPURA Plan.

Just curious, but how do you plan on building 100% affordable housing when the development costs are roughly over $300 per square foot, or even more if you demand union labor to be used?

@Anon 1:56 - It's done all over the country and all over the City as a matter of fact by Common Ground, Phipps Housing and our very own Lower East Side People's Mutual Housing Association to name a few. But the first step is to not sell-off the land to private developers as is the Bloomberg-Quinn model. Second don't listen to people who have know knowledge of how to develop affordable housing like David McWater and Dominic Pisciotta.
Third - see the link below and an excerpt.

"The LIHTC provides funding for the development costs of low-income housing by allowing an investor (usually the partners of a partnership that owns the housing) to take a federal tax credit equal to a percentage (up to 70 percent or 30 percent of PV depending on the credit type) of the cost incurred for development of the low-income units in a rental housing project. Development capital is raised by "syndicating" the credit to an investor or, more commonly, a group of investors. To take advantage of the LIHTC, a developer will typically propose a project to a state agency, seek and win a competitive allocation of tax credits, complete the project, certify its cost, and rent-up the project to low income tenants. Simultaneously, an investor will be found that will make a "capital contribution" to the partnership or limited liability company that owns the project in exchange for being "allocated" the entity's LIHTCs over a ten-year period. The amount of the credit will be based on (i) the amount of credits awarded to the project in the competition, (ii) the actual cost of the project, (iii) the tax credit rate announced by the IRS, and (iv) the percentage of the project's units that are rented to low income tenants. Failure to comply with the applicable rules, or a sale of the project or an ownership interest before the end of at least a 15-year period, can lead to recapture of credits previously taken, as well as the inability to take future credits. These rules are described in greater detail below.
The program's structure as part of the tax code ensures that private investors bear the financial burden if properties are not successful. This pay-for-performance accountability has driven private sector discipline to the LIHTC program, resulting in a foreclosure rate of less than 0.1% - a percentage far less than that of comparable market-rate properties. As a permanent part of the tax code, the LIHTC program necessitates public-private partnerships, and has leveraged more than $75 billion in private equity investment for the creation of affordable rental housing."

Tax credits are perfect for large scale development like SPURA. The only reason SPURA isn't 100% affordable is because there wasn't the political will to make it happen. It could still happen if the City let affordable housing developers bid on the project and lifted the restriction on market rate housing having to be included.

Yeah, 100% affordable and actually affordable would be great -- except that concentrating poor/working people housing in a particular area tends to lead to all sorts of awful things (neglected infrastructure, hostile policing, etc.). And anyway, it IS pie in the sky, however much that fact sucks, in the current political environment. So if it was this or it remains a parking lot for another 50 years, I'll take this.

I know a great deal about LIHTC and how affordable housing is financed. There are 4% LIHTCs and 9% LIHTCs and they vary greatly. 4% LIHTCs are as-of-right if the development receives Tax-Exempt bond financing. 9% LIHTCs are competitive (annually) and are not eligible for projects that receive Tax-Exempt bond financing. In addition, 9% LIHTCs are only eligible for supportive types of housing (formerly homeless, AIDS patients, etc.) and not family affordable housing. It its most basic terms 4% LIHTCs can only fund around 30% of the project and Tax-Exempt Bonds can only fund 50%, so there is another 20% unaccounted for.

IMO, that is why having 50% of the project be market rate is necessary. In addition, the city through the disposition (sale or ground lease) of the properties will generate more revenue for the city coffers.

Regarding Bowery Boy's "If the poor do not rise up and hit the streets, then they deserve what they get":

If they DO rise up and hit the streets, and the NYPD comes down on them in full riot gear like a ton of bricks, do they deserve that too?

They have little recourse and even less protection - they can't win either way, and it's heartbreaking.

Sure why not have the City pay for this instead of spending money on things like corporate tax breaks, stop and frisk etc. Or raise the $45 million privately, it's possible. What would be wrong with tapping other sources of funding available for the homeless, veterans or people with AIDS. What about a mix of supportive housing housing, senior housing and affordable housing? The last point you make is perhaps the most relevant one as to why this deal was struck the way it was struck, which was to fill the city's coffers, but perhaps more realistically the coffers of private real-estate developers. There are some many examples of these type of deals where the developers never quite get around to building the affordable units or making the lease payments or fees they are supposed to. Take Battery Park City for example. Sounds like you know a bit about housing development so c'mon you know there was a way to find the money to build 100% affordable housing, it's just that the administration wouldn't sign-off it. The folks running the show on this kept threatening that if we didn't act now the next administration might not be so ameniable to developing any affordable housing on these lots. A total crock, because everyone knows there isn't a viable republican in the mix so . . .

Shit stinks no matter where it may be.