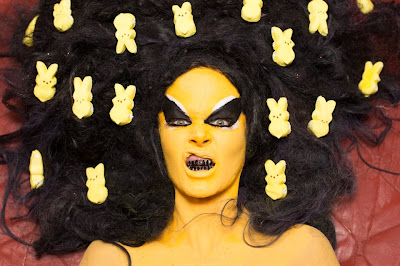 On March 31 (Easter Sunday!), there's an all-ages concert featuring a rare appearance by the Voluptuous Horror of Karen Black and their brand of ferocious glam-punk as well as Youthquake and No Bra at Santos Party House on Lafayette. (Tickets are $15, and available here.)

We asked Kembra Pfahler, the lead singer of the Voluptuous Horror of Karen Black (and an East Village resident) for an update on the band via Facebook.

"Yes, it's a special show. After a bit of a hiatus, Samoa the originator and original guitarist is back! Gyda Gash is on bass and Michael Wildwood is on drums. We traveled last spring to England and Berlin together, but this will be the first large scale Karen Black show with this fabulous band.

"We are also working on a new album together — 'Fuck Island.' We are doing new work from the album in progress like 'Soldier of Female" and 'I Am a Big Black Cat.' I am working on a new feminist movement called 'Future Feminism.' All of the new work is related to this, and saving the world one show or song at a time.

"Youthquake and No Bra are also playing. We are all friends and are looking forward to the show." 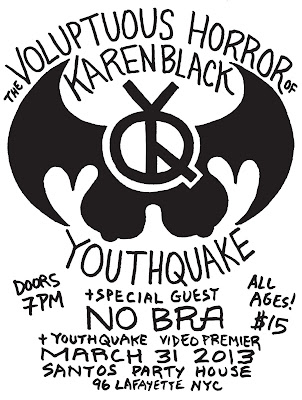 Email ThisBlogThis!Share to TwitterShare to FacebookShare to Pinterest
Labels: the Voluptuous Horror of Karen Black

Kembra Kembra...bringa back all these memories.

Yeah! Looking forward to this!