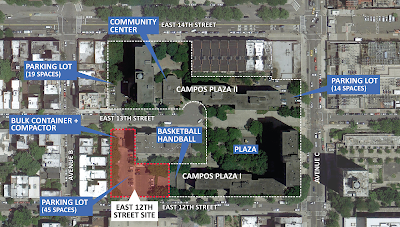 More details are emerging about the city's controversial plan to lease playground and community-center space to developers within public housing areas.

Via The Lo-Down, we've learned that the New York City Housing Authority (NYCHA) finally posted details on the spaces that will be earmarked for private development.

Here's what's planned at Campos Plaza (image above) via the NYCHA website:

Site Area: 26,122 SF (Approximate)
New Construction: 90,000 SF of Residential Floor Area (Approximate)
Note: 20% of proposed residential units will be available to households at or BELOW 60% of Area Median Income (AMI)*


According to the Lo-Down, the plan would see "a total of 2,026 new apartments on the Lower East Side — about 400 of them designated as permanently affordable."

Of course, all this info arrives with about a month to go before the city will issue Request for Proposals for eight NYCHA properties in NYC.

Meanwhile, tonight, Smith Houses reps are boycotting the "public information" meeting about the plan. Per their news release:

“The Tenants’ Association Exec. Committee asked NYCHA to reschedule the meeting in order to give residents at least a 10-day notice and opportunity to review the proposals, but NYCHA is deciding to go ahead anyway. The Authority is making it seem as though their plan is a done-deal and residents just have to put up with it.”


As the Daily News first reported in February, the NYCHA expects to generate $31 million to $46 million in annual lease payments, "all of which will go toward fixing up deteriorating buildings. The agency currently has a backlog of 420,000 repair orders and faces a $60 million budget gap annually."
Posted by Grieve at 1:43 PM

All NYCHA wants is to give a sweet deal to real estate developers and finesse the way for a nice career in real estate for John Rhea, that is the bloomberg's administration model look at Joel Klein. These sham meetings are not real dialogue, anyone can sit there and nod their head while getting a earful as long as they know their payday is coming. Good for the tenants for calling them on their BS

Well, density good, but screwing NYCHA residents out of precious little open space EEEEVIL. Honestly, I don't give a crap if the city wants to lease a parking lot to developers if they can guarantee the money will go to NYCHA housing and not to giving banks tax breaks or something. But that handball court? I suppose Mayor Mediabucks reckons all those kids that live there can just join a gym if they want to exercise so bad

It's particularly galling that the market-rate housing will profit private developers when the state could build, own and profit from it itself. The state easily (and frequently) floats bonds to pay the contruction industry to build everything from prisons to colleges. Happens ALL the time. None of the elected officers I've spoken to about this has shown the least interest in working on an alternative to NYCHA's leasing scheme.

Shame on you Margarita: You sold out for so little - a cushy job from your friend Bloomberg in return for what - betraying a community who has loved and supported you since you came to New York City?

Shame indeed. We all thought better of you and we were all wrong.

I'm okay with the Campos plan, except maybe the basketball/handball court loss (though both are nearby at Tompkins Square). I live near by and looked at the location the other day -- its a parking lot, as advertised. Why not get a higher value from it? It would be nice if some of the proceeds do go to rethinking/enhancing the big open are where 13th Street is closed off, its rather forlorn.

Is anyone organizing a rally? I think we can get a huge crowd for this one.

The Cooper Square Committee and GOLES need to stop being weak and submissive. This can be prevented if they would just stop conforming to the elected officials.

"NYCHA will continue to provide parking spaces for all NYCHA residents with a current legal parking permit."

Curious, how does this permit system work? Is it like a legacy system? Who qualifies? Do they pay?

WHEN IS THE RALLY!
There is EVERYTHING wrong about this and NOTHING right about this. all the crap they say about putting money back into the projets is a LIE, a SCAM. they are gonna keep screwing these poor people as bad as they can and we all need to cry out against this outrage!!! just UNBELIEVABLE! they dont want to fix the projects, they want to get rid of them. bloomberg just gets more and more evil with every passing day, it's insane. he is totally and completely out of control. you want a quick 60 mil? tell the NYPD to stop breaking all their own laws every day and you'll get 3x that!
ps - do you know how hard it is to get a court at tompkins??? have a f*cking heart for christsakes!
http://gothamist.com/2012/12/27/nypd_lawsuits_are_at_historical_hig.php

I agree with Glamma.

Who is getting hurt here? Why is the city subsidizing PARKING anyways?

"Note: NYCHA will continue to provide parking spaces for all NYCHA residents with a current legal parking permit."

Now, there is a good use of my tax dollars. Why is it that I know virtually no one with a job and paying rent that can afford to have a car, but people living in the projects can??????

at anon 5:21 people who live in projects also have jobs pay rent and taxes same as you, before going on a jealous tirade, inform yourself.

There are so many reasons why this is a great idea, a complete win-win for everyone.

I wish this plan were expanded to Riis and Wald Houses where it is greatly needed.

4. To wit, wealthy people have a sense of entitlement, especially for safety and cleanliness. They will call on the police and government for services that will improve the area. Since they are wealthy, the government is more likely to respond. I am not for wealthy people having superior public services, but that is how it is, and this can be leveraged for their low-income neighbors' benefit. Campos has more than its share of violent crimes, and its vast windswept plazas are dancing with litter and leaves. Integrating a Low-income ghetto with the wealthy will improve safety and quality of public spaces.

5. Speaking of vast plazas, 80 subsidized parking spots are blocking the development and preservation of affordable housing for thousands of people. In addition, having vast concrete plazas is dangerous whether it is in a wealthy development or a low-income one.


I think this is a brilliant idea, and it should be implemented and expanded as soon as possible.

It's pretty clear that neither Lopez or Rosie have our backs. Lopez actually responded to someone at the Campos meeting, "Come up with a better idea or shut up," when they disagreed with the plan. But, seriously, let's be honest here, is this the first time either one of them has gone after money instead of looking out for us? Think about it, both of these women are powerful and influential leaders of NYCHA and under their watch, NYCHA's gone to sh!t. Lopez is on the Board of NYCHA and Rosie's former mentor. Rosie is the Chairwoman of the Committee of Public Housing. If they're doing such a good job, then why has it gotten so bad that the FEDERAL government has stepped in? And why is NYCHA's first and only option to kick out the poor and bring in the rich?? Why cant we first cut back on some NYCHA spending like oh i dont know, Margarita Lopez's full-time driver and her yearly salary of $187,147? Or why not cut back Rosie's salary (she makes at least $112,000 for being on the City Council and probably earns an extra $10,000 for being on council committees), especially considering that she's missing like 25% of the mandatory meetings she supposed to go to. These women used to stand up for us, but lets face the fact, people, we've been abandoned by both Rosie Mendez and Margarita Lopez.