'Straight Outta Tompkins' is real, and it is now filming around the neighborhood 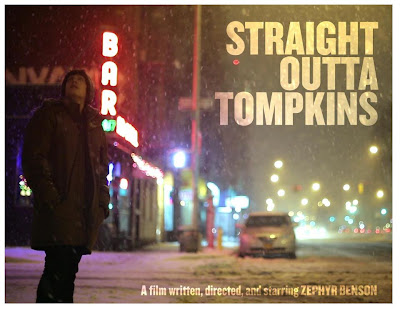 "Straight Outta Tompkins" started filming on March 12. We heard about the film, but, to be honest, we thought the person who told us was joking. You know — a play on Straight Outta Compton. However, it is an actual production. Here's the description via the film's Facebook page:

Seen through the eyes of Gene, a charming 18 year-old, a ‘pitch away’ from a college baseball scholarship.

Abandoned by his family, Gene finds a 'surrogate,’ seemingly more loving family within the underbelly of the L.E.S. drug community.

Gene is faced with one simple decision that could rob him of his youth, his innocence, his life.

Zephyr Benson, who attended attended NYU's Tisch School of the Arts in Filmmaking, is the son of Robby Benson, the boyish-looking actor your older sister totally had a crush on in the 1970s.
Posted by Grieve at 6:20 AM

Sounds even more exciting than my sex life.

my immediate reaction is oh lord, this will automatically become fodder for the forces at work to fuel their agenda of further "cleaning up the hood" aka stripping it of all cultural or socially progressive value..... oy.
can't they do one on nightmare zombie yuppies taking over??? that's the real problem!!!

Gene: pitch away from a college baseball scholarship; Gene finds a 'surrogate,’ loving family within the drug community; could rob him of his youth, innocence, life -- Requiem for a Dream, Tom Hagen, Lance Armstrong, Boyz n the Hood, Menace II Society

white boys acting out their fantasies of being hood. it's like 1994 again without the actual danger.

Ain't happenin no more there!!

"white boys acting out their fantasies of being hood. it's like 1994 again without the actual danger."

I just gave the Mr. Wonderbread research materials and a clue.

Will this film be an epilogue to the Veronica Mars movie? What's next, a Kickstarter fundraiser? Damn! another clue to the filmmaker.

sure john gringo spacley would give a Wine and Dine on this..

This will be the best thing I never saw.

Will there be an appearance by the young Carrie Bradshaw to give us a taste of what the neighborhood will become?

looking through the eyes of ❤ said...

(Not to take away from Ice Castles, which is a classic and good film even though it can be melodramatic and schmaltzy.
And Lynn Holly Johnson --yeah, yeah, yeah -- had that All-American girl, feminine, demure, innocent look yet sexy, sensual,and seductive -- rawr! Those Girls and Carrie Bradshaws have nothing on her).

Well, unfortunately, the guy will probably go on to direct a hollywood feature in a few years after this. He'll be the next Brett Bratner.

Gene: pitch away from a college baseball scholarship; Gene finds a 'surrogate,’ loving family within the drug community; could rob him of his youth, innocence, life -- Requiem for a Dream, Tom Hagen, Lance Armstrong, Boyz n the Hood, Menace II Society"

is literally an idiot who just named movies that loosely have to do with the story. Boyz n the Hood has nothing to do with someone getting a scholarship and living in the drug ring. You should really rewatch all of these films before you go on listing them.
Its unfortunate that people cant appreciate young talent, wherever it may come from. Money aside, it takes a lot of hard work and dedication to write, direct and star in a feature film.

Talent? Straight outta ignorance. Those themes and stories have been done before. And much like hipsters who are trying to re-live the past that they've never lived and have only seen in books and films, this is what the Zephyr is doing. And you could've just replied to @ 11:23 am, instead of copying and posting the comment. And much like this film, he's copying and pasting from those films and books. The only idiot here are you and the filmmaker for even trying to make this and being insolent for using LES/EV/TSP and a play on Compton. Thanks for commenting, someone from the filmmaker's clan.

Ugh- another story about college kids trying to be badass, like "savages" and "spring breakers". A little college kid is taking the drug world by storm-like everything else they think they can start at the top because they're so special.

Hahahaha! It really is the suburban white boy dream to be a thug! This is why the yuppie boys always request gangster rap in my bar. Little whitebreads trying to be hard. Wish they would just embrace their yuppiedum and go back to buying cars and yachts instead of pretending to be part of the class that they are oppressing by their very existence.

He's twenty! Apparently though, he does have special "New York Accent" skills ...
Silliest scenario ever.

if they can sell it to will ferrell he can make this legit!

My hope to you for success. Ignore the negative posts
from obviously bitter people!