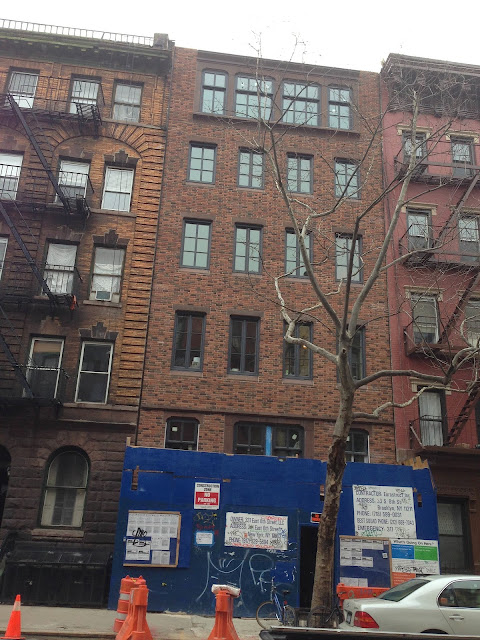 Well, you can now see more of David Schwimmer's new mansion on East Sixth Street, as Curbed pointed out yesterday...

We took a photo ourselves. Still got some plywood to go for the full reveal.

And a few other comments:

"not sure why a multi-million dollar celebrity would want to live in such an ugly building with tenements on either side."

Here is David Schwimmer's East Village home
Posted by Grieve at 5:50 AM

It's a hell of a lot better than I feared and expected. But still sucks they chose to tear down the original building.

As bland and featureless as he is.

1) I would have lost AT LEAST 99% of those jobs.
2) Been the laughingstock of the local restoration community for DECADES.
3) Been TOTALLY ashamed of myself.

What, is this guys' career goin' so bad that he couldn't afford a bit of ornate brickwork? Hell, I could have shown him AT LEAST 3 repositories of brick from the EXACT historical architecture within a few hundred miles of NYC. Not to mention that it couldn't have been that difficult to restore the brick front that was there already?

NONE of this makes sense.....but there's the rub vis-a-vis current LACK of taste in NYC architecture, and ownership by people who have more money than brains.

Searchers after horror haunt strange, far places. For them are the catacombs of Ptolemais, and the carven mausolea of the nightmare countries. They climb to the moonlit towers of ruined Rhine castles, and falter down black cobwebbed steps beneath the scattered stones of forgotten cities in Asia. The haunted wood and the desolate mountain are their shrines, and they linger around the sinister monoliths on uninhabited islands. But the true epicure in the terrible, to whom a new thrill of unutterable ghastliness is the chief end and justification of existence, esteems most of all David Schwimmer's new mansion on East Sixth Street; for there the dark elements of strength, solitude, grotesqueness and ignorance combine to form the perfection of the hideous...

The hating comments on curbed are funny and hysterical, as they always are. I have to say I'm pleasantly surprised - it could have been better, but it is miles ahead of almost every other building put up in the neighbourhood in the last 5-6 years.

Yes the cornice could have been stronger, yes the brick is a little different (although that may also be a trick of the photographic light). Overall, the proportions are decent, the windows are good; I expect that a casual observer wouldn't notice the difference. It's surely a hell of a lot better than the cheap Miami "look at me" Karl Fischer shit that has been going up everywhere else.

Should he have rehabbed the old building? Maybe. But I'm sure this is a lot more functional and overall it's a decent effort. If everything else going up were to this standard, then we could nitpick, but it's not.

I second both Spike and Gojira.

grateful that it preserves the general charecter of the neighborhood. dont understand why people are so worked up over this. if it werent owned by schwimmer this would be a non-event.

I was on the hating Schwimmer bandwagon, but now that I see this, it ain't so bad. It is keeping with the character of the neighborhood and is way better looking than the modern monstrosities going up all over the neighborhood. Maybe there were serious structural problems that required him to tear the entire building down. That would explain why he went to all the trouble to rebuild. He probably got a good price and was able to create what he wanted. I wish I could afford real estate in this neighborhood.

You're not fooling me, Anonymous. I know exactly who you are. Now quit screwing around and go pick up my dry cleaning!

The reason to get worked up over this is not the design and it's cleverly chosen ca 1880 lintels. Problem is, it replaces a much smaller building that, like most 1830 townhouses, was too small, shallow and short to be quite as upscale as this mansion, which, though more than twice the size of the building it replaces, doesn't provide more housing to the neighborhood. So it's another step towards upscaling of the real estate values of the neighborhood without any benefit to any New Yorkers but Mr. Schwimmer.

It is, btw, a result of the 2008 rezoning which allowed greater bulk on individual lots along the side streets. The rezoning was designed in part to prevent multiple-lot towers which would also have raised real estate values. The demolition of smaller buildings for redevelopment as celebrity mansions is a downside. Demonstrates just how policy, personal desire and the forces of economic growth interact. Note that Schwimmer chose the EV rather than the more tony SoHo. Scary.

I'm betting he never sets foot in here. Six months from now, it will probably be on the market.

@HP Lovecraft from Ken's Kitchen - Oh my God I am on the floor laughing! Hey, maybe that's why he had this place rebuilt, he needed the swimming pool for Cthulhu and Shub-Niggurath to splash around in!

Davis Schwimmer: the most selfish A$$HOLE in the East Village.
And that's saying ALOT!
Nice UGLY FORTRESS you built there, jerkoff.

Nothing manse about this!

I have had an encounter with Mr. Scwhimmer when I used to work for a hotel. He was pleasant and nice and not demanding. Having said that, it baffles me on why a nice guy would do this to a building and disregard the history, neighbors, and neighborhood?