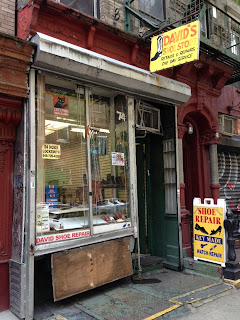 EVG reader Bobby G passes along the sad news that David's Shoe Repair, which has been in the same location on Seventh Street between First Avenue and Second Avenue for more than 35 years, "is closing and moving to Midtown due to an exorbitant rent increase."

Jeremiah Moss confirmed the move in a post this morning. "The owner says the rent has gone up too high, and he is forced to move out of the neighborhood."

Jeremiah has written about the store several times in the past ... noting that we almost lost the shop once in 2008 to a rent hike ... the store was gutted in the fall of 2009, but, to some surprise and relief, the store lived on, with David's grandson taking over the business... which he will now continue from Midtown.

Previously on EV Grieve:
Life with those Yelpers: 'This is one store I wouldn't mind if it ever closed and was replaced with a Starbucks'
Posted by Grieve at 7:39 AM

I LOVE shoe repair shops. I once had a pair of Sabago shoes I had re-soled 2x. Originally paid $120 for them and the re-soles were about $40 each. Best shoes EVER! Countless pairs had heels replaced, polished, etc. TOO BAD to see the shop have to move. But, to MIDTOWN? The rent is better there?

Rent may not be better but there is a lot more business...the kids here aren't buying quality, they are buying disposable seasonal fasci-on.

...a move to Midtown could have to do with the fact that most "business" shoes have soles, instead of rubber disposable type?

I'm glad the shoe repair shops are still going strong in the southern portion of Church St. I'm sure it's just a matter of time though unfortunately, despite the fact that business appears to be pretty solid.

I'd love to see the look on the face of someone emerging from a 25 year coma when they're told that a store had to relocate from 7th near Avenue A to midtown for a lower rent.

On another note, it looks like the Chipotle on 14th and 4th may have closed, last two nights they've been shuttered when I got out of the subway at 7 PM, no one is answering the phone, etc. Anyone hear anything? Can't imagine they could not make a financial go of it, cos they were *always* busy

I used to (1986) live practically next door to David's and almost only buy shoes that *can* be repaired. While I really don't care about someone's manner, I do care about getting the work I want and learned after 2 experiences there that I wasn't going to get good work. Eventually, sad to say, I got to the point where I took (and take) nearly all my shoe repairs to Jim's Shoe Repair on East 57th St. Yes, you read that right. I go to upper midtown into the Barney's/Bloomies Zone to get my shoes repaired. They've been around for ages and do a fantastic job. If I need taps in an emergency, I go into the nearest place, cross-examine the person at the counter and then watch like a hawk to make sure they don't grind the heel down further before putting on the taps. (Guy on 9th near 1st did that to one pair, grinding away what was left of the heel plate right into the leather lift.) Yeah, I suppose I'm an annoying customer; but, I don't go on Yelp about it. If I can't get to Jim's, I take simple things to a place on West 35th just west of 7th avenue. They put up with me.

If anyone needs a neighborhood shoe repair recommendation, I highly recommend Steve Express on 14th between 2nd/1st (closer to 2nd). I've been taking my shoes there for over 10 years now with no complaints, from basic resoling to reattaching heels and replacing zippers.

Of course, if you'd like Flatiron, Gramercy, or Midtown shoe recs I could give those too ... yes, I'm a bit of a nut for shoe repair. Better than new shoes!

Gah! Can't believe I didn't notice that sooner... thanks. Fixed in the post. You wouldn't know that I only walk by there 2-4 times a day!

There was an exterior shot on 7th Street in Moscow on the Hudson that featured an earlier David's sign.