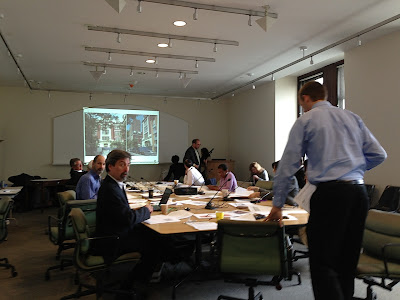 The Landmarks Preservation Commission (LPC) heard public comments yesterday regarding the former PS 64 and CHARAS/El Bohio community center on East Ninth Street. Developer Gregg Singer will need approvals from the LPC in order to make changes to the exterior of the landmarked building for his proposed 500-bed dormitory. (Those changes include adding a raised courtyard space.)

Several people testified against the proposal, including City Councilmember Rosie Mendez and representatives from the Greenwich Village Society for Historic Preservation and the East Village Community Coalition, who want a better plan for the space — one that serves the community.

One person in attendance said that the commissioners responded positively to the architect's plans for renovation. The commissioners did not vote on the proposal and made suggestions to the applicant to modify the plans... the next step will be a public meeting where the amended plans will be presented. (The public can attend this next meeting, but not speak for or against the plans. Date to be determined.)

The former PS 64 is also on the agenda for tonight's CB3 Land Use, Zoning, Public & Private Housing Committee meeting, which is at 6:30 — Seward Park Extension, 56 Essex St. (between Grand and Broome Streets).

Testimony Of Councilmember Rosie Mendez regarding the former PS 64
Posted by Grieve at 6:10 AM

Of course they "responded positively to the architect's plans for renovation" - those jackasses never met a historic building they liked. I excoriate them every time I walk by the sad empty lot where 35 Cooper Square once stood.

I don't know what permits they have in place, but construction has already started on the 10th Street side. They're carting out rubble from the basement. Unpleasant now and I suspect worse later on, if their plans succeed.