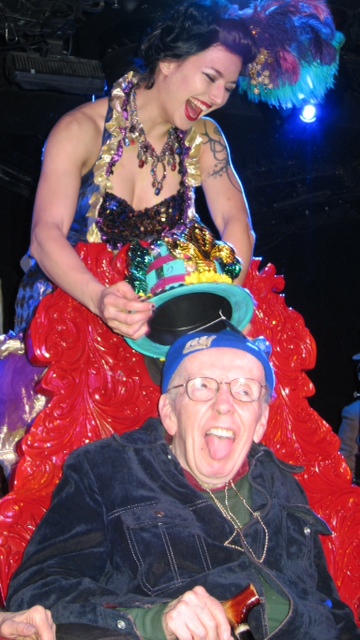 [Being crowned King of the Mardi Gras at a Lower Eastside Girls Club benefit last year. Photo by Greg Masters]

Lower East Side icon Taylor Mead has died after suffering a massive stroke last night in Colorado. He was 88.

In a brief farewell ahead of a full-length obituary, the Times refers to him as "the Warhol 'superstar,' Beat poet, stray-cat feeder and sweet face and voice of an era." 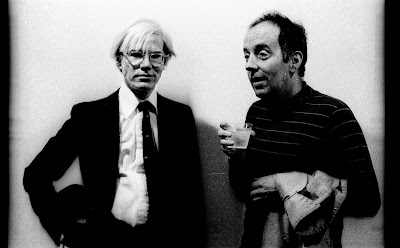 Here's a passage from a profile on Mead published last summer in The Paris Review:

When Taylor drifted to New York, after a stint in the poetry clubs of San Francisco in the late fifties, he found himself in the midst of a vibrant scene. “McDougal Street is where everything was,” he remembered. He fondly recalled night after night spent at the Gaslight, a basement café that no longer exists. Allen Ginsberg and Gregory Corso would read there often. Bill Cosby was a regular. “The police wanted to close the place because of Allen's and my language. The owner would sit there with a shotgun. This was the early days of New York. He sat down there with a shotgun! New York was so wild.”

Mead was a familiar figure in the neighborhood, whether performing at the Bowery Poetry Club or eating at his favorite restaurant, Lucien on First Avenue. He lived in the same apartment on Ludlow Street the past 34 years. Mead continued to live in his rent-stabilized apartment while the rest of the building that Ben Shaoul purchased last summer was converted to market-rate homes. (You can read more about that here.)

Mead eventually accepted a buyout in April and moved to be with his niece in Colorado, as BoweryBoogie noted.

Back to The Paris Review piece, which discussed how Mead found his home at Max's Kansas City in 1965.

After Max’s closed, things weren’t the same. Taylor spent some time at the Mudd Club, where he filmed a public-access television show and continued to read poetry and perform in theatrical productions at La MaMa Theatre; later, he spent time at Max Fish, before, as he claims, he was insulted by the bartender and forced to take his business elsewhere. The Mudd Club closed in 1983; La MaMa is a shell of its former self; Max Fish will, it’s being said, close in the next year due to escalating rents. People and places are gone for good, and during our conversation the East Village begins to sound more and more like a ghost town. Taylor is the last resident, the final holdout.

Aw,heck. Hope he went as peacefully as possible.

RIP to a true New Yorker.

I had heard his health was not good, hence his move to CO. Its sad that another icon of the beat 60's is gone but I hope his work lives on. RIP sir.

Used to watch Anton Perich presents on Cable channel D in the 70's. Taylor was on every week with Susan Blond. Great Shows!

I was at an event 2 nights ago at the Gershwin Hotel, and Anton Perich was one of the presenters, showing some of his video, Taylor was up on the screen as he should be. rip.

This is incredibly sad news. Used to love seeing him perform around town and enjoyed chatting with him in DBA several times. Always imagined that he would live until 100.

He was one of the ones who were absolutely, wonderfully craaazy back in the day.....

Only met Taylor once when we had him on the radio, back in 1973.

RIP, he was truly a unique person.

rest in peace, thou Son of Andy Warhol.

I really liked you.

Used to see Taylor Meade all the time when I lived on Ludlow St way back when. Last time I saw him was at the St mark's Poetry Slam a few years back. What a great, funny character. NYC really isn't the same any more.

My idol.
Taylor Mead.
What a beautiful legend. An artistic genius and the finest of men.
He gave so much to us.
He gave so much to New York.
I was heartbroken to hear this news. The loss of Taylor Meade is a tragedy to our culture-starved society. He was a man among men and a living legend whose presence we were blessed to share. A true New York original and an absolute gem at that.
God bless you Taylor. May you have sweet disco dreams forever.

I can't believe that scumbag Ben Shaoul made this cultural treasure's last days an unbearable nightmare that surely added to the deterioration of his health. Taylor was doing great even just 6 - 12 months ago. Shaoul is a monster who has no respect for anything or anyone. He is a vulture and a pillager of the worst order. He threw 400 elderly, ailing nursing home patients ONTO THE STREET so he could clear the way to turn Cabrini into luxury condos through his corrupt ties and bribery of the DOB where illegal contruction goes on daily (and is yet to be investigated). Shaoul should be jailed for crimes against humanity. Shaoul will rot in hell.

sorry everyone for the shaoul rant. i was just so enraged that taylor mead of all people had to suffer as a victim of that man's greed. he most certainly did NOT deserve that final indignity.
may he rest in peace.

Right on, Glamma...I hope that Meade's archives can be retrieved before Shaoul's demo crews toss them....