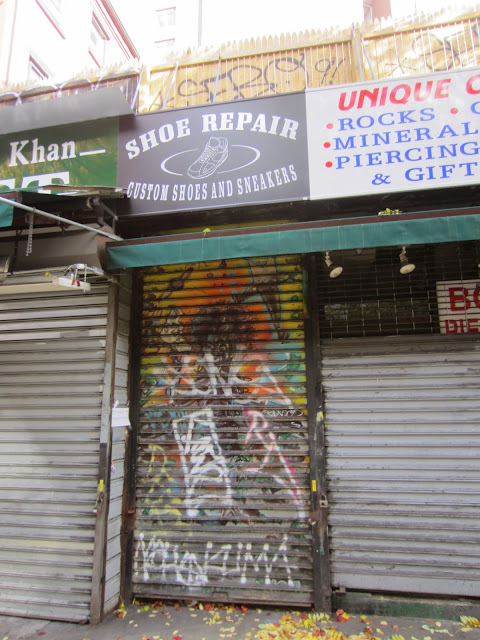 Back in February, we heard that the custom-shoe specialists at East Village Shoe Repair at 1 St. Mark's Place would be closing… unable to continue to make it work here. However, not only did they remain open, but owners Boris Zuborev and Eugene Finkelberg also had the 100-square-foot space renovated.

And that was that… until several tipsters on the block passed along word that the shop closed for good this past Friday. (One tipster said that the marshal was on the scene to seize the store.)

This weekend, a small handwritten note, since removed, said that the store was closed, and there was a number for people to call to arrange pick up of their shoes.

Here's a post from April 2010 on Style Bubble notes:

" ...characters like Boris and Eugene are diminishing in cities... that encounters in grimy holes where they gesture to their faded albums with shoe polish fingers are few and far between... I maybe over-romanticising but I did feel ever so slightly enrichened by a visit to this particular shoe repair joint..."

Previously on EV Grieve:
Reader report: Will a rent hike force out East Village Shoe Repair on St. Mark's Place?
Posted by Grieve at 5:20 AM

It's not just rent. Most shoes these days do not have soles and heels that can be repaired. Look closely at them. So, their business was probably off quite a bit, too. Yeah, they customized, but, I'm sure their bread-and-butter was just re-heeling stuff.

Style Bubble post beautifully put. They were real characters. Had all my platform heels done there in the early 90s!

Damn. And I was just thinking of heading there this weekend to get a shoe fixed.

East Village Shoe Repair will be missed. :( Boris had me at being able to pronounce "COMME des GARCONS" so fluently!

Bummer! Boris was a cool guy. I brought some cowboy boots in there to be resoled and to receive some TLC. He took one look at them and asked if I'd purchased them new because they were Lucchese and worth $1600 new. I'd received them refurbished as a gift and had no idea. They are now one of my prized possessions.

I wonder what became of Barney.

@Sott - I've been wondering about Barney lately. Expected to see him floating in the East River.

@Goggla I really hope he found a good home. After years there on St. Marks, he could probably use some TLC himself. He always made me smile.

A real shame. Nice East European owners who did great work - which they stood by - at the best prices as well. Maybe their prices were too good, sadly. They will be missed.

I ran into Boris this morning, he said that they are MOVING to the former space of David's Shoe Repair on 7th between 1st and 2nd Aves. They will open next week. This is great news!!

you still have my boots that i paid for.. boris where can i retrieve them? please advise

If you find Boris can you please let me know where he is? He has four pairs of my boots!

is the new store on 7th btween 1st and 2nd

Boris and Eugene are now in Bushwick! I just had my shoes fixed and they are awesome. Just off the Kosciusko stop on the JMZ line.