Report: Arrest made in assault on tourist searching for Citi Bike docking station 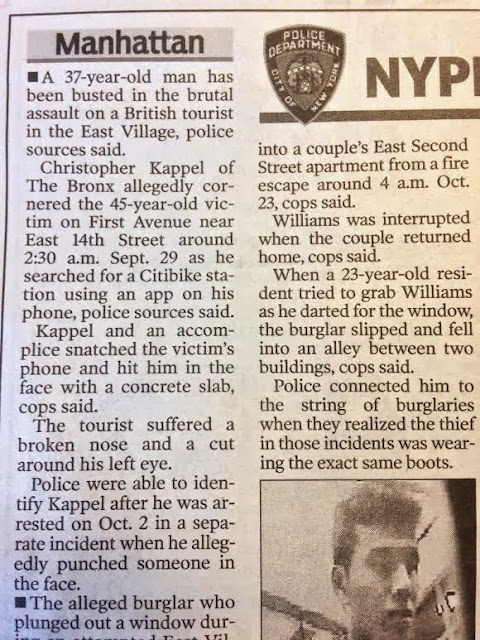 The NYPD has arrested a Bronx man for a brutal assault against a British tourist in the East Village, according to the Daily Crime Blotter in the Post. (Didn't spot this online. for some reason.)

Christopher Kappel reportedly approached the tourist, who was searching for a Citi Bike docking station using an app on his smartphone, on First Avenue at East 14th Street around 2:30 a.m. Kappel and an accomplice struck the tourist in the face with a concrete slab and took his phone.

The tourist suffered a broken nose, per the Post.
Posted by Grieve at 12:19 PM

I'd rather read the story just below, about the burglar who plunged out the window.
Something to brighten my day.

It seems like the amount of undesirables is on the rise in the EV as of late...

You anti-Citibikers have gone way too far this time.

Grieve, could you post about the story below? (plunging burglar) I think that was also in the EV and kinda hope the POS involved has died.

I remember the days when I could afford to hail a cab at 2:30 in the morning. Fuckin' pathetic.

I did post about that a few weeks ago... he was the guy who got caught in an apartment on 2nd when the resident came home. The alleged burglar then fell 5 stories to the sidewalk trying to escape. The item mentions that he is also suspected in connection with several other break-ins around the city. No word on his condition.

Right. If the person who got mugged were driving looking for parking, the perpetrator would be anti-cars. Or if the victim were just someone out for a stroll and was mugged, the pertpetrator would be anti-pedestrian. Such the logic of pro-citilemming. Let me guess, it's the cars and cardrivers fault for taking up all the spaces that should be a Citi Bike docking station that the tourist got mugged.

such the way of the anti-citibiker

How is posting an article about an arrest made anti Citibike?

I'm curious what is a "slab of concrete" - sounds like the bad old days are coming back!

I'm sorry if this sounds like blaming the victim to a degree, however I see this every single night. Dummies on the sidewalk absorbed in their phones at 2, 3, even 4 in the morning.

Don't they realize what city they're in?

(I'll forgive them for maybe not knowing that the much-heralded crime stats are cooked.)

That said, I'm sorry this guy got hurt.

@ anon 4:53, it sounds like he was a tourist using the citibike app to find an open dock for his bike, not yelping about biscuits.

Now, if he were yelping about biscuits...

Meant that comment to be here the billowing bale of bovine Citifodder.

Mutts from the projects enabled by stop and frisk ploicy


Damn, if only he would have been stopped and frisked, they would've found that concrete slab in his pocket.

Does anyone know why the Neighborhood Deli on 11th Street and Ave C closed all of a sudden?