Reader report: Film crew makes woman in walker use sidewalk on other side of East 10th St. 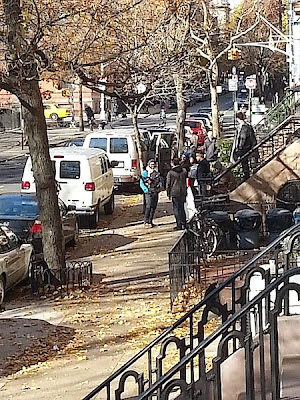 There are some annoyed residents along East 10th Street between Avenue A and Avenue B this morning… While residents mostly try to be accommodating to the endless film shoots around the neighborhood, Jose Garcia notes this small crew crossed a line this morning.

"These clowns, who could not or would not say whether they have a permit, made the woman pictured WHO IS USING A WALKER, cross the street so they wouldn’t have to interrupt their precious work. They also asked the parks people to stop raking." 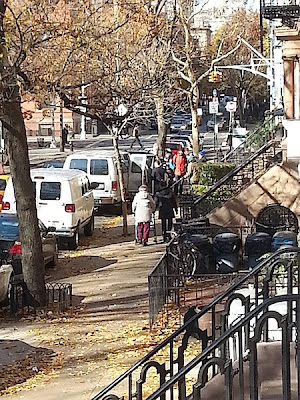 "We were not as polite as we normally might have been once they harassed the woman WHO IS USING A WALKER and bullied her into crossing the street. Happy Saturday everyone!"

Updated 12:15
Apparently the crew is filming a scene for a movie called "Little Galicia."

A resident on this block was told that the crew was from "Little Galicia." This is NOT true. The locations manager wrote in to say that they had proper permits from the Mayor's Office of Film Theater and Broadcasting, "and would NEVER allow our crew to stop an elderly woman from crossing the street during filming." They were shooting at 253 E. 10th St. between Avenue A and 1st Avenue on Friday.
Posted by Grieve at 11:48 AM

Hey, am I the only person in the East Village who feels like heading on over to East 10th Street and screaming my head off?

If they're still there we should all go fuck with them. Insensitive ASSHOLES. Unfuckingbelievable.

I just read they are shooting in NYC until December 7. Are there any location notices posted on the street? Any evidence they have gotten the proper permits?

They do not have the right to tell people where they can't and cannot walk. They just act like they do.

Filming in NYC must be a nightmare, so you have to stop everytime someone wants to walk through. If they're in the middle of a take, you have to stop and wait they finish...or cross the street.

So calm down, i think you're overreacting a little.

IF IT'S AN OLD LADY WITH A WALKER, YES ANON 2:12.
By the way, I worked in film for 18 years on crews with and without permits shooting all over the city and no one ever made an old lady cross the street so we could get a shot. Keep telling me I'm overreacting.

@2:12 I think they receive the permit to make it not a "nightmare" - then they are allowed to do things like this legally.

Filming in the city seems like butter to me. Free parking, tax incentives, the best backdrop in the country..

You just sound like you have no clue what is really happening.

No 2:12 - why should we calm down? This is a woman who obviously is elderly/disabled. Crossing the street for her might feel like a Herculean task. How would you feel if it were your mother or grandmother? I hope people have mercy on you when you are that age.

The nerve of that women with the walker!

I am so tired of the outsiders coming in, throwing up some signs and thinking they own the block. That was not right what they did to that woman. She was an elderly person trying to get down the street with a walker!

I just found ridiculous you were about to form an angry mob for this. I could agree that it was disrespectful, but hey, if you're so bored that want to spend your saturday like that, get your pitchforks and torches and come on.

Yes, 2:12, they ought to have waited for the woman, not "made" her cross the street. Too bad I missed it, would have let them know what for!

Meantime, if "they" are shooting without a permit it may be a student film, in which case...some politeness on the filmers part is called for.

If the "pink" tags are up, they have a permit. In which case, if the crew is unprofessional or rude, you might (a) call the City office of Film, (b) call 311, (c) not see the final product, while letting everyone know why...

It's kind of sad that the good old days of fake NYC (i.e. sound stages in Hollywood) seem to be over. It's fun to see how the streets of the city were invented.

Rather than have a ranting circlejerk, everyone contact the Office of Film, Theatre and Broadcasting for at (212) 489 6710. Someone on the EV Grieve Facebook page also posted this advice: "After business hours call a Supervisor of the NYPD Movie/TV Unit at 646-739-9900."
If this production had a permit, they would show it to you/have it posted on a vehicle; I bet you they don't, or have insurance either.

I love the people on the block who stood up for this woman and shared this with the rest of us. If you see this crew in the neighborhood again, remind them our elder residents could use some consideration.

This actually shows that these guys were nothing but "amateur" douchebags, just trying to play "grownup".

anon 4:23 that's precisely why we wanted to share it with everyone. if you'll look at the trees etc you'll see they did not have permits posted to be blocking sidewalks etc. all best, jose garcia + family. xo

You only WISH kind-hearted strangers like those commenting here would rush to assist you if that had happened to you.

FUCK. THAT. Put your job down for a minute & let the woman pass. Please. You cunt.

Are you sure that the movie is 'Little Galicia'?. Because apparently today they're shooting in another place https://pbs.twimg.com/media/BZnRAVxIEAAnRkV.jpg:large

I work as an extra and have had to stay outside in the cold while they wait for a car to go by, or a horn to stop honking or someone to get into their apt and on and on. They cannot legally make you not walk through. But if they are polite and explain in a nice way that they are shooting no one minds that much. I sure don't mind because it's NYC and that's what they should expect to deal with-a lot of noise, foot traffic and everything else. The longer we all stayed the more money we made. They want to wrap as quickly as they can to not lose the light and most importantly to save money.
I have been on plenty of sets so I can see both sides BUT have never seen a PA make an elderly woman with a walker cross the street. That's insane and they are making everyone hate them even more for blocking the street. It's just really uncalled for when they can let her walk by in the hour they probably spend in between takes. Part of their job is to not anger the locals and keep things running smoothly. So they are doing a lousy job at that apparently.

Earlier this year, another film crew shooting on East Seventh between 1st and A tried to make me (67, with a cane that day due to a torn Achilles tendon acting up) walk on the south side of the street even though I was heading to Butter Lane on the north side. I absolutely refused and marched, well, limped, straight through. Because they were just setting up for the master shot, not filming at all. Fuck that noise.

I work in the industry. If a pa told an old lady to cross the street like that I would fire them instantly. I get so angry at these hack indie productions that think the can just take over. Plus I doubt they had a permit to close the sidewalk...

All this distress for some shitty film no one is going to see. The director had to have heard of this incident. If he had any class, he would apologize for his crew's behavior.

Vuvuzuelas or canned air horns. Position a few people on stoops half a block away from them, then blow them intermittently as soon as you hear the words "speed," or "action."

Let's just direct all of SantaCon there.

Oh god thats right when is Santa Con again? Talk about moving to the other side of the street!

GOOD PEOPLE. THIS IS NOT THE "LITTLE GALICIA" CREW. I CAN SPEAK FOR THE CREW BECAUSE I'M ON IT. WE WERE PERMITTED BY THE MAYOR's FILM OFFICE LEGALLY, AND THERE WERE MANY PARKING NOTICE SIGNS WHERE WE INTENDED ON HOLDING PARKING. WE WERE SHOOTING ON 10TH BETWEEN A AND 1st, NOT WHERE THIS PICTURE IS SHOWING US TO BE, ON 10th BETWEEN A AND B. WE ARE ALWAYS AS COURTEOUS AND HELPFUL AS POSSIBLE ON OUR STREET LOCKUPS SO WE REGRET ANY MIX-UP WITH OUR CREW.