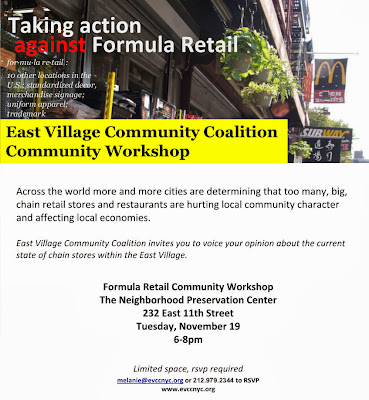 From the EVG inbox… via the East Village Community Coalition (EVCC)...

EVCC is working to protect independent, small businesses within the neighborhood in order to maintain the diverse, unique community that has existed for so long. Over the past four years, increases in chain businesses can be see in both 10009 and 10003 zip codes that make up the East Village.

Currently there are roughly 115 chain stores located within the square half mile the makes up the neighborhood. Several New York city and regional plans site unique neighborhoods and independent stores as extremely important for New York’s future. Yet, according to the Center for Urban Future, 2012 marked the fifth consecutive year there was a net increase in national chain stores throughout the five boroughs.

Other places have already started taking action in defense of their communities. Examples of formula retail regulation can be seen in both New York City’s own Upper West Side and the city of San Francisco. In 2012, after having issues with store frontages being largely occupied by banks and apartment lobbies three corridors on the NYC’s Upper West Side were rezoned as “Special Districts”.

The new zoning limits the store frontage sizes and certain store conversions or changes in use. San Francisco is the largest urban area in the US to have strict formula retail business restrictions. The city zoning only allows formula retail in certain neighborhoods, requires neighborhood notifications before any chain retail is allowed to be built, and can limit the size and type of formula retail allowed in a given area.

I buy all my underwear at K Mart. Should I return it? And my black t-shirts, too. And all my shoes...Almost forgot about that. They were the first store to open up down here...years and years ago. No matter how you feel about chain stores, these guys were here before anyone else. K-MART has to stay. And I'll be damned if some stupid recent arrival from the Midwest with some social agenda is gonna fuck this up. Meet me in the alley.

10 years too late at least.
This place is now primarily a dormitory for NYU brats and a nighttime drinking destination for people from all over the city and region.
Most of the big complainers would just MOVE if not for their cheap stabilized apartments. I don't say this judgementally, as that is certainly my own status as well. I would be gone in a flash but I am too miserly to walk away from this cheeep rent.
The difference is I accept the reality, and deal with it, rather than crybaby crybaby crybaby.
My personal best solution has been to change my schedule so that I am up and about really early in the morning when the streets are not clogged with rich drunken "students" and assorted tourists, and by the same token am asleep for the worst of it, the evenings. Noise is not a big issue as my back bedroom is pretty quiet, but I would pop in earplugs to sleep if I had a front room. I know not everybody has the flexibility to shift their schedule. Just sharing what works for me.

Calm down, Waltie, K-Mart is not on the radar here. It's places like 7-11, with their desire to open another 100 locations in Manhattan, or crap like Subway, Papa John's, etc. - businesses that work out of small storefronts, not out of big box stores, for which there isn't a whole lot of room left anyway. (And FYI I'm a native New Yorker, lived in the EV since the 70s, am deeply opposed to this creeping blandification, and have every damn right to my agenda that democracy affords me.)

I'm afraid that ship has sailed.

Hate to offer such a defeatist opinion but I think that you need a strong community in order to establish zoning laws like that. Not enough people here care strongly enough of about this issue. I think that the transient population is now the majority and what's happening with retail is merely a reflection of our demographics.

This community is filled with slacktivists and people who oppose activism. Why would ANYONE take a stand for anything at this point when they're going to be torn apart by pissants in blog comment sections.

UW,
"They were the first store to open up down here"

That is not even close to being factual. What are you talking about?

As someone who used to shop at Woolworth less than a block away from Kmart, I can tell you that the Gap was on St.M way before Kmart. And there were too many others to count who used to serve this area. Shall we go back to the Wanamakers that used to be in the very building where Kmart currently holds up?

You are usually much better than this, sir. And violent threats, even in jest, are beneath you.

I'm sad for you today.

San Francisco is one city we should not try to emulate.

Re the slam against San Francisco:

Someone has to subsidize the rent control and stabilized apartments that the landlords are forced to put up with. The city certainly doesn't. They just keep taking more property taxes and higher fees for water, sewer, fines etc. the landlords have to raise the commercial rents and only the large chains can afford them. So all of you bitching that are living in those cheap apartments, maybe you should just say thank you instead.

Anonymous as usual you are completely full of shit. This recent article in the NY Post [no less] exposes who is getting the real subsidies in NYC and it is not rent control tenants. Eat your comment Ahole !!! link...http://nypost.com/2013/11/16/luxury-developers-find-affordable-way-to-dodge-property-taxes/

Mr. Penley... huh? The developers get a tax break IF they set aside 20% of their places as "affordable" housing.

EVCC invites you to voice your opinion about the current state of chain stores within the East Village.

Just hope a lot of well connected and powerful lawyers attend this thing. Otherwise, this is nothing more than bunch of people getting together to moan about how much "this sucks". (yeah, we all know that already)

BT - and WHY "can't tenants afford to leave their rent controlled apartments? It's because they have been priced out of every other possible place to live thanks to landlords able to charge extortionate, usurious rents for spaces that used to rent in the hundreds, not the thousands, of dollars. Don't even go there.

The idea of getting zoning for at least parts of the East Village as "special districts" like they did on the Upper West Side is promising.

Better to start now than never. There's a big development coming opposite our new 7/11 on 11th & A, massive development on 14th between A & B, something else on A & 7, just to name three. Maybe we have a chance to influence what comes there. We have a new mayor now, who knows? Why give up without a fight?

I am with Jill W. It's not too late to stem the tide.

By 'first store' I meant a place where I could take care of all my domestic needs, from bedding to kitchen stuff to Chef Boyardee to sneakers and---black t-shirts.

But that Mcdonalds on 1st Ave has been there for ages right? I saw it on Nelson Sullivan's video, the one evgrieve posted last weekend.

I kinda like the presence of that Mcdonalds on 1st Avenue

Yup. Things could get LOTs worse, and any effort to stem the tide should be encouraged and supported any way each of us can.

...would like to know if anyone made it to the meeting and if so, what went on.

I think the reason people are freaking out about 7-Eleven is they said in a bunch of trade publications they were planning on over saturating the neighborhoods with locations and every neighborhood is a target. There's something like 100 more stores scheduled for Manhattan alone in the next three years. That's a lot of 7-Elevens. This separates them from say McDonalds.

Thanks to the greedy pigs from elsewhere who buy buildings in order to eject the actual longtime residents and replace them with transient suburban morons who have no regard for the neighborhood, we have a lot of work to do. But if people are organized and committed, much is possible. We can't NOT fight. Those defeatists who have "accepted reality" are invited to shut up — or join the battle. It really isn't too late for either.