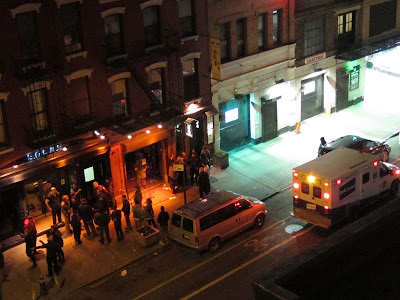 Back in January, some fed-up residents on East Ninth Street between Second Avenue and Third Avenue took to Vimeo to document the unruly behavior that they witnessed outside the bar/club Solas.

We hadn't heard much from the residents… until this past weekend.

Early Saturday morning around 3:30 there was another fight outside of Solas. I was awoken by the sounds of a few women screaming and the bouncers' voices, of which I know by heart at this point. I looked out my window and there was a small crowd gathered around someone flat on the sidewalk. The police and an ambulance showed up. 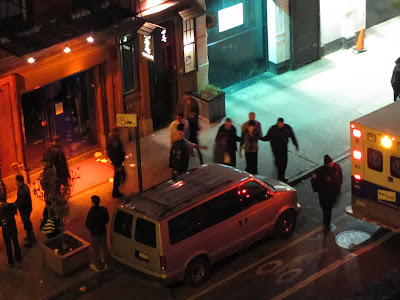 I didn't see the police take anyone into custody but they did tell various parties to leave the scene and go home. Too much alcohol and testosterone. Same shit different weekend. The guy on the sidewalk was eventually helped to the ambulance and was treated. 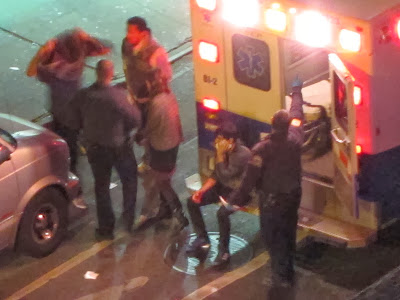 This altercation aside, the residents note some improvement here… since the videos, the residents can only recall 5-6 fights these past 10 or so months...

Email ThisBlogThis!Share to TwitterShare to FacebookShare to Pinterest
Labels: Solas

Solas used to be the place I'd hang out at. Years and years ago. The owner, Sammy, is a total sweetie pie. He wound up being successful beyond his wildest dreams. I know he tries to keep things under control. Let's try to work things out with him...not against him. I'm not a shill...you can look me up.

Uncle Waltie, that is very kind of you to say however it seems that something is going terribly wrong at this place and Sammy needs to change things stat.

residents: you are nothing but a source of alcohol revenue. Signed, Bloomberg Success Story.

just wondering whether or not there were street fights in the 80s and 90s and therefore whether or not this should be embraced. it's so hard to learn the rules here! crack and heroin, clearly, are good. alcohol, it seems, is bad? what about powder cocaine? is that too uptown?

would love to shoot my water gun out the window at the cool guy meatheads.

Rumor has it the guy on the sidewalk got beat down for his late night biscuit money,

Maybe the folks who live above this joint can install a sprinkler system that turns on randomly between the hours of 10:30pm and 9:00am to rinse off the sidewalk?

"crack and heroin, clearly, are good. alcohol, it seems, is bad?"

God, I hate this strawman crap. When can we all agree that just because someone doesn't like a current blight on the neighborhood, that does not mean they want to go back to the way things were around here???

We need more photographic and video evidence of what takes place in the neighborhood on the weekends. Only when the Bloombergs are shamed with the products they create will we ever stand a chance of seeing the city cut back on the bars. Enough is enough.

Uncle Waltie, or anyone else who knows, I'm curious. I used to go there (not often, but maybe once every month or so) about 10, 12 years ago. I remembered it was a fairly large space in terms of NYC bars and that it wasn't the quietest place I'd ever been, but I never recall things being so crazy in there. At what point did it start getting out of control?

I live on the block. The crowd is mostly under 30. Finance looking / preppy guys and the girls who go for that type. The bouncers really do try their best to control the crowds but they're animals. I've seen them throw bottles of water at the bouncers, spit at them, swear at them. They feel entitled to do whatever they want on the sidewalk. Solas resonates with this type of crowd for some reason. The sooner the mgmt figures out why, the better.

Another Fine Mess You've Got Us Into said...

See. There -- we're back to that sprinkler system thing again. It should work out well so long as someone posts signs saying that sprinklers will randomly turn on during the evening. It's not like anybody would be assaulted or anything.

Sprinklers are cruuueeel! The water washes the urine onto my $200 yoga slippers!

Ditto to Uncle Waltie and shanaelyse; used to go to Solas too 10-15 yrs ago, and wondering myself when did it become like this. Places like Solas used to be the go to hang-out/place for a nice quiet evening/night out where one can have a "devoted to conversation, with drink as the lubricant" and "For the couple of hours that you’re in there, you mesh with this community and your personal troubles are shed.” "Traditional pubs foster warmth and fraternity" and where the drinks are not served by mixologists but by "A good publican....a person with character, concerned about the welfare of patrons."

Nowadays Solas and other Irish pubs have become "trophy pubs" that "doubled as pickup spots or resembled sports bars, with 24-7 TV coverage replacing the joys of idle banter", which are now full of drunks, and “Nobody wants drunks in Irish pubs because they’re boring and the last thing you want to be called is boring.” And that's what the EV and most Irish pubs have become -- boring.

The Lost Art of the Irish Pubs

The last time I was here was maybe 13 years ago? I remember the music being techno-ish and the drinks more expensive than anywhere else (and I couldn't get a buyback). I never went again just based on that. Wonder how they became so popular?

i live in a building adjacent to them. their music is loud as fuck and they routinely deny that it's coming from their place! how crazy is that?! the people who run the place don't give a shit that the residential neighbors are disturbed by the music and drunk loud patrons.

if anyone wants to work with me to get them the quiet the fuck down or close down if they won't, please email me solasbequiet@yahoo.com.

I also live nearby and agree, the music is way too loud. Someone has even gone so far as to name their WiFi "Fuck-Solas" lol.