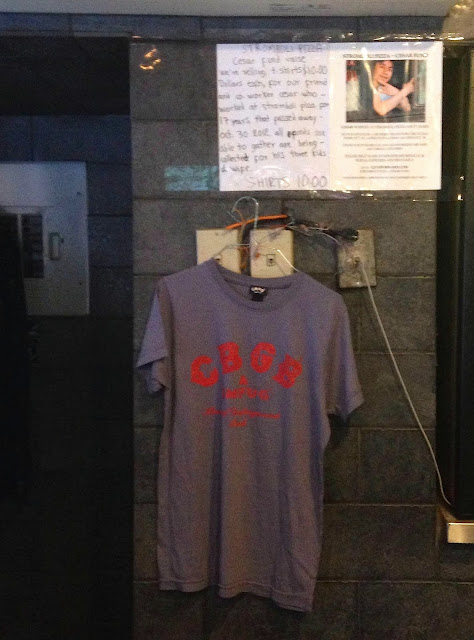 Cesar, a long time employee of Stromboli Pizza on First Avenue and St. Mark's Place, died from injuries he suffered bicycling home from work on Oct. 21. He leaves behind a wife and three children.

Tim Hayes, who owns the CBGB brand and is the founder of the CBGB Festival, was recently in Stromboli and heard the news of Cesar's death. Hayes returned later with several hundred CBGB shirts that he donated to Stromboli.

The pizzeria is now selling the T-shirts for $10. All proceed's go to Cesar's family to help with any expenses.

"I also have 3 small kids of my own. I feel so badly for his family. I hope that it helps," Hayes told us. He said that he'd bring back more T-shirts, if necessary, to raise more funds.

Previously, a resident who has lived near Stromboli since 1985 set up a crowd-funding campaign. With less than two weeks left in the campaign, $2,405 has been raised. Find the GiveForward link here.

What a nice gesture! It sure will take a hell of a lot of shirts to sell to help support a wife and three kids. Any word on if Hayes donated money (along with the shirts)?

The shirts (that cost him money to produce) aren't enough?

Not trying to be hostile, but just curious to know why you did not think the shirts were enough. My first post lacks four letter words, insults, bluster, threats, in fact anything even remotely aggressive, so I wonder why you reacted so negatively to it?

@ A little while ago I said... Come on!! Gojira is right -- the tees were Tim Hayes' contribution and, essentially, a matching gift to anyone who in the community who takes the time to make an actual cash donation.

He donated the cost/value of a shirt and whatever anyone paid to buy said shirt would go into the fund for Cesar.