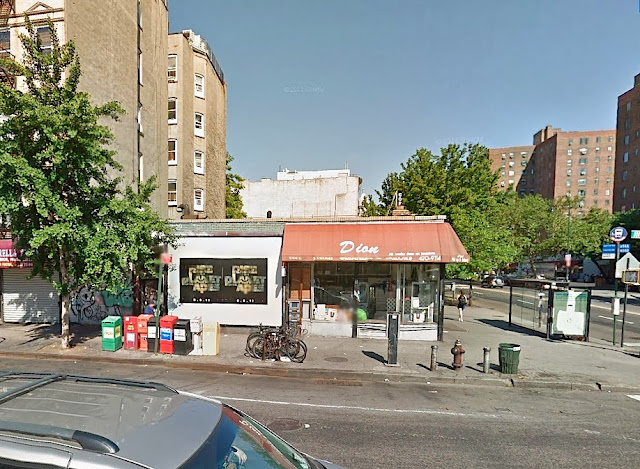 We can't really recall the last time that we saw Chico's 9/11 mural on Avenue A at East 14th Street … it has been covered with ads for years now. (The above screen grab via Google Street View is from the summer of 2011.)

However, the billboard was recently removed, bringing what's left of the tribute back into view, as these photos from an East Village resident and EVG reader show…


The proprietor of Dion Cleaners on the corner was unaware of what the building's landlord has in store for the wall.

Chico created this mural on the night of Sept. 11, 2001. As one Times reader said of the work: "It filled me with hope and sadness and some kind of love for all of the other New Yorkers living through the hours and days yet to come."

And this was the second 9/11 mural to disappear in place of revenue-generating ads in the East Village. Back in 2003, Cooper Union had the "Forever Tall" mural painted over at 35 Cooper Square to make way for ads. (The whole building was eventually demolished anyway.)
Posted by Grieve at 5:30 AM

Email ThisBlogThis!Share to TwitterShare to FacebookShare to Pinterest
Labels: 9/11, Avenue A, Chico

There was a second Chico 9-11 mural, painted at the same time the one mentioned here was, directly across the street on the side wall of Stuyvesant Farms. They left it up for a while but then painted it over and set up their flower stand there. The landlord for Dion waited a couple of years before painting the wall white and setting up the ad billboards. So much for memorials, when there's revenue to be had.

Ah, thanks — that's right. I forgot about the mural across the street. I'm sure I have a photo of it somewhere...

So much better than a crappy ad for a video game! Thanks Chico!

this must mean the laundromat's lease is expiring and they don't rent out for advertising billboards.