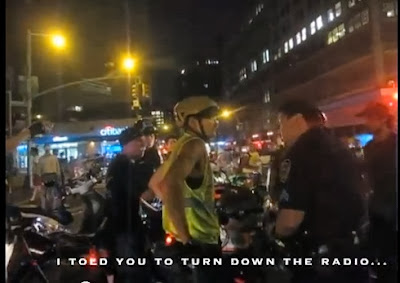 During the last monthly Critical Mass ride, the NYPD scooter patrol arrested cyclist Mellow Yellow on East 14th Street at Union Square... he spent the next 24 hours in jail. The NYPD apparently asked him to turn down the music on his bike... and you can watch what transpires in this video that just arrived on YouTube...

This comes at a time when activists have been calling for safer streets throughout the city ... to date this year, eight children under 8 years old have been killed by automobiles in New York City. (Watch a video about this here.)
Posted by Grieve at 1:59 PM

Just turn it down for half a block... problem solved...

I see nothing wrong with this arrest. Not only was he disturbing the peace by being loud he then copped an attitude and became beligerant.

If his screws had been tightened a little more this never would have happened.

to date this year, eight children under 8 years old have been killed by automobiles in New York City.

Keeping with what seems to be, pretty much, general sentiment around here; I'm pretty sure that's cyclists' fault.

2:25 - Spare us! You're instigating an online fight. That tactic is pretty tired.

I've watched these critical mass rides through the years. The number of cyclists has dwindled. What's up with that?

"Just turn it down for half a block... problem solved..."

False. I was present at this arrest, and the NYPD Scooter Squad and other cops (at least 20 total) are assigned to follow the 30 or so riders who show up for the monthly Critical Mass ride for the entirety of the ride (ie hundreds of blocks).

Oh we're supposed to feel for the biker? sorry. Unless you are a pinhead you never mouth-off to a cop, never - because you will be arrested. You gave them cause, belligerence, resisting, etc. Tell it to the judge but never to a cop.

"I've watched these critical mass rides through the years. The number of cyclists has dwindled. What's up with that?"

The NYPD has been harassing the ride since 2004, when it used to attract thousands. Their harassment has been successful, and they've scared away people from coming. Rides over 100 people that haven't gone through the whole permitting process WILL be harassed if the police have advanced notice.

"playing a radio too loud" is something that the police respond to. Preventing a police officer from doing his or her job in this case the office did not need to shout over some guys radio. Mellow Yellow, that police officer does not make traffic laws, city government does. There was a time I was awakened by this group after midnight and since then I am less sympathetic to whatever they are suppose to be about and find little difference between them and the NYU drunks waking me up after midnight.

So why don't you get a permit?

and he's calling for safer streets by playing a loud radio and disruptive? He's nothing but mellow.

We shouldn't need a permit to peacefully assemble and ride bikes.

Just wait till SantaCon. Drunken bro mayhem, wilding, assaults, destruction of property. And there won't be a cop in sight, yet they have the resources to have scooter cops tail a dozen cyclists all night.

Trying to change the subject to other crimes does not negate one's own culpability. Otherwise one could always argue innocence for any atrocity by saying "You can't arrest me for being a serial killer! You have to go arrest Hitler instead!"

Even if you do get a permit just to ride bikes together, the police will still waste tons of $ to overpolice your gathering. The "Bike Kill" gathering of like 200 people last month had a NYPD helicopter hovering directly over it for hours.

If you want context on the NYPD's harassment of Critical Mass, watch the 30 minute documentary, "Still We Ride." It's on Youtube. Mass illegitimate arrests, injunctions attempting to keep cyclists from gathering, lots of violence, stealing bikes, and more were used to diminish the ride.

I like to believe he was arrested for riding with crappy music playing.

But none dare call it fascism! Ray Kelly off to the million dollar job at JPM with taxpayer-paid security detail.

I agree that (from what was shown) he was being a little belligerent.

BUT, I'm sure the NYPD don't harass and arrest cars playing loud radios - in fact I know they don't since a douchebag was parked outside my deli on Saturday for over 30 mins blasting music (and illegally parked) and at least 3 cops drove past with no issue.

As someone else said above, we all know there will be no NYPD presence at all for the Santa shitshow - certainly not for impeding traffic or disturbing the peace (never mind public drunkenness, lewd behavior, open container, criminal damage, etc.)

As far as Critical Mass goes, the NYPD have done a good job scaring away law-abiding, middle-class people like me (I participated in some a few years ago). I can't afford to be arrested or injured by those guys, so nice work Mr Kelly

The really annoying not mellow at all guy on the bike at least asked asked one interesting question: why aren't cops out arresting motorists in cars killing people? The answer is provided here by the NY Times.

The NY State Court of Appeals has more or less made drivers a protected class when it comes to criminal negligence. The state legislature would have to correct that.

8 kids were killed by cars. And the solution is bikes? Really? We need a city full of people on bikes? That's the answer? The roads are much more dangerous now with all the goddamn bikes flying around in every direction. I'm not even safe in the SIDEWALK!

What a dick! This guy totally antagonized the cop and escalated the situation to which there wasn't much of one until he started screaming at the cop.

6:23pm yup. Agreed. Had the idiot simply provided his ID it would have been input into the computer. If clean, he would have been warned again and let go. But instead...

It seems to me he WANTS to get arrested. He is a sanctimonious schmuck.

News In The Service Of Ignorance said...

@Anony 6:23 PM -- Agreed, pedestrians are not even safe on the sidewalk.

In the last article above, it is clearly shown that bicycles are the problem: "Mr Himon has always maintained a cyclist banged on the back of the vehicle, causing him to accelerate and crash into Ms Green who was on the pavement."

Yes! Less cars! More bikes! Let's get rid of the trains too! Do you know how many people jump in front of trains! No cars! No trains! Bikes only! Even on the sidewalks! In the air! Bikes everywhere is the answer!

Because over entitled bicyclists aren't part of how this city has turned into El Bloombitos Yuppiedome. Riding a lot of bikes in "protest" is as effective as chewing gum in tandem to cure cancer.

@ Anon 5:52
Bikes, different from cars and trucks, rarely maim people and almost never cause deadly crashes. In that sense you are actually safer with more bikes around.


@News in the Service of Ignorance:

Here's another description of that tragic event that refutes the claim the incident was the biker's fault and reinforces the notion that the cab driver was responsible as he acted out of road rage - this one not by the cabby, who obviously had an interest in blaming somebody else, but a disinterested third party witness:


“We were crossing right in the middle of the crosswalk — we had the crossing signal — and as we were crossing with other pedestrians, the cab started to pull into the crosswalk,” said Jeffrey Hayes, of Massachusetts, to Fox News. “[There] was a man riding along this way on his bicycle with a backpack and he got picked up by the cabbie and was thrown up on the hood and up on his windshield. The cab really accelerated at a great speed. We couldn’t believe it. It smashed into the barrier here. There was a woman — maybe a few women — that were standing there. It just nailed her.”

The taxi driver who cut off the woman's leg was attempting to take out the cyclist who only banged on his car because the taxi was trying to cut him off so the taxi accelerates to HIT the bicyclist. Bicyclist goes across the hood of the car and taxi driver proceeds to hit and cut off a woman's leg. The taxi driver should have been charged with felonies. Instead NYPD hassles bicyclists and bike-haters - like commenters here and at NY Post - blame the cyclist. Pathetic.

1:58AM, hahahhaa, you're so cute when you're all up in arms and stuff.

So this guy gets arrested for playing a radio on a bike but the whoo-hoo crowd can stand out in front of Doublewide all night screaming and carrying on and the cops don't do a thing about it? Why target people on bikes but let people on foot be as loud as they want all night long?

Because eyewitness accounts are always so accurate! Lol

I hope everyone bitching here about previous Santa Cons crawls will call the police with the upcoming hedonist event. The more calls that are logged the better. Government and the Police react to statistics not after the fact complaints. My feelings about these bikers is this is perhaps a bunch of well meaning people that have a strong desire to be part of something bigger than themselves, they also happen to be a sporty and combined these 2 interests but unfortunately do more to annoy their neighbors than city hall. Don't argue with a cop, do what they say and stay out of jail. If you want to bring attention to an issue in a big way make damn sure you have all your permits in order and nobody in you pack is a loose cannon. There are parades and other public gatherings in NYC all the time but these guys always seem to get into trouble. As for the debate on who kills and hurts more pedestrians cars vs bikes, the fault lies with people that are assholes and drive/ride without respect for the rules.

It's true that selective enforcement is a serious problem. Whereas this obnoxious individual deserved to be ticketed and possibly arrested, so do:
- reckless motorists
- motorists blasting music
- motorcyclists who modify their engines to be as loud as possible
- drivers who run red lights
etc.