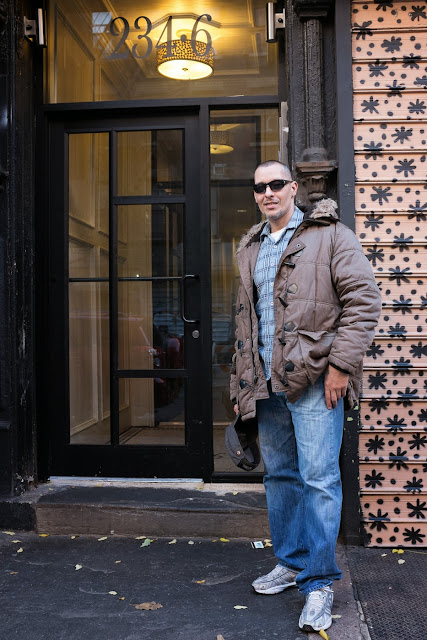 
Name: Manuel
Occupation: Contractor
Location: Monday, Nov. 18 at 2 pm
Time: 4th Street between A and B

I’ve lived here my whole life. I’m from the projects. I grew up right here on 4th Street, between C and D. We came from Puerto Rico. My grandparents came from Puerto Rico and mom came when she was a little girl. My step-dad was a permanent fixture on Avenue C and 4th street, where they played dominoes in that little secret garden. They named it after my dad, Ariel Place. He was a very simple man. Ever since he landed on 4th street and Avenue C he never left. He’d stand there right on the corner. Every day he walked the dog, played dominoes, would go upstairs for lunch, come back down, then go back up and he was done for the day. He was a man of routine — and before that he was a man of gambling. He used to gamble a lot. His funeral was just last weekend. A lot of people from the neighborhood came, left him a bunch of stuff, Dominoes, cigarettes, liquor. His coffin was filled with stuff.

Back then the area was congested — it was really crowded. The Jewish people had moved out and the Spanish, the ghetto people moved in. From ‘75 to like ’85 was the big transition — it happened within 10 years. I remember the parties that we used to have, with DJs in the parks and on the FDR Drive. They would light up everything up in the nighttime and you’d see all these people from different parts of the Lower East Side and from the city. It was good in that sense.

It was also good that my mom could walk down the block. She was a small little lady, about 70 pounds, and she could come home at 2 in the morning and nobody would bother her. And there would be junkies all around the place, but these junkies wouldn’t bother her. They had morals.

This neighborhood here was really good, it was family oriented, and a lot of people were connected. All the parties, the New Year's parties, were all so good. Everything was so good. But drugs and credit messed everything up. As soon as they started giving credit out here and stuff like that, that made everybody fall off into their own depression, because now they owed money. They had exceeded their means of living. Once they put that out there it really put everybody in hardship.

But also back in the day you could make so much money, $200 just to walk out the door. You could make $200 spotting, standing at the corner, saying ‘Bajando’ [Down] or ‘Maria.’ You couldn’t even walk down the street without avoiding drugs. People were yelling like, ‘Executive,’ ‘Dom Perignon,’ ‘Black Magic,’ everybody was just yelling things out.

And the police would come by, look at it and just keep going. I think the agenda was to leave the people who did drugs alone. There was work available in the sense of selling drugs. There was a lot of money out here. This area was like a filter. Everybody had to come through here before they could get anywhere else. Now Jersey is where the drugs are and not here.

Back then the owners were burning down the buildings to get their money to go off somewhere else. There were burned-down buildings every other day. Then, what happened was the neighborhood got an opportunity from Koch — get a building for a dollar and fix it up. That was a great thing that a lot of people did. Now a lot of these buildings are owned by the people. We would rehabilitate these buildings, clean them out and gut them because people were using them for shooting galleries. We would break them all up and just leave the skeleton. We would start with the beams, the reinforcement beams, then from there we would put planks and plumbing in. I was only 13 when I started doing that.

Through that I became a plumber and later on in life I became a contractor. My highest point in life, I had 18 guys, and we volunteered to help out in Ground Zero. It was like the end of the world, armageddon. We were camping out in my utility trucks

I haven’t done anything for the past 5 years. I’ve just been in a slump. I broke up with my girl and I went into this slump using drugs, so that’s stagnated me. But I’m about to jump out of it. Right now, I live in the shelter on 3rd street. They have places like Workforce [Development Center] but they don’t really work. What they give you, everybody has. The people on welfare get the same printouts with the job listings. You go there and there are like a thousand people for one job. You think you have the upper hand by having these people help you, but they are just getting you the same thing that you can get yourself.

This is Madonna’s old stoop, 234. We used to hang out here. This is not the original door. The old one used to be covered in graffiti. She loved Spanish men. She was a real freak. She used to hang out here, she used to go to the World, the Palladium. She was really open with everybody. She’d smoke weed with us and everything. She wasn’t closed off, she was open minded and daring — and aggressive. If she liked you she’d tell you.

Cool interview. I hope this guy can battle his demons and will get offered some solid work!

Madonna went from being a cool neighborhood chick to a cheap weirdo making her sister buy her own air fare to her wedding destination in Scotland. As her brother alleges anyway. Wow.

Another wonderful interview -- with a great photo, too!
I also hope this guy gets his life sorted out.

And I like the design on the pull-down security door on the right..

Another great story in a neighborhood that has seen lots of changes. I arrived to the EV in 81' and landed right in the middle of the drug trade. Since the guys selling had lookouts everywhere it also kept it safe for trade entering the neighborhood to buy as well as residents. The only time I got mugged was when Koch started a crackdown and disrupted arrangement which allowed thugs to move in and capitalize on the chaos. On my block the guys would call, "blue light, red light" which I was never sure was good or bad.

this madonna shoutout is everything!!!

What an interesting history/perspective. Thanks for sharing - I hope he finds work soon.

Hey Manuel, If you are reading this, please give AA or NA a try, it really saved my life. The program "works if you work it".

I took Spanish in HS and always thought they were shouting "trabajando!"

One of the best interviews yet. Buena suerte Manuel

I think Madonna is fantastic. Let me get that out of the way. As a gay man I champion her and everything she has done for me... But I must say that I am her same age, and I came here a little after her, and I remember her from those old days. She was never cool. nobody in those days dressed like her. She wasn't part of the Danceteria, Nan Goldin, Area, La Mama, late SOHO, Greer Lankton,Taboo, David Wojnarowiz, jungle red, art fashion, scene. In fact, she was tacky. Her look and style and vibe were no different then, and no cooler, than the crowd that hangs out on St Marks, near Trash and Vaudeville today. She figured out what to do, and how to act, and how to dress way after she became known, Obviously, she was watching and taking motes and nobody would dispute her brilliant mind... she figured it out, but she figured it out as an observer, way after the fact, and not as an original participant...

Beautiful interview...I appreciate that his personal issues were not made the focus...He is so not "just some homeless dude".He is a bona fide New Yorker with a wonderful heritage.This city could use a few more like this interesting gentleman,if only to keep things real.I wish for a most blessed holiday season.

Thank you for your comment, 9:59PM. I had a hunch that was what she was really all about. Her ambition is calculated on every level.

Really loved this one. sounds like a cool guy. I hope he gets out of his slump