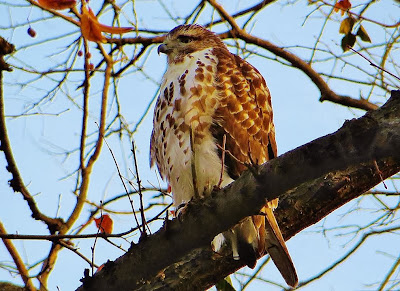 Well, several people noted that this hawk had, earlier in the day, flown into the bus shelter on Avenue A between St. Mark's Place and East Ninth Street… it looked pretty bad for a moment. The bird was lying on the sidewalk, apparently stunned, according to onlookers. But! The hawk recovered … and was spotted "eating a small rodent whole" in Tompkins Square Park a little later.

Photo via Bobby Williams
Posted by Grieve at 9:36 PM

Thank goodness it was ok!

Takes a licking, keeps on ticking. A true EV rapture.

Eating a rodent whole always makes me feel better too.

If this happens again we need to cover over the bus shelter with tape or other kind of means to alert the hawk so it won't fly into the glass again.

Silly tourist hawk.
He's probably got dog-doo all over his nice shoes too.

Shawn, we should do that now anyway to avert another accident! Maybe put EV Grieve stickers all over the glass...