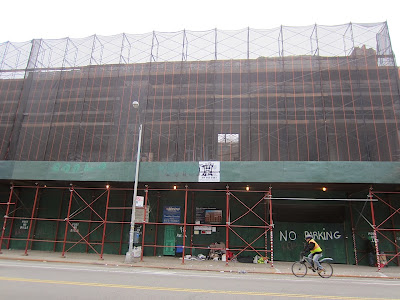 The former 98-100 Avenue A, most recently East Village Farms, is a mere shell of its former self as developer Ben Shaoul continues plans to build a retail-residential space here between East Seventh Street and East Sixth Street.

And we have a few more specifics now about what's next here.

Permits filed with the DOB last Thursday show plans for a proposed building that is 37,042 square feet — 29,881 for residential and 7,161 for a ground-floor retail space ... good for 8 stories and 43 residential units, plus bicycle storage in the basement and an "outdoor tenant recreation space" on the roof. Ramy Issac is listed as the architect of record.

The rendering on the plywood shows a 7-story structure. 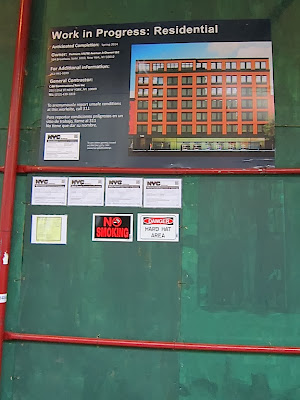 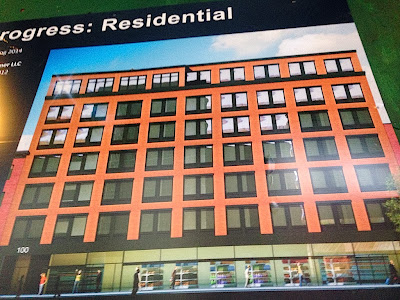 There's also a retail listing (PDF) for the space, which doesn't exactly account for what the new building will look like… 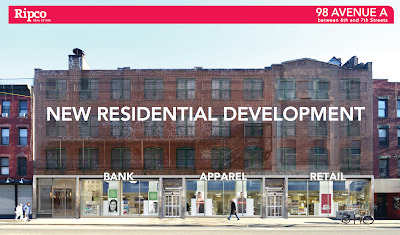 Email ThisBlogThis!Share to TwitterShare to FacebookShare to Pinterest
Labels: 100 Avenue A, 98 Avenue A, Ben Shaoul

That is actually a lot less horrible than I thought it would be.

i am so glad they included a bank. we have so few of them.
and what about a duane reade, a 24-hour pizza place and a bar.

Oh goody! We're getting a bank!

I wish they'd put a Tampon Hut in this location. It's so hard to find affordable, designer tampons in the neighborhood.

Blue Glass - what is so bad about having a bank? They are a utility that everybody needs and there is, what, one East of 1st Ave? That is actually a very small number for a densely populated area.

It'd be hilarious if they actually put up signs that said "Bank", "Apparel", and "Retail" and then "New Residential Development" across the actual building.

That must be a stock image that is used for every single rendering of any new building.

The bank is temporary. Does anyone remember what was originally in any building in the EV?

Lower East Side Peoples Fed Credit Union (2 ATMs down here)
Sovereign @ Ave. A & 2nd
Banco Populaire at Houston just east of B.
Capitol One on C and E. 3rd.
Shittybank on A across from the Sovereign (used to be an EAB)

And, anon 11:30 and Olympia, there is a Chase at 2nd and A. Point is, we really, really don't need more banks in the neighborhood. That's three on Ave. A already.

I believe the sovereign is at 4th and A.

You can't swing a dead rent-controlled tenant without hitting a bank in the EV....

I wish we could just have East Village Farm back in that designated "bank" location. I used that market everyday. Or maybe St. Marks Market could open a second location there? My New Year's wish.