Report: The Jefferson is all sold out 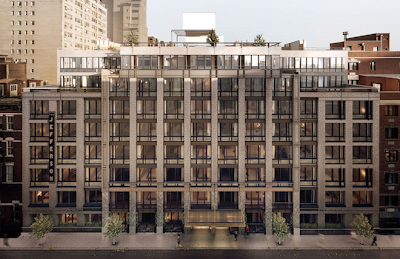 The Jefferson, the new 82-unit condo at the site of the former (sob) Mystery Lot in the North West East Village, is 100 percent in contract, The Real Deal reported.

Here is Jacqueline Urgo, who helped lead the sale for the Marketing Directors:

“The product was planned perfectly for the marketplace, including an exterior that fit in contextually with the neighborhood,” Urgo said via email. “While other developers were building family-sized residences, we planned smaller homes for this marketplace, a decision that was validated by the strong velocity of sales. Our buyers were predominately primary residents, many of whom were already committed to the East Village neighborhood and wanted to move up to this level of luxury and lifestyle.”

Plus, as the Jefferson ads showed, everything works! Unlike that craphole you live in… 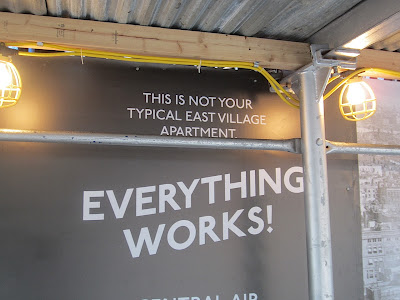 The Jefferson reveals what '21st Century living in the heart of Olde New York' costs
Posted by Grieve at 5:10 AM

Is The Jefferson prepared to deal with the bodies that will burst up through the floor? People were buried and dumped on that lot! Let the haunting begin!

Fuck you Jefferson! All the shit works in my apartment especially my... Nevere mind. Not going there.

Why is it called the Jefferson?

Now I can't stop thinking of the Jeffersons.

WE'RE MOVING ON UP!

Let us not forget the Hitler version of the Jeffersons theme:

This was one of the most dangerous streets on the LES. Instead of the whores and junkies we now have dorm students and bicyclists everywhere. I wonder what's worse. Thank you NYU.


So 14th Street between 2nd and 3rd was "one of the most dangerous streets on the LES"? Aside from the fact that the block is not even ON the LES, I need to know in what alternate universe this hideous danger manifested itself? I walked up and down that block many times from the late 1970s on and remember a bunch of old Russian stores, a couple of pawn shops, the old theater, apartment buildings and the other stuff of which NY was made at that point. What New York were you living in?

I went to grade school on 11th street had to walk through these blocks every day to get to the subway on Union Square, and it was rough. Back in the 70s-80s this was a very seedy and somewhat dangerous block, not the most dangerous but it looked so seedy they made it the backdrop for the movie Taxi Driver. The building where Deniro shot Harvey Keitel and where Jody Foster played a child hooker was around the corner on 13th, so while it wasnt as dangerous as other areas it sure looked like it was. It had a couple of porn theatres like the Variety that were even seedier than the ones in Times Square, some old abandoned movie houses, empty lots and plenty of bums wandering up from the Bowery. It also had some colorful places like Julians Billiards, The Palladium which had Bruce Lee movies on the weekend, a 2nd floor lounge called Carmelita's Reception House which was depending on who you believe was either a lesbian lounge or a hooker hangout, or both, and Disco Donut which had great jelly donuts and linzer tarts. For rock candy we would go to Kiehl's way before it was cool and before it was bought out by L'Oreal.

If you were a kid and didnt know how to handle yourself, this is where you went to get mugged, or solicited by a member of the raincoat crowd. Otherwise it was a colorful, fun, seedy, downscale area that New Yorkers who grew up here miss a little bit more every day.

I grew up on 4th street between avenues C and D in the 60s/early 70s. I think I would know what dangerous means.To glorify the area, it was called "Alphabet City" when I survived that garbage. So, I repeat, 14th street between 2nd and 3rd was one of the most dangerous streets. To Gojira, the LES boundaries go from Chinatown to 14th street and 3rd Avenue. This is the official boundary from CB #3 when I wked there in the early 70s!