There is a Save Jerry's Newsstand Rally today 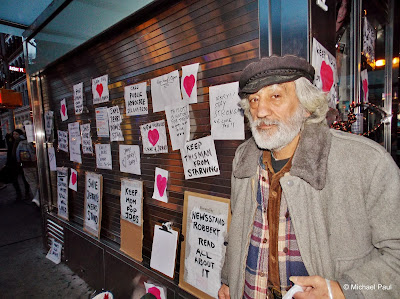 There is a rally today from 4-6 at Jerry's Newsstand on Astor Place outside the downtown 6 entrance.

On Dec. 9, the Department of Consumer Affairs shut down the stand that Jerry Delakas has operated the past 26 years before he could file an appeal with the city to stay in business. (Find more background about this ongoing legal battle here.)

Last Sunday, an estimated 100 people (including Rev. Billy) gathered for a rally here… 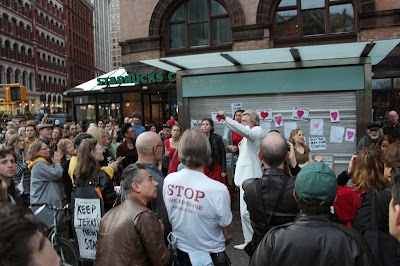 A few other updates about the situation via the Save Jerry's Newsstand Facebook page:

This past Monday, Arthur Schwartz, Jerry's attorney, petitioned Judge Carol E Hull for a hearing on the violation of his due process ... "and we wait to hear if she will hear his grievances."

Meanwhile, as we mentioned in a previous post, a resident who lives nearby continued to rip down the signs of support from Jerry's Newsstand every night… the resident waited until Jerry left the area to remove the signs… well, one night last week, Jerry apparently stuck around and staked out the newsstand… he caught her in the act. They talked, and she agreed to stop. No word on why she continued to do this.

Helping Save Jerry
Posted by Grieve at 10:56 AM

Thank you for sharing Jerry's story !

I would love to hear more about Jerry's discussion with the woman he caught tearing down the signs of support. What is her issue? Why is she against people showing support for the newsstand? Geez, it's a newsstand! It's not like people are trying to save a loud bar or some other nuisance.

The irony is, the anti-Jerry woman is probably a fairly recent transplant who would never have dreamed of moving to NY in the bad old days when he first "inherited" the newsstand. If she was even born yet when that happened. Sa'matter, sister, a newsstand not trendy enough for you?

Jerry has operated this new stand since 1987 when this area was undesirable to live and work in. Where this was a crime - ridden crack - cocaine infested neighborhood. Jerry never gave up on the community and it's residents. Now that this area's real estate is booming how convenient for the city to get rid of him. Please support JERRY DELAKAS.

This will end in tears.