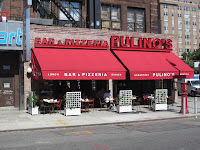 The Pulino's Countdown To Closure Clock has started… Eater reported yesterday that Keith McNally's pizzeria on East Houston and the Bowery will close on Dec. 29.

Next here for McNally and Co. as previously reported by Eater: A French restaurant called Cherche Midi will open in its place next spring.

Also, the EVG reader comments on the previous post about this closure were quite good.

Giovanni said...
Apparently the FAA will have to change their flight patterns now that the big red beacon on Houston Street is going dark. I just hope none of the airplanes trying to find NYC gets lost in the darkness....

Email ThisBlogThis!Share to TwitterShare to FacebookShare to Pinterest
Labels: Pulino's Bar and Pizzeria

Because Lina Frey did so well a few blocks away. Balls.