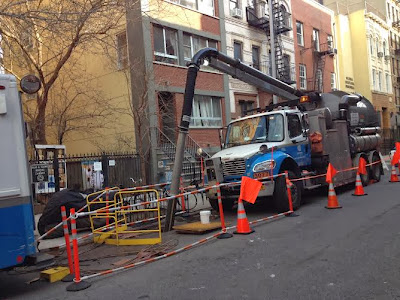 Residents on East Seventh Street between Avenue C and Avenue D had been understandably upset and concerned about reports of stray voltage on the block... after several days of non-action, Con Ed crews arrived to make the necessary repairs on Sunday.

Per the New York Post story on this matter:

"The yellow tape is out there to keep people away from the energized objects," Con Ed spokesman Allan Drury told The Post on Monday. Con Ed workers discovered the problem early Friday but had limited access to the area because of tightly parked cars, he said. Repairs were completed on East Seventh Street late Sunday, he said.

Although Con Ed said that repairs were completed on Sunday, crews have been working at the site every day since then. The photos on this post are from yesterday. 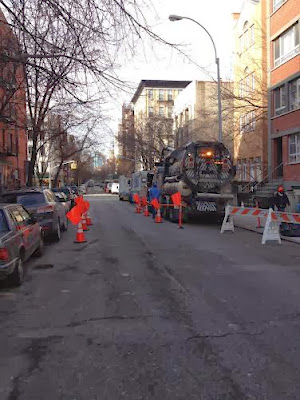 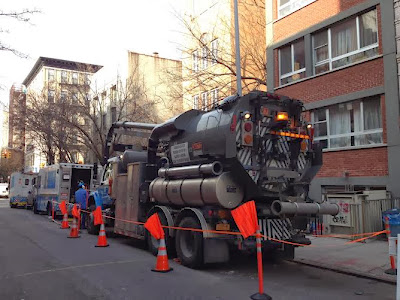 Previously on EV Grieve:
Beware of 'stray voltage' here on Avenue A and East 2nd Street

Guess the voltage strayed some more

I must admit that I do like the term "energized objects". Puts a positive spin on random death from below.

Thanks for the updates on this, Grieve. It's startling how this issue gets ignored. Even the news reports (and many comments on their websites) seemingly minimized the risk, by only mentioning that dogs got shocked, without reminding people of the tragic death of our neighbor Jodie Lane. This isn't just a minor shock that scared a couple of dogs; this is a potentially deadly force.