Yesterday, we noted that Con Ed has caution tape up around some manholes and light poles on East Second Street from Avenue A to Avenue C…

This isn't the only part of the East Village with possible stray voltage. A resident points out that the same thing has happened on East Seventh Street between Avenue C and Avenue D dating back to Wednesday … 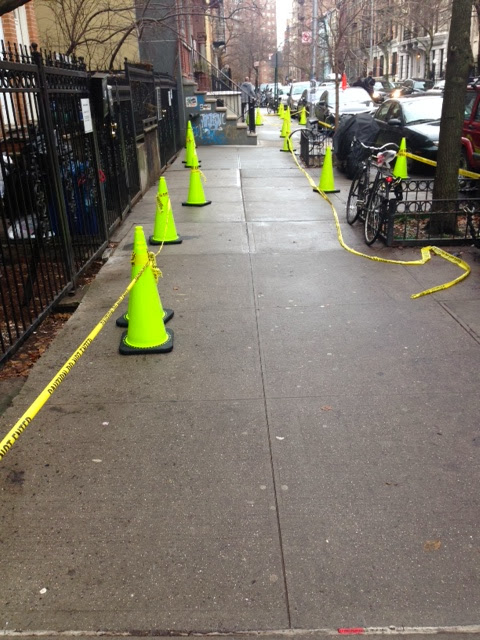 "This area has had current running through the detailed area for days, with none of the residents receiving any information on the danger. The area has NO SIGNAGE warning of the danger of electrical shock," according to the resident, who has documented the various offenses. The resident also notes that a Con Ed subcontractor has sat in his car since Wednesday watching over the scene, but never talking to passersby. 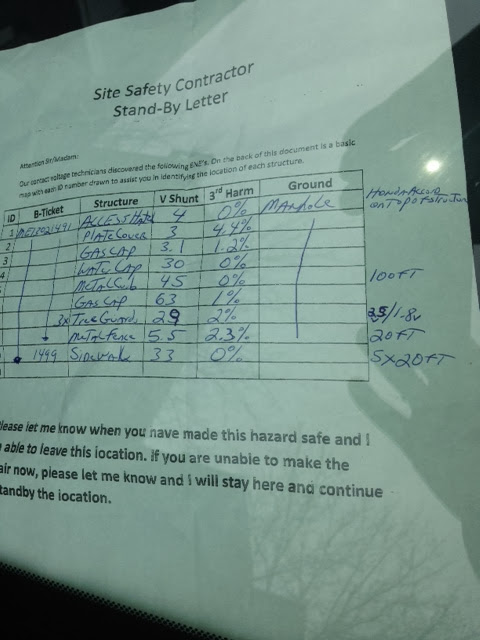 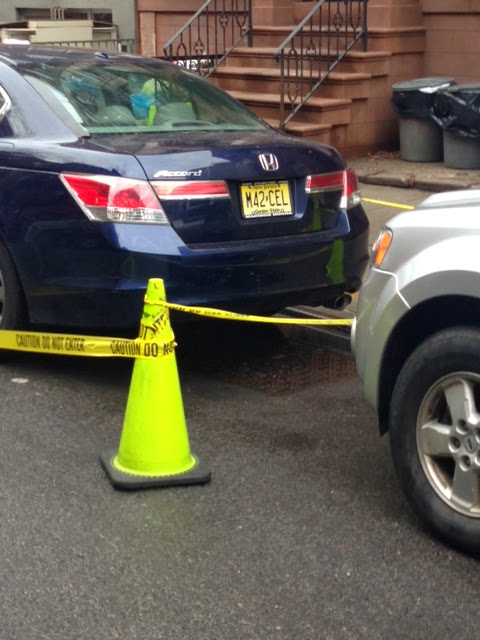 Eventually the NYPD get involved. 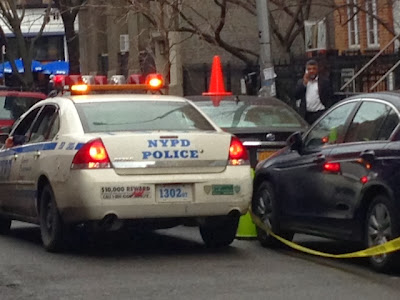 "Con Ed's subcontractor tells the police this car, surrounded by a couple cones and caution tape (no signage provided) is sitting over live wires.
Hmmmmm, might want to let neighborhood folks in on what's happening," said the resident. "Thanks Con Ed for being on it! So on it, that the police had to place a call to get a ConEd emergency crew on the scene." 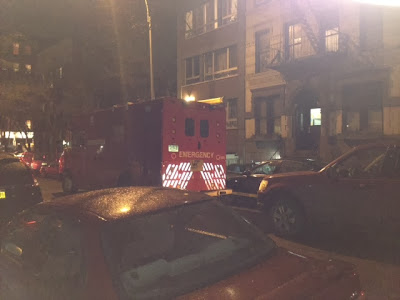 After the NYPD put in a call, an emergency Con Ed crew arrived on the scene yesterday afternoon around 4. The emergency crew blocked the sidewalk with more cones and tape to prevent pedestrians from entering the area. As of last night around 8, the crew was awaiting for a tow truck to remove the car sitting on the live wires.

Updated:
Con Ed reported that crews have fixed the stray-voltage problems on East Second and East Seventh streets.
Posted by Grieve at 5:20 AM

Someone should call the news outlets. Humiliate these asshats as they deserve.

What's it going to take for ConEd to get their shit together? Another Jodie Lane incident? Jesus fucking Christ!!

@Zach is right. Just one block over from where Jodie Lane was killed by stray voltage. Con Ed sure has a short memory

seems like there should be some sort of law suit here

"this car, surrounded by a couple cones and caution tape (no signage provided) is sitting over live wires. "

Live wires from where??

Anonymous: I'm not an electrician, but I was on the scene. The ConEd subcontractor said the live wires were at a manhole located under the car.

The area where dogs were shocked was a few doors down; at this area the pavement was dry, I imagine dried by the heat of the current flowing beneath it, when all the surrounding pavement was wet...

After all the people they have killed and maimed in manhole explosions, steam pipe explosions and stray electricity mishaps, ConEd should officially change their name to ConDead in order to clear up any confusion.

It seems to me that, once again, a timely item on this here blog helped to move things along as to the righting of wrongs.
Way to be on top of the situation EVG.

There is also currently a gas leak somewhere underground near 6th street and avenue A and has been since at least last Friday , when I called in to report the smell of gas in the lobby and stairwell of my building. At the time I asked if any of us needed to evacuate and was told nonchalantly that "we have it under control" but that they would have to dig up the street to find the source of the leak (the smell was coming into our building through the basement). There is no longer a gas smell in my building, but I did see a con ed workman leaving the building today as I was coming in. He said they still haven't found the source of the leak and it may take awhile. In the meantime, they are going into buildings in the area periodically to check and measure gas levels. He was actually very nice, but I don't love knowing there's a gas leak underground near my building and they haven't been able to locate it for 3 1/2 days at this point.

THE STORY GETS WORST: Do you see that photo in EV Grieve with a wide open path down the center of the sidewalk? That's how Con Ed's contractors secured the area and left it that way from Thursday, 12/19 thru Sunday, 12/22 while neighbors continued to get shocked and complaints continued to be logged into 911. One neighbor called this nothing short of "criminal negligence." Police who arrived on the scene Sunday afternoon later confirmed the voltage was live for more than 4 days after the first complaint on Thursday -- and that the voltage was live across the entire width of the sidewalk that Con Ed failed to secure

I just got off the phone with Con Ed... they said the situations on both streets have now been corrected, but I am dismayed at how long this took... East 7th Street stayed live for 4 days, with no caution signs even though there were calls made to report this as an emergency... FOUR DAYS... the emergency phone rep did not have any idea that someone in our neighborhood died in this exact type of situation and his voice did not even waver when I told him... he said "I apologize that someone died, but let me see if I can reach the emergency crew... can I put you on hold for a few moments". It was as though he was apologizing for a mere inconvenience... Does anyone have news of Maybelline? Did she survive? God I hope so...

My dogs were shocked in front of 239 East 7th St on the morning of Wednesday December 18th.