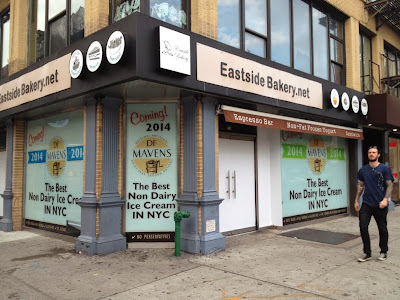 As we first reported back on Oct. 17, that prime northwest corner space on Second Avenue and St. Mark's Place has a new tenant — a retail outpost of DF Mavens...

And yesterday, the DFM folks sent along the official news release about this outpost...

Situated on a prime block at the corner of Second Avenue, DF Mavens’ flagship store will open in the spring of 2014 and showcase the brand’s award-winning line of dairy-free ice creams. The store will feature a wide range of vegan snack and beverages, including a full line of baked goods, fresh juices and coffee.

“We’re very excited to open our first dedicated storefront and plant our flag in the vibrant East Village food scene,” states Malcolm Stogo, a world-renowned ice cream consultant and founder of DF Mavens. “Our new retail outpost will allow us to bring delicious, dairy-free ice cream to a greater segment of New Yorkers who want vegan-friendly dessert options in time for the warm weather.”

DF Mavens pint-sized offerings include 9 flavors that feature the highest quality ingredients and are categorized by soy-based, coconut-based or sugar-free varieties. Designed to taste as good as any cream-based formula, each flavor is handcrafted by Stogo himself, who has consulted on brands like Haagen Dazs, Stonyfield’s Frozen Yogurt and Colombo.

As you may recall, Stogo, the vegan ice cream shop on East 10th Street just west of Second Avenue, closed for business in November 2012.

Stogo opened in December 2008 at the site of the beloved A. Fontana Shoe Repair, forced out after 45 years due to a big rent hike.
Posted by Grieve at 5:00 AM

They're lucky to have Stogo (himself!) on board to guide them through selling their equipment and breaking their lease in about, say, 10 months.

I wish them luck, but if a concept as sure fire as eastside bakery dot net can't make it in this town, I honestly don't know what can.

i am excited to have more dairy free options in the neighborhood! hoping they can break the curse at this corner spot and last a while.

It's not ice cream goddamn it, am I the only one who is being driven crazy by this? It might be a million other wonderful things but ice cream it ain't. Whatever happened to semantics? They serve a purpose you know. When you try to mess with the basic meanings of everyday words such as "cream", you are messing with the very fabric of society, trying to unravel it. And what for?

This is a great addition. Happy to see this on their web site:

"A portion of DF Mavens’ profits goes to Mercy for Animals (MFA). MFA is a national organization dedicated to preventing cruelty to farmed animals and promoting compassionate food choices and policies"

I hope the resulting ice "cream" is good, of course!

In Sweden people eat ice cream before before lunch as a snake, they eat it year round including winter. New York is not in Sweden.

"When you try to mess with the basic meanings of everyday words such as "cream", you are messing with the very fabric of society, trying to unravel it. "

Didn't Prince already do that for this word?

cream: the thick white or pale yellow fatty liquid that rises to the top when milk is left to stand and that can be eaten as an accompaniment to desserts or used as a cooking ingredient.

Non-dairy ice cream is like non-radioactive nuclear fallout. Please tell us what it is and not what it isn't, i.e. ice...whatever.

DF Mavens non-dairy frozen dessert—if you will—is legitimately delicious, and I'm happy to have them coming to the neighborhood.

Of course, I still live closer to the vegan-ice-cream-stand-formerly-known-as-Lula's, and will probably remain loyal to them.

Excuse me while I don't do cartwheels about a new business catering mostly to college kids or whoever patronizes places like 16 Handles. St. Marks continues to feel like a crappy mall from McAnywhere USA