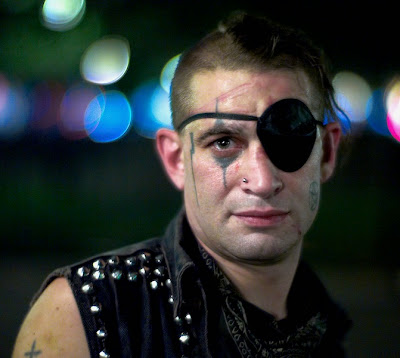 On Sept. 14, Joel Pakela, aka neighborhood fixture LES Jewels, was found unconscious on Avenue A at East Ninth Street. He died a short time later at Beth Israel. Rumors quickly circulated that he died from a drug overdose. Later, though, there were claims that he had been kicked in the head during an assault.

Today, The Villager reports on the official cause of death, according to the medical examiner's office:

According to Julie Bolcer, an M.E. spokesperson, the finding of the autopsy and toxicology investigation was that Pakela’s cause of death was “blunt injuries of head.” However, she said, “The manner of death is undetermined.”

Asked for more details — such as how many and what kind of head injuries Pakela had, and whether he got them from being assaulted or, say, falling down on the sidewalk — Bolcer said she would check. However, she subsequently called back to say she had no further information. Asked if alcohol or drugs contributed in any way to his death, Bolcer simply repeated the M.E.’s conclusion, that the cause of death was “blunt injuries of head.”

Memorials for LES Jewels in the East Village
Posted by Grieve at 12:58 PM

I used to see Jewels almost daily, on Avenue A, or St. Marks. He sure was a different person from day to day. But he always chatted with me and was friendly, and familiar, and that's what made his death hard to take. At Bob Arihood's memorial a few years ago, Jewels said "I can't believe he went before I did" and thus It was easy to dismiss Jewels recent death as an "overdose" or "expected" though I was still shocked.

When Amy Sanchez (Jewel's ex-wife) said there was physical violence against Jewels and could have been the cause of his death, I feared it would not matter. Someone just might be getting away with beating a troubled kid - whose addictions always got the better of him - to death.

Now the medical examiner has investigated and ruled. I hope the NYPD opens a case and locates the perpetrator that essentially beat him to death. Jewels did not deserve to die, and I'll always remember him during his sober period shortly after Bob Arihood died where I thought Jewels might make it and get a home. Sadly, that wasn't to be.

Jewels, the guy who would air punch you as you walked by. Someone got sick of his shit.

i remember reading the violent death bit and thinking that it was a conspiracy theory given jules's celebrity and how people are to come up with these ideas.. but yeah i agree with last commentor... on hearing this it makes sense.. it was probably some random person that he messed with.. given the frequency he messed with people in the neighborhood and the time he's been here I'm sure he got beaten up a lot.. but him dying due to blunt force is another thing.. whether he had addiction problems not everyone is forgiving of sudden antics.. RIP

I am not saying that he was not sometimes a drunk bastard... but he did not deserve to get his skull bashed in...

Seems like a lot of people know who it was...not random.

I feel bad about this, I brought the bitch here who probably did this from Los Angeles. If I could take one thing back in life it would be that, maybe Jewels would still be here. karma never sleeps though, remember that.

R.IP Joel pakela .
I love you bro and you will be missed .
They need to lock that bitch up !!

Ryan Stoner,
If you know who probably did this... Do you want to let the cops know?
If everyone knows who the "bitch from LA" is... why not let the authorities know so they can arrest him?

Ponder, she's already been cleared in the investigation, like I have been telling just about anyone who will listen, he was attacked by a group of drunks who he cursed at when they didn't give any money to him, this happened the night that he passed, Morgan kicked him once in the face almost a week before, but so many people hold grudges against Morgan, so now,a number of people want to blame her so that they feel some type of closure, and have a face they recognize as the offender, instead of coming to grips that this is a crime that will most likely never solved

Annie Sauter
On hearing of LES Jewels passing
“We are all in the gutter, but some of us are looking at the stars.” Oscar Wilde

For all my brothers and sisters, gone. From one too many, kicks to the head— For all who give as good as they get.

Let me be-
Unprotected.
Don’t put that seatbelt look
On your face, don’t tighten it down
Across your lips, your hips, no--
Don’t worry that somebody called
About my prescription, Unfulfilled.

Don’t go with me to my
Appointment. Don’t roll my
Wheelchair to the curb.

If you happen, to see my feet, bare on ice
Don’t point out the bloody patches of flesh
I’ve left behind.
And Should, my tongue cling, sharp, to frozen metal

Remember, I was the one who stuck it there.

Go
Make your run
To the liquor store.

Then, some afternoon, should
You find me, bleeding, tell me,

Ya don’ “do hospitals”, you’re
goin’ to the bar— ask me,
in your most casual of intonation, um,
“sweet thing”
D’ya got a couple’a bucks? ”

If I demand That you--Make things right?
Don’t do it. Steal my car instead. Drive it until
It dies. Then call me, to come get you.

Just sit there, by the side of the road
Get stinking drunk-drink up what ever you got
For that car, the radiator, the radio, the battery.

And-- Oh, yeah, If I ever ,let you , pull me , over The counter at work by my hair, while the sirens Scream and the police come? Let them arrest you
Make me
Come to court you-
To bail you-out, because then,

With whatever is left.
We can stop
At the liquor store

On the way home

With whatever is left, we
Can drink, and we can stink, of
Piss, dirt and patchouli,

With whatever we have left
We can fuck, on that blue tick mattress
With no blankets, and then, with

beating down a homeless man because he rattled you about some spare change... classy. i hope these drunken idiots wake up every morning for the rest of their lives and face what they have done. you took away a good friend, someone who was caring and kind, who put others before himself, loved everyone, he was like a brother to us, regardless of his problems with drugs and alcohol, he was a person, and a good person at that, and it was obvious when he was sober. there was more than just a loud drunk guy "punching the air as you pass by" or whatever was said, and HE DID NOT DESERVE THIS. rest in peace lees jewels, we will never forget you, and all youve done for us, it is a tragedy that you were take from us so soon.

Very sweet words, Crystal. Jewels is not forgotten by we who knew him, met him. Nice to see someone post here - just a reminder that he is still here touching us in some way. World isn't the same when we lose a member of the tribe...

Justice is lost to us. The downtrodden. The outcasts. The fallen.

No it was not. It was a person who had a hobby of beating and bullying anyone they thought they could, the small, the intoxicated, the frightened. This person had hurt Jewels on more than one occasion. You really should not speak of things you do not know anything about. People like you are a huge part of the problem.

I knew Jewels way before his homeless days. Yes, he was always a nut, but a good person. Whoever did this to him should be thankful I wasn't there. The times we used to have at the Limelight. RIP brother, Veighlyn aka Dally Diamond, a name jewels gave me many years ago.