[Updated] Want to buy a dorm?

Was talking with an EVG friend the other day. The conversation turned to St. Mark's Bookshop and its likely move.

And my friend casually mentioned the building owned by Cooper Union that houses the Bookshop as well as other businesses, not to mention a dorm, is for sale.

Turns out that there is a listing (PDF) for the building… 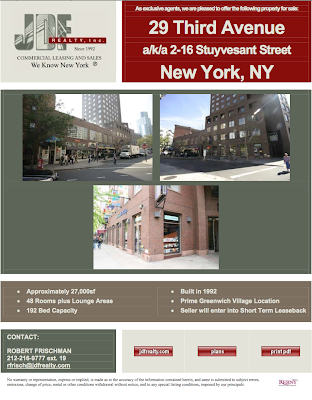 Anyway, it's not a secret that Cooper Union is facing financial problems due to increasing operation costs and declining investment income, among other things.

The Student Residence here opened in September 1992 at Stuyvesant Street and Third Avenue. Here are details about the dorm via the Cooper Union website:

The Student Residence offers apartment-style housing for 178 students. Units range in size to accommodate from three to five people, with the majority of the apartments being two bedroom units shared by four people. Each unit contains a bathroom, common living area, and kitchenette. The building amenities include a study room, laundry room, the Residence Hall Office, and the Menschel Room.

As the flyer indicates, "the seller will enter into short term leaseback." Meanwhile, Cooper Union is one of the schools reportedly leasing space in developer Gregg Singer's dream dorm project at the former P.S. 64 and CHARAS/El Bohio community center on East Ninth Street.

Updated 6:02 pm
Robert Frischman, executive vice president, retail brokerage, at the EVO Real Estate Group, said that the building is not for sale. No word on how or why the listing appeared on Property Shark in the first place.
Posted by Grieve at 5:00 AM

Could Marymount have purchased that dorm? Hmmmm....

Maybe if they hadn't torn down the 1912 Hewitt Building to build that craptastic piece of "green" dreck they wouldn't be in such dire financial straits. No sympathy, especially not after they foisted 51 Astor Place on us.

Wait a sec'...back in the 80's, they tore down a great hardware store, the futon shop, the previous location of Sharaku, and the jazz section of Smash Records to put up a dorm for what I had mostly considered a school of relatively local people (all the Cooper people I knew were of similar backgrounds to all the City College people I knew, and many lived w/ family). Now, they're gonna sell that?

They've made some terrible, terrible financial decisions, not least how they 'manage' the land under the Chrysler Building and how they built a crazy building that went waaaaay over budget.

...they want a short-term leaseback? Wow.

Cooper Union was unable to maintain it's free tuition (a main point of it's founder's original mission) because the trustees had no financial wits, and instead simply sold off property when they needed money, instead of finding more sensible, stable financing. THEY'RE STILL DOING IT?

That's what Cooper Union gets for replacing two buildings (one perfectly fine, the other admittedly ugly and bland) with two alienating starchitect monstrosities from design hell.

I used to live across the street from the dorms, before they were dorms. It was an open lot and there were always prostitutes walking up and down that particular block. When they put the dorms up the whole energy of the East Village started to change. It marked a very large shift in the consciousness of the place. We had to clean up for the kids.

Was JDF Realty authorized to market the property????