CB3 requests that the incoming de Blasio administration return P.S. 64 to the community 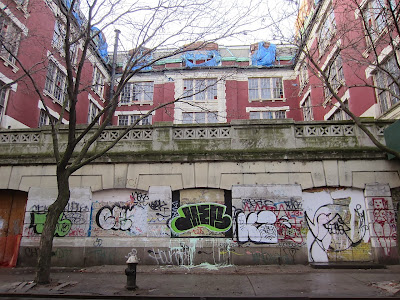 There hasn't been much activity (aside from a pop-up art show) to note at the former PS 64 and CHARAS/El Bohio community center on East Ninth Street.

For a really long time, developer Gregg Singer has been trying to turn the property into a dorm. Per previous reports, both The Joffrey Ballet School and Cooper Union have signed on to house its students here.

Meanwhile, some news to catch up on … back on Dec. 17, Community Board 3 passed a resolution requesting that the incoming de Blasio administration return the building to the community. (This was first reported by Off the Grid, the blog of the Greenwich Village Society for Historical Preservation.)

The resolution reads, in part:

Whereas, in 2004, the owner filed plans to demolish the building to construct a 20-story dormitory, “University House,” though the owner had no accredited educational institution participation; and

Whereas, after a concerted community effort, the NYC Department of Buildings denied the demolition permit, based on Rule 51-01 that governs the Classification of Student Dormitories, requiring submission of a full lease by an accredited educational institution for a minimum of 10 years, and a restrictive declaration that the building would only be used as a dormitory; and

Whereas, in an unprecedented community campaign, in 2006, the NYC Landmarks Preservation Commission designated the Former P.S. 64 school building as a landmark, recognizing both its physical, cultural and historical distinction; and

Whereas, after the landmark designation, the owner removed the building’s cornices and dormers, as well as removed the architectural detail at the roof line, leaving the building open to the elements; and

Whereas, the owner has allowed the building to fall into extreme disrepair; and

Whereas, the DOB has issued over 42 violations since 2008, including the failure to maintain the premises; and

Whereas, the owner currently owes the City of New York approximately $30,000 in unpaid penalties for ECB violations; and

Whereas, in 2012, again the owner filed to convert the building to a dormitory; and

Whereas, the owner’s current application for dormitory use does not meet the NYC Department of Buildings’ criteria for a dormitory under Rule 51-01, as there is no lease for the entirety of the facility with one or more accredited educational institution for a minimum of 10 years, nor is there a restrictive declaration that the building will be used exclusively as a dormitory; and

Whereas, it has been 14 years since the auction sale and the owner has been unable to comply with the conditions of sale to develop a community facility; and

Whereas, since the sale and privatization of 605 East 9th Street, the community has faced displacement of vital community services, community organizations and community space; and

Whereas, the building has not been properly maintained by the current owner and has become a threat to public safety due to, among other things, a lack of proper snow and ice removal and a failure to consistently maintain construction scaffolding; so

Therefore, be it known that Community Board 3 requests that the new mayoral administration return the former P.S. 64 school building to the community by legally retrieving and then selling or giving it to a well-established not-for-profit organization(s) with a long history of serving the people of the Lower East Side/East Village including, but not limited to restoring the not-for-profit organization known as CHARAS / El Bohio to the building located at 605 East 9th Street.

Off the Grid also pointed out that there is now (as of the fall) an active website for Singer's dorm — University House, which will be ready for the 2015-16 school year. Meanwhile, the city disapproved the plan for the dorm conversion last April 1. (According to DOB documents, the cost of the project is $16 million.)

Perhaps 2014 will finally be the year that something happens with the circa-1906 building.

Read Karen Loew's post at Off the Grid here for reaction from local activists. 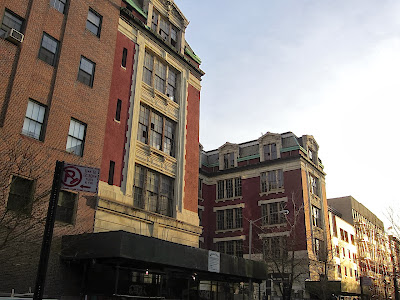 The Landmarks Preservation Commission approves application for modifications at PS 64
Posted by Grieve at 5:20 AM

Hopefully this will be the year something happens but I do not support givig it to Charas. They're a good cause but if they had paid their bills to begin with then they wouldn't have lost the building. Why would this time be different ?

Gregg Singer's stated strategy is to wait everyone out. He figures that given enough time, the opposition (hostile council members, neighbors, activists, etc) will have moved on and he will then be able to do as he pleases with the property, which, perversely, INCREASES in value the longer it sits there rotting away.

He never should have gotten the sweetheart deal that Giuliani gave him, whereby the purchase was financed by the city and he was given a money back guarantee. This is UNHEARD of when the city unloads properties to get them back on the tax rolls!! Singer had nothing to lose with this deal, which can and SHOULD be negated by the DeBlasio administration.

There's a lot of hope in DeBlasio, but keep in mind that he took A LOT of money from real estate interests (see the latest issue of The SHADOW) though he had NO competition in the mayoral race and therefore did not need to -- they will expect a RETURN on their investment and they usually get it.

CB3's resolution sounds nice, but only the mayor can undo this deal....

The horse carriage industry gave money to deblasio too, yet out if the gate he is going hard to end the practice. As he said he would.

Campaign contributions give you a seat at the table, not necessarily the table.