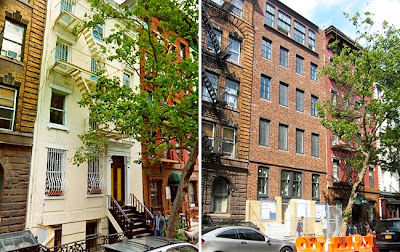 All the big ones are there — from Willets Point to the Domino Sugar Factory to 5Pointz.

And cracking the list at No. 10 — our very own David Schwimmer, who, perhaps one day, may actually move into 331 E. Sixth St.

David Schwimmer’s Townhouse, East Village
This spring the scaffolding finally came down from around actor David Schwimmer’s East Village townhouse, which has outraged nearby residents for years. In 2011 he demolished the original structure, built in 1852 and considered the oldest townhouse on the block, before it could receive landmark status in 2012. What followed was years of construction, falling debris and angry notes from neighbors, include the graffiti, “Ross is not cool” scrawled on nearby plywood in August as a welcome note to the Friends actor, who played Ross on the hit show. The result: a totally bland brick facade on a six-story mansion with a rooftop terrace.

Here is David Schwimmer's East Village home
Posted by Grieve at 5:20 AM

Someone is in there getting massages- I've seen a blond woman walking out of there carrying a portable massage table. BTW, when is that butt-ugly construction fence coming down? Jeez...