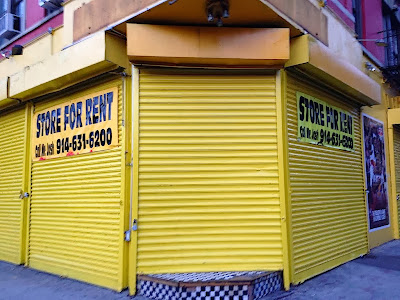 Alex Stupak, who runs the well-regarded Empellón Cocina and Empellón Taqueria, plans to open his third restaurant at 132 St. Mark's Place at Avenue A, where the Sushi Lounge closed at the end of October.

On Monday night, CB3's SLA committee granted him a liquor license for the space.

Okay! I have a liquor license at 132 St. Marks now. I guess I'd better build a restaurant now.

Stupak told Eater on Dec. 23 that he hasn't decided on the concept for the space just yet.

Ahead of the meeting, some neighbors had concerns about another full liquor license and a 2 a.m. closing time in an area already saturated with liquor licenses. 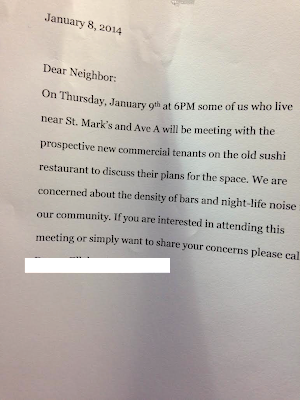 However, as we understand it, there was still some opposition to another liquor license. One EVG confidant at the meeting said that there were CB3 stipulations that the restaurant will only serve mescal, not a complete bar; that the initial operating hours would be restricted, subject to later expansion. (The proposed hours were 11 a.m. to 2 a.m. daily. We didn't hear what the agreed-upon new hours will be.)

Regardless, there was a lot of enthusiastic support for Stupak — including from a sitting member of the CB3/SLA committee.

As the for rent signs turn on Avenue A

Here are a few scant details about chef Alex Stupak's new venture on St. Mark's Place
Posted by Grieve at 5:00 AM

I don't know if anyone remembers when this space was "Alcatraz;" there was a coalition headed by a resident of that block named Ron Plotkin [since deceased; he wrote famously, "When did they turn this street into a strip?"] Seems that after Alcatraz closed, the owner of the Raccoon Lodge in Tribeca wanted to open a dive on this spot called "Mutha's Roadhouse."

Well, the coalition was successful in keeping "Mutha's" out, and that's why we had the Sushi Lounge for these past several years. I wish this coalition well.