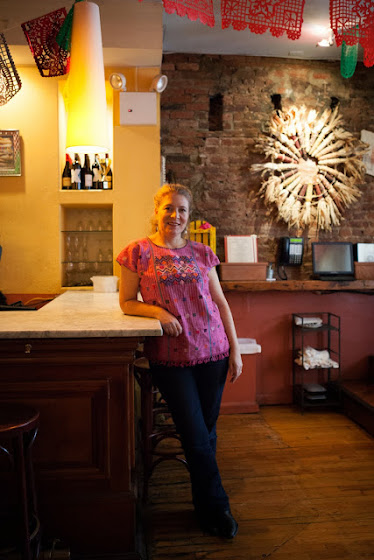 I’m from Mexico City. My dad was an engineer from New York and my parents moved to Mexico for a project, but when it finished they decided to stay. I had never really traveled to New York as a kid, but I came to go to school when I was 17 and ended up staying. After I got here, I first realized I could live here when I went into the subway and everything was in both Spanish and English. I realized I could be at home. And once you come to New York it’s hard to leave. I always thought I would go back but I never did.

I never thought I would end up having a career in the restaurant business even though I always cooked. I studied anthropology and I’ve always been fascinated with how cultures come together in their food. I started working as a dishwasher while I went to college at Barnard and my sister was at NYU and living at 13 St. Mark's Place. Then I got a job as a waitress at this place called Bandito on Second Avenue between 9th and 10th, around 1984.

For me, with a restaurant you almost have a front row seat to the neighborhood. You see your community and you know the people. You are part of the surroundings in such a tangible way. Even though there is so much change in the neighborhood there is also so much continuity. In the restaurant business I like to say that you get a lot of people who are going through their life sideways and so you have a chance of helping other people fulfill their dreams. We’ve helped a lot of people get through school and they come back and say, ‘Thank God you got me off the streets back then.’

At that time, the staff and the customers in the East Village restaurants were an incredibly talented pool of people. It was very artsy. They were crazy days. There were so many artists and all the galleries were just booming. There were a lot of performance artists. And then you had a lot of actors living here. It was very vibrant. There were a lot of people who had been in squats. People were starting to homestead a little bit. The community gardens were literally cleaned by hand by the people from the squats.

I was waitressing at Bandito until they needed a manager and I said OK and gave them a six-month commitment. It was this little Mexican restaurant, which was not very authentic. That’s where I really started to cook. I would cook behind the scenes, backstage for me and the guys. For one thing, I could go back and forth to Mexico and bring things back. The menu itself was great but the restaurant wasn’t owned by a Mexican. It was owned by a Czech guy from Slovakia named Rudy Mosny, who was friends with Abe Lebewohl from the 2nd Avenue Deli. Abe gave him the idea to do the Mexican place.

Abe was an amazing guy. I used to laugh when he would come over to eat something that wasn’t kosher and he had a knack for popping in anytime I would be cooking Mexican food. I’d be making a big pot of Chilaquiles for the guys in the kitchen and without fail he’d show up. If you’d ever go out to dinner with him and he liked what was on your plate, he’d help himself.

I ended up helping [Rudy] open a restaurant in the West Village ... and they opened a restaurant called Telephone Bar and Grill. I was about to start graduate school and Rudy decided to move when the Berlin Wall went down. He had a chance to go back and reclaim some of the land that had been taken from his family, so he said to me, if you don’t stay and manage I’ll close Telephone, and I couldn’t do that. So I turned around and ended up running it on my own until I opened La Palapa. I realized that I loved my day-to-day life and so it became my career.

I opened La Palapa with a partner 14 years ago. It’s really what I’m homesick for; it’s recipes from my childhood. It’s great because I get to break the stereotypes that people have about Mexico and Mexican cooking. People expect it to be big, cheesy nachos, the salsa and chips. That’s not what you eat in Mexico. Unless someone gives me an incredible tortilla I don’t put a burrito on the menu, because if I did that people would not try the authentic stuff. If I opened today everyone would be like, ‘oh, it’s artisanal’ because we make our own cheese and we make everything from scratch. But I had to do that because you could not get it. And these days I can be even more creative than when I started.

I’ve also been helping and consulting with Robert Ehrlich, who bought the building I live in and the Holiday Cocktail Lounge, which has been a crazy thing. I was in the building and I said, ‘I’m here and I’ve got La Palapa, give me a call if you need help.’ It’s been a constant construction zone. The building was in terrible condition. Next week will be two years since he bought the building. It’s been such an exercise in zen and archaeology. As much as we’ve been trying to maintain it, you couldn’t keep everything. We were lucky on their closing night that we didn’t all fall through. Every time we look behind a wall it’s been a major repair. It’s been an endless process.

Taking down the paneling, there were doors going everywhere. There were old murals from when it was a burlesque house called Ali Baba. There were showers downstairs for the girls. It was a beauty parlor. I’ve got everything in a shed in the back. We found a tunnel that goes across the street to Theatre 80. I did a lot of research when doing all the permits and the space was TL50, Tavern and Liquor 50, the 50th liquor license after prohibition. And most of those were all crooked. And there was a bootlegging tunnel to First Avenue under Theatre 80. The buildings on First Avenue are all a bit cockeyed because of that tunnel.

There’s still a little bit of renovation. At this point I don’t know exactly how it will all end up. It’s remarkable, that any day if you were just camping on the stoop, 10 people would come by and have a memory about the Holiday Cocktail Lounge.

I loved Bandito! Went there on 9/11 to down margaritas and process what I just saw from my roof in soho. I still have a cup filled with the little plastic animals they used to hang on the rims of the glasses.

bootlegging tunnel? is that accessible to the public in any way? sounds awesome

Another story which helps explain why New York is New York, it attracts the best people in the world like a magnet. Thanks again for another great profile.

Go talk to the good people at William Baranacle Tavern! They'll tell you all about it!

thanks - also fascinating that she found remnants from the beauty parlor and burlesque house. Would love to learn more about Ali Baba.

Thank you for this. Amazing snapshot!

What a great piece - love Palapa even more knowing the backstory and the history of the ever changing East Village. Thank you James Maher & EV Grieve!

This makes me want to go there. Great piece, I like this woman.

Wonderful story! I've only had drinks at La Palapa ages ago, will definitely seek out Barbara's cuisine soon!

Love the food at LaPalapa. They were great during Sandy. And save room for desert... their home made ice cream is second to none! Try the rose petal or harvest corn... amazing!

I hope that they save all that was uncovered in Holiday and make that the new concept. I'd love to go to a place with the murals, doors/openings and showers of Ali Baba. Everything old could be new again... and fantastic! Even the name.

They were fantastic during Sandy, it was the most amazing buffet! We love La Palapa and Miss Kita the Wonder Dog of East 10th Street does too! Barbara, Judy and the gang are such a vital part of the community. xo,

Loved this one, it's one of the best restaurants on St. Mark's and I'll definitely be going there for a meal on my next visit!

i loved this profile! one of my favorites. thank you so much for sharing. felt like such an authentic and real person behind a business that i admit i have not visited in a long time, makes me want to go! loved her story and her knowledge of the hood.

I saw a show called Single Wet Female several years ago at P.S. 122 featuring Marga Gomez and Carmelita Tropicana, and they both gave a plug to La Palapa.

Thank you for this profile.