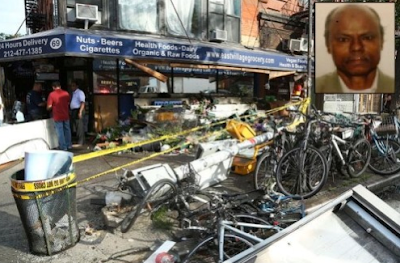 Akkas Ali, the florist at East Village Farm and Grocery who was critically injured last June after an out-of-control driver jumped the curb, has died.

Last night, before a Community Board 3 meeting, board member Chad Marlow, who was instrumental in raising money for Ali's family, shared the sad news, as BoweryBoogie reports.

"He died of complications stemming from his injuries from the car crash," Marlow said at the meeting. According to DNAinfo, Marlow did not know the official cause of death or whether Ali died at home or in the hospital.

Just before 7 a.m. on June 19, Shaun Martin of Queens and a female passenger were reportedly speeding down Second Avenue when he lost control of his Nissan Altima ... jumping the curb around East Fourth Street and injuring four people, most critically the 62-year-old Ali. He reportedly emerged from a coma 11 days after the crash.

Martin is due back in court on Tuesday. Per Gothamist: "A spokeswoman for the DA's office says that any additional charges filed against Martin due to Ali's death would be announced in court on the 21st."

Serena Solomon at DNAinfo has more information about Ali's death. He died on Jan. 1. His death has been labeled an accident by the medical examiner.

He went into cardiac arrest when a tracheostomy tube that he needed to help him breathe because of his injuries became lodged in his throat, the medical examiner's office said ...

The medical examiner's report concluded that the mishap with the tracheostomy tube occurred "during the management of blunt impact injuries" caused by the crash.

Report: Injured East Village Farm and Grocery florist has lost his memory, use of his voice
Posted by Grieve at 6:32 AM

Tragic. Will the charges be raised to now include manslaughter?

Oh my God, how tragic. My sincere condolences to the Ali family, and Akkas, may you rest in peace now.

so sad and senseless. his poor family

My condolences to Ali's family and friends, and compliments to the community for rallying to help him.

Now it's time for DA Cy Vance to throw the book at the driver. Just because Ali survived a few months doesn't mean the driver isn't responsible for this tragedy.

None of the reporting makes clear if his death was related to being hit by a car or not...

Heartbreaking. Now this lowlife Shaun Martin needs to be convicted of murder.

I updated the story with a little more information.

I am so sorry to hear this sad news. My condolences to Mr Ali's family and friends.

Thanks, Grieve, vance's office had better up the charges to at least manslaughter...

Stories like what happened to this man and in turn his family should remind us how fragile life is and how tragedy came come in a flash.

His death was not caused by the crash... wonder if this will affect the new charges...

So sorry and sad to hear, my condolences to Ali's family and friends.

The piece-of-shit who caused this murder was arrested in December carrying cocaine and threatening another man's life. HOW AND WHY IS THIS POSSIBLE?
This piece-of-shit is a MENACE to everyone around him. WHAT IS GOING ON HERE?

its a very tragic situation however i feel sympathy for the driver as well as he must be traumatized emotionally as well as the victims here.the person who was driving the car obviously seems like he has some mental problems or addiction diseases but i dont think the person woke up that day with any intensions of hurting anyone...idk.my prayers go out for both partys...

Ali was a sweet guy. Years back, when I would pass him outside the grocery between midnight and 4am, he would cut up a mango for me whenever I asked him.

At first he would tell me that he couldn't do it and then after a few seconds, he would agree to do it. This happened every time.

Was thinking today that this will be the first Valentine's Day in a long time without Mr. Ali staging the flower stand at the deli.

What he did was wrong. The man had a family and seemed like a nice person with a good heart and its a tragedy this happened to him. However, he was not murdered. The driver had no intention at all whatsoever in causing anyone harm when he woke up in the morning. Drugs impared him especially pcp. If he hurt anyone it was himself, unfortunately in this case hurting himself harmed others. That 2nd arrest about him allegidly making threats to take another man's life.....well he was 170lbs at the time and the poor man be "threatened was a 300lb gang member club bouncer who threatened 1/2 the lives of the people who were in the club that night and every other night. He li ed just to watch the driver "really face jail time, just to watch "the white boy burn", or so stated by him on a later date.