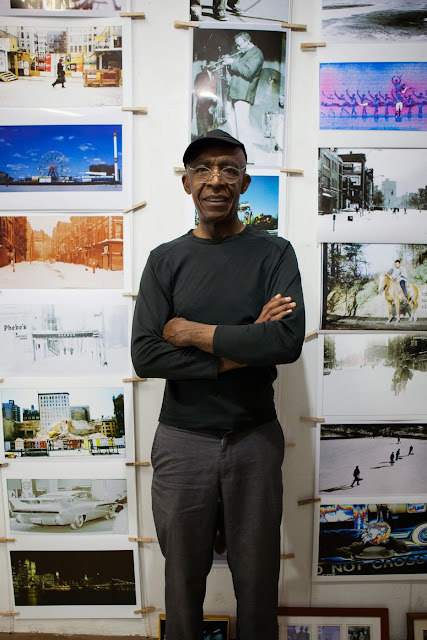 I was born in 1938 in South Carolina. I was born as an illegitimate child within a family that was very conservative. Forgiven but not quite. The connection was never really made between my mother and my father. They came together under this affair and out came me. By that point my mother had abandoned me and my grandparents were basically bringing me up on a farm. In the kind of environment I grew up in you had to grow up fast. Back then it was pure survival. Corporal punishment was a natural thing. Where I was born it was this isolated place out in the middle of nowhere. There was a dirt road leading back there and that was about the extent. There were no telephones and no electric lines.

I had all kinds of duties. As a kid I was put to the task of picking cotton, cutting cane — the whole nine yards, without really understanding that most kids don’t do this. It was completely normal for me. I did not get the chance to know that this ain’t the way it’s supposed to be. I had to be self-contained in terms of being very confident with myself and being able to deal with the outside reality. There were parts of me that I had to keep sacred, mainly the way I thought. I simply could not express how I felt. I was not allowed to do that. I learned how to keep that compartmentalized.

Eventually, I began to understand the reality that I was living in and the conditions that were imposed upon me. I was in a worse position than a slave. I had no rights, absolutely no rights, and I was being abused. I decided this was it. Somebody beats you all of the time and you get to the point where it’s enough and you start figuring out how are you going to deal with this. You’re not an animal.

But then, another part of you comes out. That other part of you is the beast. I learned about that. The beast is an awesome, awesome thing. I began to realize that there was a beast in me and all I had to do is to call on it and I became strong. There was no pain. It all became hate. I guess they felt it because I no longer screamed, I no longer cried, I just took it. There was no satisfaction by the person who was abusing me. They’d try harder. Okay, cut the skin, it hurts, now I have to learn how to deal with that. This is when I was 9 years old. I learned a lot, I understood a lot, and I studied these folks. I had to know them. They saw who I was becoming and I guess they had to make a choice. They had to either call my mother to come pick me up, put me in reform school, or find a hole and knock me in the head real hard.

So my mother came and took me to New York. I had to learn everything all over again but I had that ordeal behind me. I lived in the Bronx. The Bronx was like it is today if you skipped the ‘80s. There were empty lots leftover from buildings that used to be there. The top was gone and you’d see the bricks where the basement was. No floors. They were like ruins. We used to play in all those different places. It was weird. It was like Halloween all the time depending on where your imagination was. We played 24/7, into the night. At 11 at night we’d still be playing. Most of the time there were 8 or 10 of us around but there was always somebody there. I was never quite alone. Our neighborhood was protected when I grew up because we were this group of kids there. And by the sixth grade I had finally got into women and I had a girlfriend. She ran off with this guy, Norman Butler. I will always remember Norman Butler, just what he looked like. Norman Butler was one of the people who murdered Malcolm X.

I used to work as a delivery boy delivering groceries and doing all different types of things to support myself. That was when I realized there was an economy in this town. How do you survive? Nobody’s told you really what to do or how to do it. You have to learn the ropes. By 1951, I was beginning to understand that the whole educational system simply was not compatible with the way I thought. So I went to the library and read quite a bit on my own.

I came out of school in ’58 and by ‘59 I had latched on to this photography thing. Somebody asked if I wanted a camera for $15. Something said I ain’t supposed to say no. It was not really in my interests back then. I was seriously into bicycling at the time. Then everything turned around in ’59 when I got a job working at the District Attorney’s office. I got that job underneath the wire. I became the photographer for the District Attorney’s office. Can you imagine? Within six months, I had taken over the photography department. I had found a level of legitimacy now. It kept these doors open. I kept wanting to do something else but the doors kept opening. Early on, I was forced to be responsible for myself and when it got around to it, I was always a very responsible person.

I got married, the assistant District Attorneys are coming to visit me, coming to my house. I was living off of Central Park West on 84th Street in a nice brownstone. Everything was perfect. I was 20. I was responsible, people were recognizing me, wanting to be associated with me because of what I knew, and then I got a letter saying, ‘Greetings…’

I realized this is what life had prepared me for. They had drafted me into service. That whole disciplinary that I had to deal with, I now had to do it all over again. I had to succumb to the system. I was forced to be a soldier and I had to confirm to that or otherwise I was going to have a lot of issues.

I got shipped down to South Carolina, through South Carolina all the way to Alabama, in 1962. Can you imagine? I was born, not there, but I knew about there. I grew up in the middle of all of that. I had to learn a whole level of discipline. I showed up the wrong way when I was being trained. They taught me how to deal with chemical, radiological and biological warfare, but what I learned was psychological warfare. I wasn’t interested in continuing in that area. It was the worst. Here I was, in the midst of these huge tanks filled with the worst. If anything happened to those tanks, if they busted? It was scary. But I had to put that behind me, just like I had done with all those other folks and continue with my journey.

I did three years in the Army. I learned a lot from the Army and they learned a lot from me. Let’s put it that way. When I got out of that and back to New York, I said, ‘Now what?’ 1964 was the beginning of my life. I got involved in meeting interesting people and all these things began to happen. I decided I needed to go deeper into this realm called photography. My mind opened up and I began to explore. I was working as a freelance photographer. I went to the World’s Fair, I met John Coltrane in 1964, and covered all of that stuff. I was doing all types of street work. I was out there. I was a freelancer, going wherever I needed to go.

I settled down in Brooklyn, figured out that was a bad place to live, got divorced and moved to the East Village, around ’65. I got a motorcycle and I had parties continuously, living on 11th Street and Avenue A. I was in this haze. It’s now a very important historical place — 501 E. 11th St. Every place I’ve lived in they’ve destroyed.

We will have Part 2 with Alex Harsley next week.
Posted by Grieve at 6:45 AM

Great stuff. The best yet!

He oughta write a book!

Fascinating man and story, I'm sure there is a lot more he can tell us and teach us.

"I settled down in Brooklyn, figured out that was a bad place to live, got divorced and moved to the East Village"

words to live by

Can't believe I'm the first to mention his owl and penguin chauffeurs. The most photographed and Iphoned critters on e4th st.

He'll talk about the car in Part 2 next week!

Wow! That was awesome. My favorite yet.

I'm not surprised he has been biking since the 50s.

@xootrman - thanks for that, I've been wondering about Penguin and Owl!

Wonderful! The best so far!

I am a professional, working-photographer myself, and have lived around the corner for over 30 years. I have seen him inside his shop for decades, and I have always been intrigued by him, but never dared go in to talk to him. I figured he was unapproachable, and too busy trying to make a living out of this storefront, to talk to someone like me, who was just interested in talking photography. This interview shows me how wrong I have been, and how enriching for me, and perhaps for him, it would have been had I walked in there in 1989 or so, when he was offering darkroom rentals, and I was looking for just that.

I am So excited to read part 2.

Alex is one of America's greatest "undiscovered" photographers and a neighborhood treasure.Do yourself a favor and go visit his gallery on 4th Street.

ABsolutely engaging!!!
My favorite "Out and About…" EVER.

i make it a point a walk by there every few weeks, just to see what's new. he has a great eye!