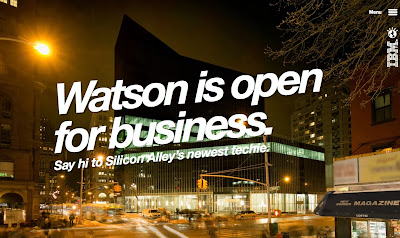 There are multiple reports this morning that IBM is making Watson, that smart AI computer system who kicked some "Jeopardy" ass a few years back, the centerpiece in the company's new $1 billion business unit.

And why should you care? Let's go to Forbes to tell the story!

IBM says it plans to spend over $1 billion on the new unit, which already includes over 2,000 employees, in the next several years, out of the new 51 Astor Place. Mike Rhodin will head up the group, which the company hopes will help it reach a $20 billion revenue projection for its big data and analytics services by 2015.

The announcement of the new unit and its headquarters in ‘Silicon Alley’ is for a simple reason: to find some positive momentum for IBM within CEO Ginni Rometty’s 2015 roadmap, while showing techies in New York that IBM can be cool, the company hopes.

Perhaps 51 Astor Place developer Edward Minskoff will have the joint fully leased by the end of this month after all.

And say — do artificially intelligent computer systems like tuna melts?

.@evgrieve Wait...what? I thought @KenJennings was moving in. This is completely different.

I B Mostly leased.

Hmmm, the "Deathstar" tag is all the more appropriate!

Ha ha, THAT's how IBM intends to show the tech world that it's *cool*? By moving into the Death Star?

That's interesting news, more interested in what happens to the retail though...

IBM also stands for Intense Bowel Movement, which is what it used to feel like when using their machines. Here are a few other things IBM stands for:

Moving into a hideous building that's incongruous to its surroundings, smack dab in the middle of a neighborhood that's had a failed re-branding as "Midtown South" sounds like an excellent way for IBM to reset the narrative on their momentum!

Tell me when Subway - Eat Fresh! moves in.

Concerns about this move go beyond NYC.....
Technocrats takin' over, kiddies.....combine IBM's Watson move here with recent bombastic-totalitarian push on the "Internet Of Things" BigBrotherConnectivity at CES......with "thought-controlled" computers/screens....selling it to us as "convenient" and/or "cool"......

Is there where IBM will build the doppelgänger automatons that will replace the longtime EV residents who will be served as fro-yo at Soylent Green™ in the Death Star's retail space?

I welcome our robot overlord, er...wait.

can Watson remove all the fro-yo shops and bring back Viva and 7A?

Hey, that website's time-lapse video must have been done a week ago when there was the post on the filming of 51 Astor Place! I think the vantage point of the cameras is exactly where the pictures of those lifts were.

Yes! I was thinking that too... I didn't have a chance to poke around that site too much just yet...

how long until Watson creates Skynet? And until Skynet starts to learn at a geometric rate?

Deathstar building may turn out to be too aptly named...

watson is the future - it will turn us into good little lemmings. doctors will no longer diagnose, they will turn to watson.
life will be a series of recipies - everything will be a logarithm.
thinking will be discouraged.
1984 has come and gone.
watson is here.

> other things IBM stands for:

the original one is 'itsy bitsy machines'.