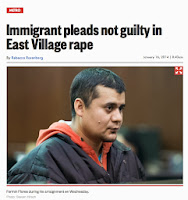 The man accused of raping a 22-year-old East Seventh Street resident early Monday morning has pleaded not guilty this morning, the Post reports.

According to the Post, the police arrested Flores at San Loco in North Williamsburg where he works as a cashier. He lives in Washington Heights with his girlfriend and has no priors, his lawyer said.

Oh man, That guy used to work the counter at the 2nd ave location.

The line in the story about neighbors reporting hearing screams is distressing. If they heard screams, why didn't they run out of their apartments to find out what was going on? I know if I screamed in the hallway of my building, my neighbors would be down there in seconds. We look out for each other.

I don't know if I can order from San Loco anymore, this is crazy. Glad they caught him, 7th Street used to be my safe street to walk down. Time to get the pepper spray ready.

Haven't seen it revealed anywhere if he's an illegal "immigrant."

Why wouldn't you order from San Loco anymore? It's as if you're inferring that San Loco's hiring manager knew the guy had rapist, violent tendencies and happily brought him on board. Gimme a break.

Anon 11:45 AM - I have some new neighbors and when they woke me up (the first time) at 4 am having loud unpleasant sounding sex, I wasn't sure if I should be calling the cops or not. The only thing that informed me not to was that she was groaning in what sounded like agony but not saying stop.

The implication that the man's employer had anything to do with this is ABSURD. Maybe we should boycott North Williamsburg and Washington Heights, too? Also, OMG, he's an immigrant!! I suppose you think we should stop all immigration immediately?

Think before you pronounce someone or something guilty by association, please. San Loco is a locally owned business, not a cradle of criminal minds. (Plus which: catfish guaco locos w/hot sauce, please.)

WOAH!!! I couldn't remember how I recognized him! Then when I read that he worked at San Loco it clicked. I live on 7th and 1st and he worked at the San Loco on 2nd for YEARS. This whole situation sucks. Even though I'm not threatening a lot of times I don't follow women into our building until after the door closes and locks, just because I don't want anyone to be freaked out.

I am no liberal patsy by a long shot, but considering the longterm local employment, and the complete lack of any criminal record, doesn't this guy deserve the consideration of possible innocence ? Unless there is some sort of smoking gun evidence here that I am not aware of, like when he was caught he had the woman's property on him, and even then, sometimes things go wrong and people tell lies about the actions of others, etc. really the posters here have the noose around the neck already and unless they are privy to information I am not aware of, they have no idea whatsoever about what happened.

One recent night I (female) had an argument with a young lady who rushed in after me when I had just entered our building's front door.

She pushed the door open right before it shut so she wouldn't have to key in obviously.

I whipped around and told her she shouldn't do that, that she scared me, that I had no idea who was coming in right behind me and that that is a dangerous thing to do.

Instead of having any kind of common sense she argued that she lives there, "it's only me, you can see who it is", blah blah blah. She literally stamped her foot defiantly and with a huff when I repeated that she scared me.

She is a typical rich, sheltered, young princess (utterly clueless as to why I reacted the way I did).

You think I wanna get jumped in my lobby? Fuck no!

crazy, no priors then this? wonder if the name is right....

"She is a typical rich, sheltered, young princess (utterly clueless as to why I reacted the way I did)."

--unless you shook her down for her bank statements, and assessed her daddy-issues in a psychotherapy session in the vestibule, I think we could probably just leave it as she is clueless.

Not every *sshole in the east village is a rich princess. Sometimes they are just *ssholes

Assume innocence until PROVEN guilty. If guilty, FRY the bastard!!

I'm with anon @ 2:37. Believe it or not, but innocent people are accused of crimes all the time. So take a deep breath before you give up your favorite burritos because this guy used to work there.

I have worked with Fermin at San Loco for the past five years. I know him to be a kind, hard working, and down to earth guy. It is hard for me to wrap my head around the fact that he is being accused for this. It is even harder to believe this could be true.
He has been an employ there for over 10 years and never has done anything during that time to make anyone think twice about his character.
Everyone is in total shock. Please do not punish a locally owned business because of the possible actions of one.
The owners and other employees are as shocked and upset as all of you. I live in this neighborhood as well. I was alone with him in the store numerous times. I never felt unsafe.
It makes me question so many things. I am hoping this is a case of mistaken identity.
Oh, he is here legally. All of the employees are and some are even Mexican and American citizens. Not that his ethnicity should have anything to do with a possible crime nor should his place of employment, where he lives, and his girl friend.
Its just a really sad situation for all involved. If anything the Loco crew needs to know that we still have your support.

sallyannemarie: did he work that night? It seems like he worked at the Brooklyn location, did he sometimes cover shifts at the East Village location? Was it unusual for him to be there on a night he wasn't working?

He worked days in Brooklyn, so I am unsure why he would be at 2nd avenue that night.

I'd eat at San Loco if they had more vegan options.

Seriously, the guy's innocence or guilt shouldn't have a bearing on the quality of the food; I'm already boycotting enough places for real reasons.

Also, in this country, I think you're still innocent until proven guilty.