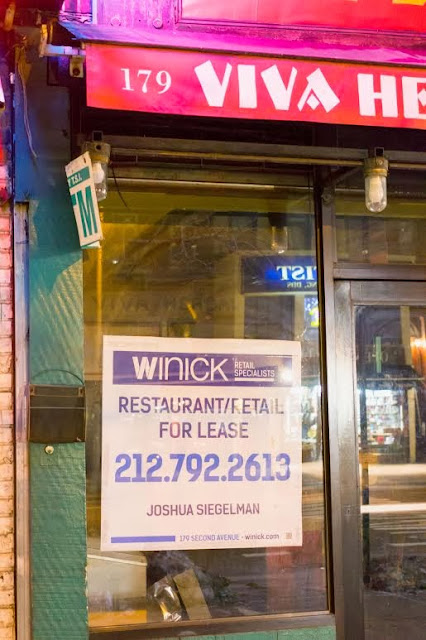 There was some thought, though, that the space might have been damaged by a leak or some bodies came bursting through the floors.

That was not the case. On Wednesday afternoon, workers cleaned out the space, bagging up paper products and pizza boxes and dumping them around the corner on East 11th Street.

Viva's #1 Customer spotted these, and was not pleased. 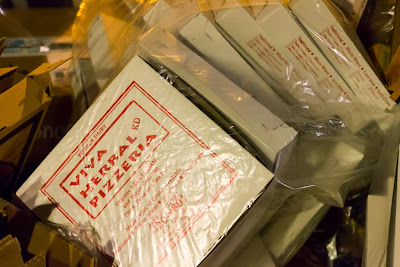 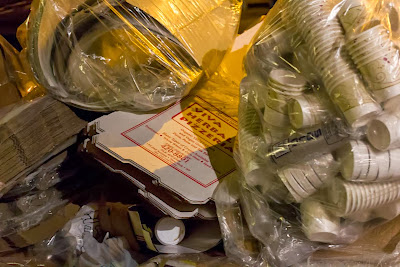 "Fitting that the movie 'All Is Lost' is playing next door at the Village East Cinema," Viva's #1 Customer told us.

Karen Loew, who works nearby at the Greenwich Village Society for Historic Preservation, also spotted the workers emptying the contents of the former pizzeria. 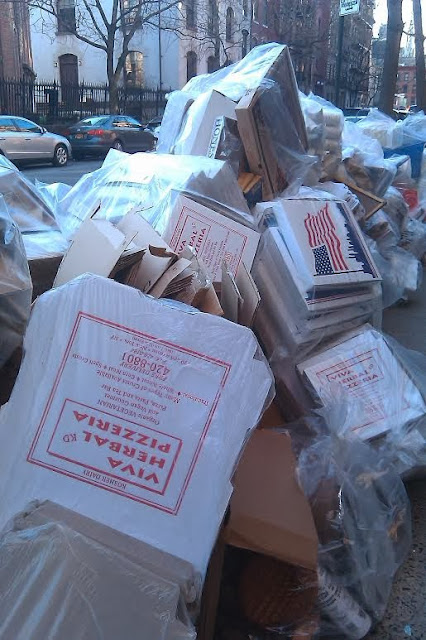 The fellows cleaning out the space, who didn't work for the former or future tenant, said they thought that another pizzeria will replace Viva (makes sense) ... and that Viva was moving to a new location (doesn't quite make sense, given that the workers trashed perfectly good supplies).

In any event, a for lease sign is now up in the former Viva window. The space had been on the market since last August.

The polar shift has begun and bodies are beginning to self-exhume. The media has been asked by officials to not report on the incidents for fear of starting a "walking dead" panic. This is why so many ground floor businesses are closing over night. The buildings were constructed on old, un marked cemeteries and the coffins are working their way up to the surface and through the floors.

Uh, bursting through the floors thank you very much.

why kick out Viva just to put another pizza place in there? makes no sense.

Anon. 7:58, since that is the case I would not want to spend much time near whatever dung heap is being planned for the old Mary Help of Christians and accompanying cemetery site. With the way those bodies are bursting, it's gonna look like Cape Canaveral over there one of these days.

Soon it could be like - a kind of Venice. No one occupies the ground floors. We couldn't use gondolas though (Who'd wanna row though that!)
But we could have lots of sky bridges! That might be nice. :)

I bet the hipster scavengers are going to be raiding the graves for the period clothing and eye glass frames. Just what we need!

Wouldn't the polar vortex freeze the bodies in place? Or are the shifting plates nudging them up to the surface? Either way this is scary news!

They're not being nudged, they bursting up through the floors! It's crazy! Where will they strike next?

I liked this place a lot and had had many strange but delicious slices here. Very very sorry to see it go.

Very sad. So many great vegan/vegetarian restaurants have closed in the EV in recent years. I even hear Angelica Kitchen is experiencing problems and may have to close. Hoping it's just an unfounded rumor.

Oh no! Bodies are bursting up through the floor of Angelica Kitchen too!