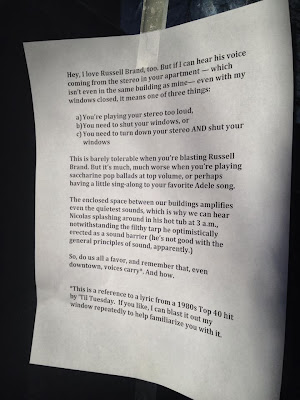 Spotted over on East First Street… The note starts off with the suggestion that someone in an adjacent building is playing Russell Brand a little too loudly on the stereo. Not that this is the worst offense.

"[I]t's much, much worse when you're playing saccharine pop ballads at top volume, or perhaps having a sing-along to your favorite Adele song."

There's also a reference to the mysterious Nicolas who splashes around in his hot tub at 3 a.m., and "the filthy tarp he optimistically erected as a sound barrier."

The missive ends with, "So, do us all a favor, and remember, that even downtown, voices carry*. And how."

A 'Til Tuesday reference!

"Voices Carry" is a fine song from 1985 …whose video features one of the greatest Assholes in Music Video History. Let's watch! (And it's fine to get up and sing just like Aimee Mann during the finale at Carnegie Hall!)

Well done, Urban Etiquette Sign. Sarcastic and funny while still making a point… with a little music lesson to boot.
Posted by Grieve at 5:30 AM

Love that video and the fact Boston was "passing" for New York.

Yay! A 'Til Tuesday reference.
Boo! The lyric reference is wrong.

i'd be remiss if i didn't mention Aimee Mann's excellent shot-for-shot remake of the Voices Carry video for "Labrador."