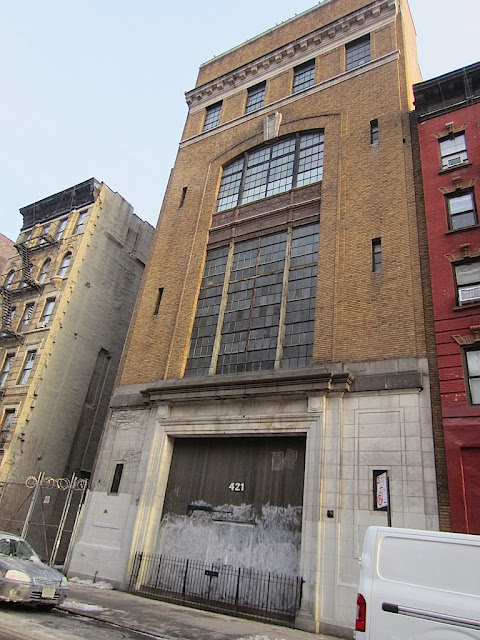 Famed sculptor Walter De Maria died last July at age 77. De Maria owned one of the most intriguing buildings in the East Village — the mysterious 421 E. Sixth St. between First Avenue and Avenue A. The building was a Con Ed substation built in 1920. (NYC Songlines described No. 421 as "a giant-robot laboratory.") De Maria bought it in 1980 to use as a home and studio.

We had never seen any photos of the interior … or met anyone who had been inside. Who is up there? What is up there? 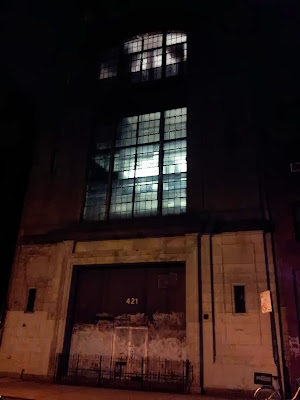 We were curious what would happen to this after his death. (After all, it was our dream home.)

Well, Robin Finn at the Times has the story: The building and adjacent lot are ready to hit the market for $25 million.

Meanwhile, the Times got a look inside… and it is as amazing as we expected.

In keeping with his Minimalist philosophy, Mr. De Maria left the substation’s industrial origins intact: An impressive grittiness prevails throughout the raw space. Major improvements were confined to the overhead lighting that illuminated his room-size installations.

Even the elevator is a vintage artifact, as is the Viking stove in the bare-bones kitchen where he cooked steak and vegetables. But mostly he worked, dreaming up installations like Bel Air Trilogy, an assemblage of three classic, two-tone (red and white) 1955 Chevrolets, each with a silver stake embedded in its front and rear windshields. A two-story ramp at the back of the property made it possible to take the cars, and other huge objects, up to the second-floor studio. 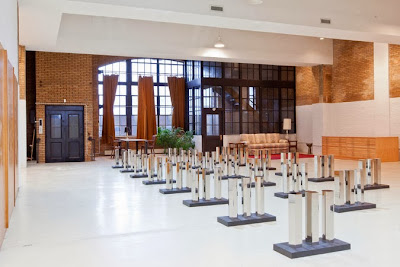 There are a lot more photos on the Times website.

The sale will include the lot next door. 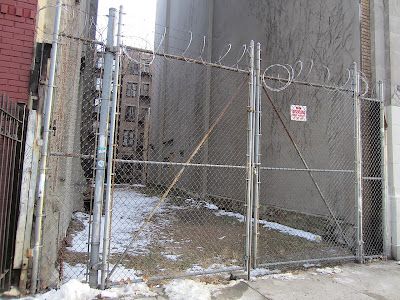 The sale also includes an unimproved lot at 419 East Sixth, a 7,920-square-foot expanse of grass and gravel partially enclosed by a chain-link fence with the potential to be repurposed into gardens, a noncommercial gallery, a garage or townhouses.

The mind reels at what a developer might do to/with this.

What is your East Village dream home?
Posted by Grieve at 5:30 AM

I always wanted to pitch a yurt on that lot

Since only one person lived there, it wouldn't require much conversion. They could probably sell it as-is.

Someone with a lot of money is going to ruin this really quickly and its going to be shitty. PREPARE for the worst

I just need to borrow (er, have) a couple bucks from a few million friends...

Would love to see the inside of this place. It would be cool if it could still be used as some type of art gallery/workspace.

I always loved that building. It's a shame that it will be town down for an insta-condo.

Someone (his wife?) still lives there, as the light on the left of the building's lowest level is generally on at night. I also saw the mailman deliver mail to the building last week.
WD was famously misanthropic. As I walked by one day about ten years ago, he stuck his head out evidently looking for something. I spoke to him and he scowled and slammed the door shut.

Anyone have any Philip Seymour Hoffman stories?
Bill the lib. anarchist

this is the correct link to the Times photos of the interior. amazing.... I will totally lend you the money... (ha ha)

Wow the inside is even better than I imagined.

Super sick. I'd hate to see the heating bill though...

Since childhood I have wondered what was inside that building! This is so awesome! Like finding the Titanic for me! lol

I'm sorry. All these years of suspense, I actually expected something a lot cooler.

I honestly don't think they're going to tear that down (call me an optimist…)
Way to costly to demolish that thing. And the prices they'll get as ultra-luxury industrial loft conversions will rival prices in Tribeca.

I move to the EV in 1981 and live on 6th @ C and passed this place a million times and never thought I would ever see what was happening inside, thanks for ending my speculation.

I really , really want to live there, a lot. I'd let anyone willing to back me stay there as well. Just don't tear it down. The mystery and ominous facade make walking to work (never home, I walk on B, or 1st straight past} a lot more fun. It puts the places in my imagination to work that normally would be flat.And if we lose every mystery in our city, why not move to Portugal?

I use to walk past this bldg almost everyday and I would make up all kinds of stories about what goes on in there and who lives there. A lone window at the very top would always be lit late at night when the rest of the bldg would be dark. The story I always stuck with was a mad scientist lived there who worked on his formulas into the wee hours of the morning upstairs in that room... Wow, I can finally stop guessing. Thank you for posting!

In case you guys hadn't heard, these days the giant robot factory is over at NYU.

The top light is still on at night. I've never seen it turned off actually. Where is his wife? Can't some gallery/museum preserve it? He was pretty well known. I used to see strange notes posted there late at night....

I actually walked in there one time. I rang the bell and no one answered, but the door happened to be open so I walked around for 10 minutes. Until someone came down from the elevator and told me I was trespassing.

Because you WERE trespassing, J. B.! You're lucky you weren't arrested.

i'm buying it and converting it into my batcave. that or i'll start up a ghostbusting business there ... cause i'm batman.