137 Avenue C, hollow on the inside 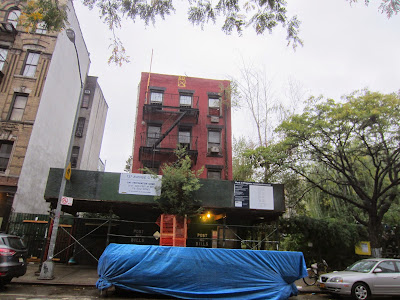 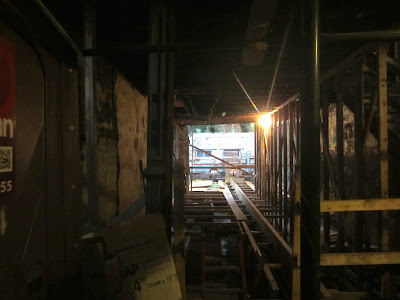 As previously reported, there's a building-wide gut renovation underway (obviously), which will see the addition of an extra floor all via architect Ramy Issac.

The renovations include shoring up the exterior wall … which resulted in the (temporary) destruction of the sliver of a garden to the south of No. 137... 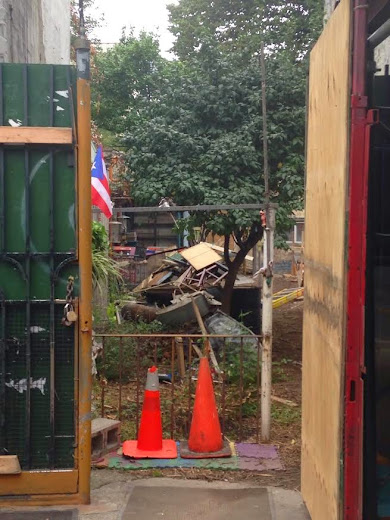 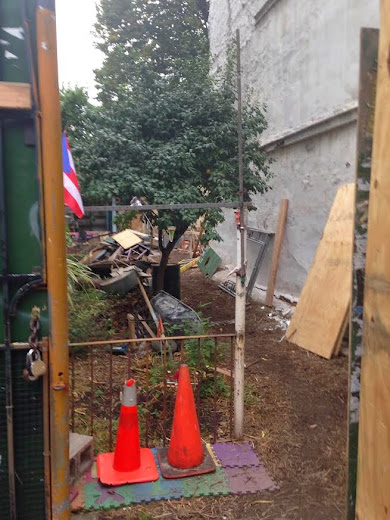 As we understand it, the regulars who tend to the garden are unfazed by the construction. They were made aware of it and plan to restock the garden once the work is complete next door.

One last note. The ground-floor space was previously home to the Sunburnt Cow, which closed on April 27 after 11 years.

There is a potential new tenant for this storefront. An attorney for the applicant had filed paperwork with CB3 for the October SLA committee meeting, accidentally citing 137 Avenue A on the paperwork. (Result of the confusion is here.) The applicant subsequently withdrew for the October agenda.

Previously on EV Grieve:
Renovations in store for 137 Avenue C, home to the Sunburnt Cow

The Sunburnt Cow closes for good at the end of this month
Posted by Grieve at 5:01 AM

I cannot believe this building or what's left of it is worth the trouble of saving. It leans, is not supported on either side and to engineer a structure to withstand the weight of additional floors seems like a true waste of money. I'm curious of the what the facade will look like once or if the drawings are made public.

8:44-
I believe this may have to do with the ease of getting the permits etc. for rehabilitation approved as opposed to demolition and rebuilding permits. At least that's was I was told when a similar project went on on my block where a rickety old building with no especial aspects was completely gut renovated, which took ages and was a giant pain in the ass to do, it seemed obvious that it would have been easier, cheaper, faster to just knock it down and put up something new, plus instead of the old 120 year old heavy timber framing you would have nice modern steel. When I asked the foreman on the job he said it had to do with the permitting process. Not sure he knew what he was talking about, but anyway.

They'd probably be issued faster in Havana, Cuba, if they ever necessary in the first place.

Bill the libertarian anarchist and enemy of gubment

A friend once told me he was at sunburnt cow when a patron took a shit in his shorts while sitting at the bar, continued to talk to the bartender like nothing happened.