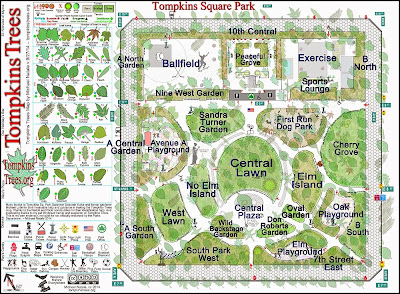 Longtime LES resident Michael Natale has been keeping tabs on the trees in Tompkins Square Park for the past three years.

He's looking for some help in naming parts of the Park for his map. He explains in a recent post at his Tompkins Trees site:

I’m working hard to get my Tompkins Trees map ready for printing. I’d like community feedback on the names I’m using on the map for the various areas of the map before printing. Most of these areas don’t have official names from the Parks Department or its employees. There are a few that do such as The Sandra Turner Garden, The First Run Dog Park, and The Don Robert’s Garden. Other areas such as the Avenue A Playground, the Oval Garden, the Central Lawn and Central Plaza are commonly used. I’ve given names to the other areas, or Islands as I call them, they are mostly the fenced in areas of the park. I needed to name these areas to keep track of the various trees as I identified them.

Peaceful Grove, the area behind the Park Office, that was formerly reserved for children. Now it is used as a picnic area, and for quiet meditation and Tai Chi. There are also sprinklers for the kids in the summer.

I’m not sure if there are official names for the two smaller playgrounds. I’ve heard them called the smaller and larger playgrounds on B. I call them the Oak Playground and the Elm Playground because of the predominating trees surrounding them.


You may ahead over to Tompkins Trees if you have any suggestions.
Posted by Grieve at 4:59 AM

This map is the best! Thank you, Michael!

South Park West could be named "What the Bowery looked like".

The mound on the East side of the Central Lawn should be called Hepatitis Hill.

Why not call the basketball courts "the basketball courts" and the handball courts "the handball courts" so that those without maps know what's being referred to? (Meet you at the Exercise. Where's that? You know, the basketball court. -- Giving names to gardens adds distinctive useful information to otherwise difficult to describe locations, calling all the courts "Exercise" subtracts useful information from what would otherwise be easy to identify.)
I'd suggest that the monkey bars between the courts be called "The ParKour" since, being the most complex monkey bars in the city, they attract parkourists from all five boroughs and are internationally known through many youtube videos. Also it would be a cool name and would record an interesting history for future generations.
The "Central Plaza" is also useful, but I'll still call it "The Non Bandshell." (-;
The 9th Street walk through should have a name too. If 1:13 hadn't beat me to it for the old Slavic Corner, I'd call the 9th Street pass "The Little Bowery."
Thanks for your beautiful work, Michael!

What you are calling the peaceful grove we call the quiet area.. It is a also a playground btw.