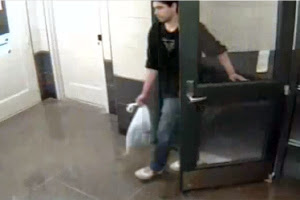 The NYPD has arrested a suspect wanted for the attempted rape of a 20-year-old woman in an elevator at 600 E. 14th St., the Town & Village Blog reported.

The incident occurred around 4 a.m. this past Friday. The victim reportedly screamed and struggled with her attacker, causing him to flee. Security cameras showed the suspect escaping from the building by climbing down a tree to street level.

The NYPD are investigating the suspect for other crimes as well, according to DNAinfo.

The Villager reports that Scott is a cousin of Rosario Dawson. Her mother and father and other relatives still live at 544 E. 13th St., The Villager points out.

My guess is that somebody saw the video and identified him.

And I thought this was usually such a nice safe neighborhod. After all, it is Midtown South.

I heard from a neighbor that his aunt identified him and turned him in. Good for her.

he lived in his mother's basement, again the cliche comes true.

"After all, it is Midtown South."

Yes, as per the Death Star. But it is mostly Murray Hill South in spirit and in the businesses that cater to that neighborhood demo/style.

What a wild tale, they should make a documentary about this building and call it Nightmare on 13th St. Rosario Dawson always likes to brag in interviews about how she made it out of a squatter building in the East Village, but little did we know her own family is still living there living without heat, gas or hot water, something she strangely never seems to mention. So much for having street cred.

Its actually a nice place, just because this kid is a bad person, you are attacking the squatting moevment. And people say i am advocating class war. (I am but so are you)

There are a lot of issues with this story. I don't get how the Dawson family believes it is okay to partner with a private developer, so they get cash and the neighborhood gets lux housing. Can't their kid just write a few checks to help them raise the funds they need to bring this building up to code? the DiBlasio Admin needs to create new units, not count units that are already affordable but are being poorly managed.

At least Rosario Dawson should stop bragging about how she grew up in a squat and made it out of the 'hood to become rich and famous when her famiy is still living in a building with no heat or hot water. She sounds like Jenny from the Block who won't even go back to the Bronx without an armed escort.

why did this become an occasion to trash Rosario Dawson? Of course her family still lives there, why wouldn't they? She is from the neighborhood, she does not need to prove it, to gain "street cred" ugh, ... it's just a fact she's not bragging and unlike JLo, who someone here compared her to, she does a lot for girls in the neighborhood she is very involved.

It's only an issue now that her cousin was arrested for being a serial rapist. This same EV squat is the home she grew up in but left behind her people who are still living with no heat or hot water while she lives in a huge mansion in LA. She talks about it like it was something romantic but her own family is still living right here in third world conditions. It just makes you wonder what some people's priorities really are.