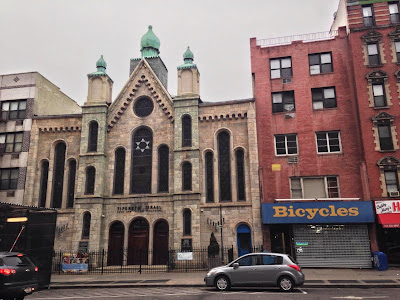 48 years later, East 14th Street synagogue to be considered for landmark designation
Posted by Grieve at 5:00 AM

It's no longer a viable space for the congregation and all the community programs they do. It looks nice from the outside, but what will landmark status do for it's actual usage? (and I say that as someone who hates to see historic buildings get torn down).

Town & Village Synagogue is a community and a building.
We are an active, egalitarian Conservative Jewish congregation serving Lower Manhattan with pride. We recognize the LPC’s designation of our building and honor the work that has been done by both the Bloomberg and the DiBlasio administrations to carefully review and deliberate on our status. Their decision is a testament to our building’s rich immigrant history in NYC.

Our commitment remains; to serve the 400 families who are the core of T&V and to support the greater community of which we are a part. We look to the men and women who championed Landmark designation to continue their loving support of Town & Village Synagogue. May we work together to strengthen this building so that it will be a beacon of spiritual strength, a center of Jewish learning and a jewel on 14th Street for generations of New Yorkers yet to be born.

It seems to me to be unAmerican for an outside group to take control of a community institution against the will of that community. Would those who supported landmarking want to kick out the congregation and turn the building into some sort of museum in remembrance of some remote past. How sad that the landmarking constraints are being forced upon this living thriving community.

Every building that's been landmarked has been done so as an effort to atone for the destruction of the old Penn Station, but nothing will bring it back. I do not want to live in a museum!

Hooray for landmarking! The architectural heritage of New York City belongs to us all. That's why the Landmarks Preservation Commission exists, and it attempts to balance the rights of property owners and the public. Private property owners get plenty of consideration from the LPC, and in our society in general. The times here and there when important things are preserved are essential to our memory, culture and identity.

Meanwhile, this city is in the midst of an unprecedented building boom, and constant churn of every kind -- it obviously is not becoming a museum.

Many owners of landmarked properties are delighted with the value that comes with that designation. I believe the congregation leadership will come around; there is already a diversity of opinion in the membership.