This might be the first time that we recall an album-release party at an ice cream shop.

Here's the message via the Mikey Likes It Tumblr:

This Monday Nov. 24th, we will be hosting the release of Eminem’s newest album “SHADYXV”. We’ve collaborated on a flavor sharing the same name that screams Detroit. SHADYXV is made with Motor City ingredients: Michigan cherries, Sanders hot fudge and Vernors ginger ale. To make this an even greater event, Slaughterhouse will be in the shop with the meet and greet. The event will take place between 4pm-8pm. We suggest all interested in attending arrive early. This will be a great day for Eminem fans. You can meet Slaughterhouse, pick up the double disk and a double scoop.

Slaughterhouse is on Eminem's Shady Records label … and featured on the two-disc Shady XV.

And ahead of the release party, the NYPD dropped off enough barricades to cover a parade… 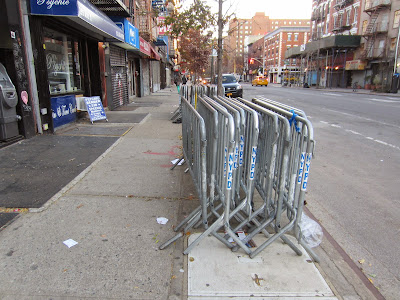 I saw those barricades stacked on A yesterday and said, "What the fuck is it NOW."

But I like Mikey (heh) and wish him all the luck—and this is a pretty big coup for him—so maybe I'll just stay late at work tonight ;)

I'll pass on celebrating the rapper with the notoriously misogynist and homophobic lyrics.

Yes, 9:13 -- Mikey shows how to do BUSINESS. Gotta hand it to him. Compare his verve to the lame gelato place in the same space that came and went in no time. Not every small business deserves to stay in business forever ... ya gotta WORK.

I wonder if the biscuit boys ever look wistfully out their fancy windows across the avenue and ask themselves where it all went wrong.

Will they serve ice cream with M&Ms on it?

It's a bona fide mob scene out there!

Trixie, A mob scene? Did you mean for this comment to go under the DeRoberti's story?

lol @anonymous 6:23pm. No, it was as quiet as ever a DiRboberti's today, but it was a regular mob scene outside of Mikey's.