Native Bean will be moving on Avenue A 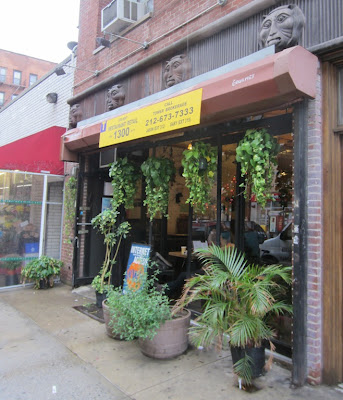 The Native Bean space at 50 Avenue A between East Third Street and East Fourth Street has been on and off the market since September 2011.

Now EVG Facebook friend Steve Fagan shares some good news about the cafe's future. The Native Bean will be closing up shop on Nov. 26 ... with a new home lined up at the former space that Angelina Cafe used before moving across A.

The Native Bean is hope for a seamless transition ... per the signs up in the space... 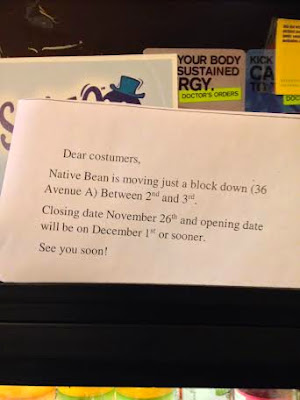 Native Bean space apparently back on the market
Posted by Grieve at 5:10 AM

Email ThisBlogThis!Share to TwitterShare to FacebookShare to Pinterest
Labels: 50 Avenue A, Native Bean

Oh lord tell me we're not getting a goddamn bar in that space. Because I live across the street and it's already like twenty million jet engines' worth of WOOOO decibels on the weekend, thanks to UCB and barcrawling street traffic.

I love the guys at Native Bean! I hope the move goes smoothly. I will support them wherever they go. And, Hey, finally they will have HEAT and AC!!

Now, that is what can be called a perfect move.

i LOVE that place. It's one i have made a point to continually visit because it means so much to have an establishment like that in a neighborhood; with wonderful people, good food and such a great atmosphere. I do hope people make the effort to go across the street and keep this place going..

REALLY happy they are only moving down the block.

Good food, nice, neighborly people, glad they are staying close! Now, as for the losers who sit on their fucking laptops all day so I can't sit and eat. fuck off you annoying, selfish users.