Q-and-A with activist Kelly Cogswell, author of 'Eating Fire: My Life as a Lesbian Avenger' 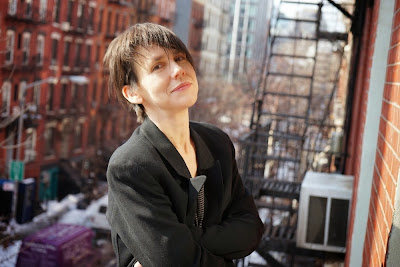 Part of her conversation will address the relationship between activism and community ... with a focus on the importance of the neighborhood on the Lesbian Avengers, born in 1992 from the queer arts and activist scene of the East Village.

Ahead of the talk, we asked Cogswell, an independent journalist, about the start of the Lesbian Avengers and the neighborhood today.

You came to NYC for grad school. Did you always have aspirations of moving here, or was the decision a little more random?

It was partly random. I'd applied to two or three different places and I could have ended up in Arizona instead of NYU. I did know I liked New York. I'd visited a couple times before and I really felt at home. There were just so many different kinds of people. Different attitudes. You could walk down the street in an enormous Mohawk or in pantyhose and a skirt, and either way nobody gave a crap. For somebody like me, it was a real relief.

What role did the East Village play in helping create the Lesbian Avengers?

I'd say a huge role. The neighborhood had everything you needed to build a successful lesbian direct-action group. First, there were still a ton of dykes in 1992, though there'd been even more before. The rent was relatively cheap, and five of the six founders actually lived here.

The Avengers recruited lesbians from all over the city, but at least in the beginning, the local networks of friends were really important. Particularly because the Lower East Side had a culture of activism. Local dykes were experienced in everything from the Labor movement, to AIDS activism to reproductive rights. They knew how to organize demos, plan zaps, do civil disobedience. Write a press release. All that good stuff.

It was also hugely important that the neighborhood was a center of dyke art — there were choreographers, dancers, filmmakers, writers, poets, musicians, painters. There was WOW (the Women's One World) Theater that opened up on East 11th before moving to Bleecker. Before them there'd been the groundbreaking Medusa's Revenge Theater.

At the time, it seemed like everybody was unraveling stereotypes, doing the work that would allow us to imagine the Lesbian Avengers — funny, sexy, angry, all at once. In fact, a lot of EV dyke artists brought their talents to the Avengers.

Do you think the environment still exists in the East Village of 2014 to produce a direct-action group such as the Lesbian Avengers?

No, not really. There isn't a strong culture of activism here anymore. It's not a language we understand. But even beyond that, I don't see tight-knit communities that have something resembling a common voice. Or common goals. Almost a prerequisite for activism.

In 1992, East Village lesbians had a clear sense of identity, and how we fit into the national picture. You couldn't escape it, whether you were involved in ACT-UP, or the EV theater scene. You just had to look around. Your friends were dying of AIDS to the applause of the Christian Right. Artists like Holly Hughes and the NEA 4 were getting attacked in national forums because they dealt with sexuality. She was getting piles of death threats in her mailbox.

A couple of months before the Avengers started, presidential aspirant Pat Buchanan actually went to the Republican National Convention and declared a Culture War for the soul of America, actually naming feminists, environmentalists, black people, and of course, homosexuals as the enemy.

In fact, he probably said something similar last week. The Christian Right is back on top, and despite some legal advances, we're still really vulnerable. The only difference is that there's no real community to respond. Not in New York, anyway. We've left everything in the hands of our institutions. And most LGBT artists have abandoned their exploration of identity. We're not doing the work that even allows young queers to imagine themselves as avenging anything, or subverting the status quo. We much prefer to fight ourselves.

You've lived on East First Street the past 20 years. What's your general overview of the neighborhood these days? NYC? Ever think about moving back to your native Louisville?

The neighborhood's almost unrecognizable, except maybe for the rats. The rats we will have with us always. The physical space of the neighborhood is changing at a huge rate. There are hardly any vacant lots. And even small tenements are getting torn down to make way for luxury condos. Junkies have been replaced by drunken NYU students. The last quirky galleries on the block have been evicted and replaced with ironically quirky galleries with gazillion dollar rents.

About moving back to Louisville, well... I visited for a few days last year after being away more than a decade and found they have a great art and music scene. And their LGBT community is actually growing! I went to a queer meet-up with something like fifty, sixty people, then afterwards, half of them headed off to a drag king show down the block. New queer bars are even opening up there. I was so jealous. Not jealous enough to move, though.

Find more info here.
Posted by Grieve at 5:10 AM

As a lesbian who has lived here for well over 20 years, I was talking to a friend the other day about how there isn't a strong gay and lesbian community in the East Village anymore and what a shame it is. I wondered if maybe there were just as many of us here but perhaps the younger generation isn't as visible? I don't know, but I miss the energy we used to have here in the East Village.

It is very frustrating to hear older activists bemoan the death of activism in the LES. Frankly it is disheartening as there are activists all over the LES dealing with the current challenges our community faces.

Each day residents of the LES wake-up to see another business that serves our residential community facing eviction so that a trendy restaurant, cocktail lounge or fratty bar can emerge; a group of our neighbors being assaulted by a greedy landlord; PS 64 being turned into a dormitory, homeless people and street peddlers being hassled by the cops; rooftop and backyard drunken parties; SantaCon and the other drunken revelry that assaults us all each and every weekend; the taking over TSP with corporate sponsored so called cultural events, etc.

In the face of this activist groups and individual activists have sprung to life. Like the folks on Upper Ave A, Lower Ave C, East 4th street, and The LES Dwellers to name a few have emerged to fight the proliferation of liquor licenses. Damaris and her crew at GOLES, Brandon Kielbasa of Cooper Square, the anti-Crowman Coalition, the 504-508 E. 11th St. Tenant’s Association, Rory Denis who remains the only tenant in the building at 338 E. Sixth St and countless other tenants who struggle to fight off the evil developers destroying their lives and the lives of our neighbors. Save Our Community Center CHARAS-64, EVCC, the garden folks and others, fighting to stop a dorm from being built at PS 64, and keep our gardens safe from development. Andréa Stella and her team at The Space at Tompkins working with the travelers who live on the streets and parks in our community. Chris Flash and the Shadow - keeping free non-corporatized concerts in TSP. Oh and Reverend Billy doing that thing he does. Just to name a few.

While the days of daily street protests and even riots may seem over, activism remains alive and well. True activists don’t go away when the going gets tough or their particular issue isn’t as dire anymore, they find another cause to join. So I would encourage the author and other activists from back in the day to join those of us long-time activists still here and the new activist who have joined our ranks to lend your skills, voices and wisdom to the battles we face every day.

times have changed...an activist scene will calm a bit as the crisis eases. there IS still plenty of work to do, though.

Agree with the last answer. NY living used to feel like a trade-off: you put up with the rats and the squalor because you felt like you were getting so much in the plus column. Not anymore.

10:20 a.m. - Bravo!
This IS an incredible activist neighborhood. The forces we little people fight are as powerful as can be: global and monied. Yet we fight -- yet we succeed, oftentimes.

To the poster above who says it is is very frustrating to hear older activists bemoan the death of activism in the LES, I applaud you for being involved in the community but the folks behind any of the actions you mention would likely admit to you that they wish they could get the level of participation they got back in the 1980s and into the 1990s when activism was so widespread in this area. People were willing to get involved. The people doing good work today aren't getting anywhere near the support and participation they need. But good on you for being one of the people who is involved.

Sadly, people think leaving negative comments on blogs is what activism looks like these days.

This was a great interview. I love getting to know the people in the neighborhood!

Why are all these comments posted by people named 'Anonymous'? Too scared to put a name to your opinion?

Walter, unfortunately in this time of electronic footprints it's caution that makes people anonymous. Big brother or future employer's, landlord's...are watching. And they are some uptight mo fo's!!