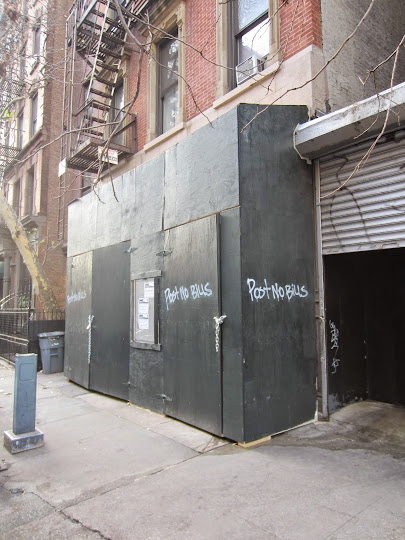 The buildout continues at 204 E. 13th St., just east of Third Avenue and across from the former Mystery Lot Jefferson.

Bruno Pizza is the new tenant. And Grub Street and Eater have more details on what first-time restaurateur Demian Repucci has planned for the space.

In addition to serving Neapolitan pizza, he has hired the two chefs who created the tasting menu at Box Kite Coffee on St. Mark's Place.

Repucci is still working out all of the details, but for now, he plans to make the tasting menu a reservations-only option for just a handful of seats at the restaurant. The space is much larger than the tiny Box Kite, but to keep the intimate relationship between chefs and diners, Repucci built a 20 person bar looking into the kitchen and a few special seats right at the pass, where the chefs will cook.

As we reported back in May 2013, Repucci, a restaurant designer, planned to open his pizzeria at 223 First Ave., where Birdbath Neighborhood Green Bakery vacated. However, the lease fell through, and eventually Mee Noodle Shop moved in.
Posted by Grieve at 4:32 AM

Lucky for us the deal fell through. We have Mee!

And I don't know about you, but when I go to a restaurant, it's usually to have dinner, not an intimate relationship with the chefs.

"... but when I go to a restaurant, it's usually to have dinner, not an intimate relationship with the chefs." Brilliant comment. I remember a time when the word 'chef' was reserved for a few snobbish places on the Upper East Side, which I could never afford to set foot in. Everyone South of them was called a cook.

If the chefs are having intimate relationships with their customers then all I know is somebody better wash their hands.

Gojira, just make sure when you go there to never order the tossed salad.

Um, sorry folks, but those last two posts supposedly by "Gojira" were, in fact, not posted by me, the real Gojira. It was probably Gamera, posing as me. Stop it, you lousy turtle!

Yo Gojira,
Does that mean you don't actually like tossed salad?