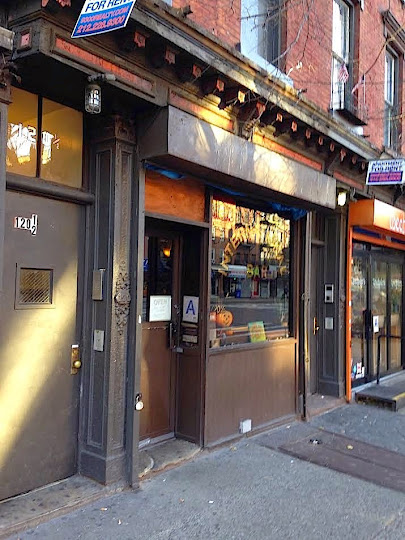 Back in September, we reported that the International Bar was hoping to move next door from its current home on First Avenue to the former South Brooklyn Pizza space.

Preparations to move the bar and add a pizzeria with slices to go here between East Seventh Street and St. Mark's Place are underway.

Meanwhile, there are also plans to turn the soon-to-be-former International space into a seafood market.

International owner Molly Fitch, who along with Shawn Dahl, reopened the bar in June 2008, said that the new venture at 120 1/2 First Ave. will be called The Liquor Seafood Market + Bar.

With time left on the current lease, Fitch said that she wanted to "open a much-needed place to get fresh fish in the neighborhood."

During the day, the space will operate as a traditional retail outlet for fresh seafood… and in the evening, the market will give way to a more traditional bar-restaurant environment with a 2 a.m. closing time. (Amended this last sentence to add the restaurant part and closing time!)

Fitch shared part of a sample menu with us. 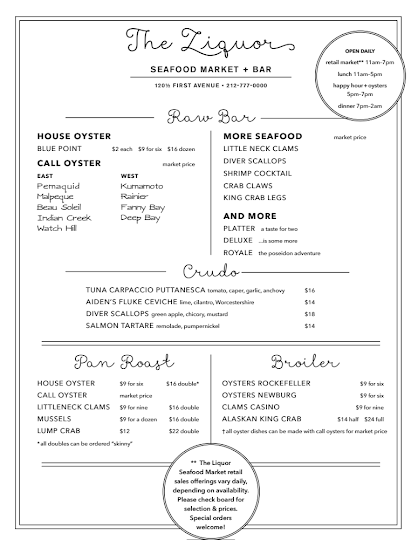 Helping Fitch with the market is Sebastian Jaramillo, a former chef with Porsena on East Seventh Street.

CB3's SLA committee will hear plans for this alteration during tonight's monthly meeting.

Previously on EV Grieve:
The International eyeing move next door to the former South Brooklyn Pizza space
Posted by Grieve at 5:30 AM

So are they only going to be selling cooked fish? Or did I miss something?

Gojira "During the day, the space will operate as a traditional retail outlet for fresh seafood… and in the evening, the market will give way to a more traditional bar environment — kind of like the International. "

I love the idea of a fish market! We need this kind of thing in the neighborhood, especially since we lost the fish market on 13th and 1st all those years ago.

Actual fresh fish to take home and cook? Right here in the neighborhood again? Yay! It's been so long.

Honestly, this sounds like its going to be a bar and restaurant and they just added the retail to get community support.

There used to be a wonderful fish monger on First Avenue between St. Marks & 9th Street on the west side. Eventually they had to expand to include a sushi bar.

We welcome a fish market. Please also include flounder, and sole, and salmon. I think it's great that it will also be a restaurant. That will help pay the rent.

Looking that the menu it seems like it's a restaurant/bar first and a market second (or third). How many times have we seen proprietors pretend to be one thing to get approval and open something different? I'd be interested to see how much retail they actually end up doing.

Has International Bar been
" CROMANATED " because if you look at the photo you'll see Steve Croman's " Apartment for Rent " signs plastered on the building. Yuk!