What East Village bar has the oldest liquor license? 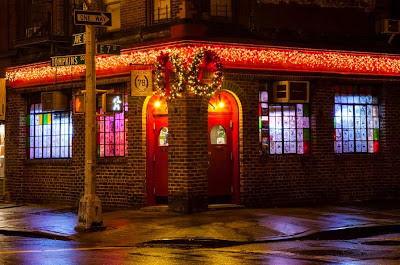 OK, the photo gives it away, of course.

Anyway, some interesting research via I Quant NY, who examined the data on New York State's open data website.

The oldest recorded NYC license in the dataset belongs to the Harmonie Club on E 60th St in the Upper East Side, though you have to be a member to enjoy a drink there. It dates to 1933. The oldest beer license is for Nathan’s Famous in Coney Island, which dates back to 1934. And the oldest liquor store license is from 1941, and it belongs to North End Wine and Liquor in the Bronx.

And in the East Village, the oldest license belongs to Vazac's/7B/Horseshoe Bar, which dates to 1948.

But what about, say, McSorley's?

Per I Quant NY:

Note that this does not mean these are in fact the oldest bars or restaurants, but rather the oldest with a single continuous liquor license and a proper start date on record.

McSorley's has changed hands a few times, he explains, the last being in 1977, when the state issued a new license.
Posted by Grieve at 6:30 AM

Email ThisBlogThis!Share to TwitterShare to FacebookShare to Pinterest
Labels: 7B, liquor licenses, Vazac's

Nothing against this establishment, but I'd appreciate it if they'd never do another film shoot there. It's really annoying when several blocks are shut down by the filming trucks. The noise is also atrocious.
Last year another resident from our block (6th St. bet. A&B) and I met with the film people on 54th St. and lodged our complaint. Maybe it did a bit of good, as we haven't had as many shut downs as in past years.

Oh my god the noise is too much for me!...in the biggest loudest city in the world. I'm gonna go file a comaint!

The building we currently reside in ( formerly Superdive) used to have a liquor license that we of course did not renew. We know they are hard to come but but perhaps the EV has enough bars as it is.

Are you sure you don't want a puppy beer pong event , ABC?

I'm all for less bars....as long as places like 7b, Monas, DropOff, St Dymphnas, and Josies are still going. And Lucy's. Oh and 11th st. And horse box.

I do not have a drinking problem. (Repeats ten times)